These plants bring all the birds to your yard 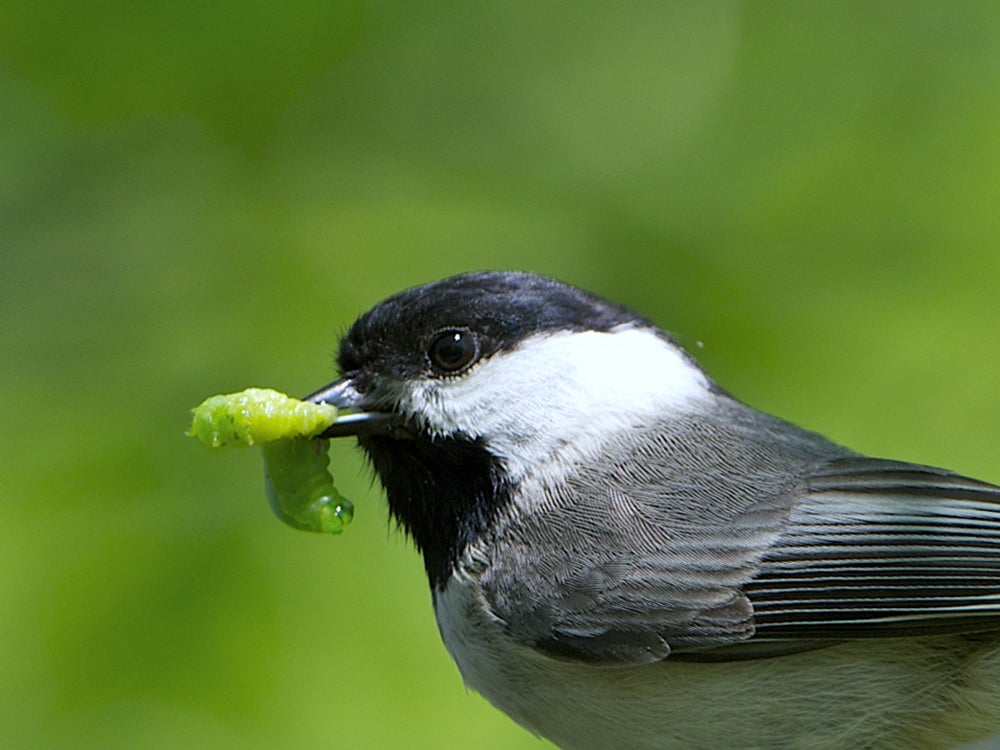 Carolina chickadees depend on the availability of high-calorie, high-protein prey, such as caterpillars, for a healthy breeding season. Doug Tallamy, University of Delaware
SHARE

Like songbirds? Right, many people do. It’s a different story when it comes to insects. Mention caterpillars, for instance, to most gardeners, and you’ll have them squirming with horror. But backyard species like caterpillars and spiders actually play a crucial role in supporting our most beloved bird species. As a new study from University of Delaware postgraduate student Desirée Narango and coauthors demonstrates, native plant gardens are quite literally for the birds. It’s the largest comprehensive study to date of the effect of native plant species on a specific species of bird—the Carolina chickadee. It’s also the biggest single piece of research to come out of years of fieldwork during Narango’s PhD, she says, and it offers a tangible goal for conservation-minded individuals to work for in their own yard. That goal is a number: 70 percent. By studying more than 160 yards, Narango found that suburban lawns with at least 70% native trees and shrubs were able to sustain breeding chickadees. Yards with less could sustain adults, but those adults weren’t reproducing at replacement rate, meaning the population was falling. Why are native plants important? When it comes to birds, it’s because those plants have coevolved with local insect species—creepy crawlers that the birds themselves evolved to thrive on, says University of Maryland ecologist Karin Burghardt. Burghardt previously worked with Narango’s coauthor, University of Delaware professor Doug Tallamy, but she was not involved with the current study.

“We think about birds [in human landscapes] as mostly needing birdseed,” Burghardt says. But work over the past decade paints a different picture, one that points to the importance of insects for many. However, the vast majority of plant-eating insects are evolved to only eat a small number of native plants, which means that in gardens without the foliage of choice, they’re not around.

For human gardeners, as well, introducing native plants and seeing the wildlife—from caterpillars and other insects to birds—they attract can be “a pretty rewarding process,” Burghardt says. She recently bought a house, where she’s in the process of redoing the garden with native species. Gardeners who do the same will quickly see results, she says, and know that they are providing homes for wildlife, from the crawly to the flappy.

Narango says that the 70 percent number that works for the chickadee is a baseline. “Almost all terrestrial songbirds require insects to raise their young,” she says. The more insectivorous a bird, the higher percentage of native plants it seems to need for those insects to live on. The Washington, DC backyards she monitored were part of an existing citizen science project called Neighborhood Nestwatch.

Doing fieldwork is often no simple task, particularly in urban areas, says Tallamy. He’s been working on the problem of backyards for more than a decade—Burghardt was his coauthor on some of the work that originally demonstrated the relationship between native plants and insects. Tracking hundreds of yards and birds “is not easy stuff,” he says.

In this case, each participating yard got a nestbox, and homeowners monitored the box from the first week of April through June to see if chickadees moved in for their breeding season. Narango and her field technicians also visited the yards of neighboring houses to see if chickadees that were feeding in the backyards they studied were actually nesting close by but not in the yard itself.

Their results show something that hasn’t been seen before: a comprehensive study of the effect of non-native species of plants, higher up the food chain, Tallamy says. It takes a story he’s been working on for a long time and stretches it “to the next trophic level,” he says, by looking at the birds who eat the insects.

“These simple choices on what people are planting can really have profound consequences on the birds that are living in these yards,” Narango says. Those consequences stretch beyond nesting birds and to the migratory birds that pass through on their long journey from the tropics to Canada’s boreal forests each year. They might only stop in a yard for a week, but they’re looking for high-calorie, high-protein food to sustain their next great hop—just like the nesting birds that need extra to raise young. If they can’t find food on their stop, that week “could be the most important week of their life.”

The new study does a “meticulous” job of defining what insects can do for birds, says Burghardt, but it’s important to remember they’re more than just food. “I think that they have value in and of themselves,” she says. They’re part of a web of life evolved long before we started bringing non-native plants to our gardens. They also have the potential to enrich gardens, says Nancy Vehrs, president of the Virginia Native Plant Society. “There’s more to a garden than just the plants,” she says.

How do I make my yard bird-friendly?

Supporting native species in your garden is absolutely achievable, Vehrs says. Here are some of her top tips, and a few from the California Native Plant Society.

Do research: Not sure what to plant? Many states have native plant societies that release suggestions, and the USDA Forest Service has a lengthy guide to help you find your local one and other helpful resources.

Plant trees: Planting native species of tree in your yard is the best thing you can do to support biodiversity, according to Vehrs. Native oaks, cherries, and willows are at the top of the list, Tallamy says.

Or don’t: You don’t have to make gardening your fulltime hobby to support local wildlife. If you don’t care about your yard, Tallamy says you should establish native plants and then leave it alone. CNPS recommends hiring landscapers who specialize in native plants and letting them do their thing.

Related: The best gardening tools for keeping your yard lush without the waste

Don’t worry: “There’s a native plant for any kind of garden,” says Vehrs. Need something that loves sun, or hates moist earth? The good news is, there’s a plant for that. A lot of people think that native plants are easier to grow than non-native ones, she says. “Once established after year one, they can usually thrive on annual rainfall alone,” the CNPS reports.