We sort through the garbage heap 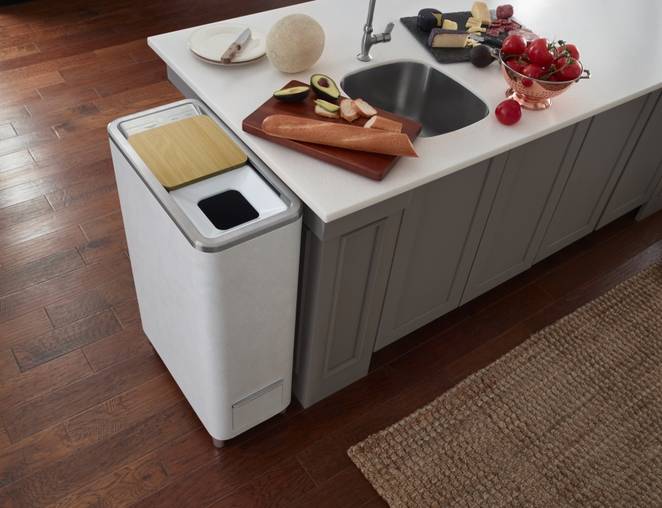 Every year, billions of pounds of apples, wheat, corn, and other food is harvested for Americans to consume. But as much as 40 percent of this bounty is wasted, according to the U.S. Department of Agriculture.

This isn’t just a waste of time and money. When egg shells and orange rinds are thrown away, they often end up in a landfill. There, amidst old diapers and frayed t-shirts, they slowly decay and emit methane—a toxic greenhouse gas—right into the atmosphere.

Thousands of Americans have attempted to tackle this problem with composting, a process that turns food scraps into soil. In urban spaces, they drop off their food waste, collected over the week, at designated sites that process the food for them. In the suburbs and rural communities, many families manage their own pile right in their backyard, chucking corn cobs and other bits and bobs out as they go. But developing healthy soil that can fertilize future plants can take years of sweat and tears, whether it’s down in your yard or by a community garden.

That’s why the team at WLabs—which sees itself as a sort of hip, consumer-focused startup space within the 106-year-old washing machine manufacturing giant Whirpool—is tackling food waste themselves. This summer, WLabs’ Zera Food Recycler hopes to hit its three test cities—Chicago, Austin, and San Francisco—with an eco-friendly bang.

The recycler processes eight pounds of food waste each week. Families can plop their scraps in each day, or at the end of the week. Within 24 hours of powering it up, those eight pounds of waste are transformed into two pounds of fertilizer.

“We have found that the 24-hour processing time is a huge wow for consumers,” says Kelley Rich of WLabs’ business and marketing team. When she shows people samples of the Zera fertilizer, some ask her if it’s really from the machine. “It does, at some level, seems too good to be true… But it is true, that is all actual output.”

To create a usable fertilizer, the Zera runs several operations in its day-long cycle, says Tom Latack, the mechanical engineer who worked on optimizing the machine’s performance. When you put food waste into the Zera, a rotating blade breaks the food down so that the nutrients essential to plant growth will be readily available. The heater and dryer kick in to wick away moisture. Last, coconut husks and baking soda are mixed in to thicken the mixture and lower the acidity of the product.

The design was developed over five years of testing, the engineers say. “We’ve had a learning process from that point until now with many different bends in the road,” says WLabs senior engineer Scott Sichmeller. “If you look back at the version of Zera from 2012, [it] would be unrecognizable today.”

But the work has paid off, the team says. They’re able to produce a homemade fertilizer with the right nitrogen, phosphorus and potassium to successfully grow new plants—at least in the WLabs greenhouse. But, “what we get isn’t equal to compost,” Rich says. “It’s immature compost, or homemade fertilizer, it’s not fully developed. But the good news is that when you spread it on your lot or garden, it gets activated… and finishes that composting process” over a few weeks outside.

Jonathan “Farmer Jon” Scheffel, founder of Chicago’s Healthy Soil Compost, remains cautious about the product. Scheffel and his small team bike around Chicago collecting food scraps from local households. Every day, they fight an uphill battle to educate people about the value of composting and to inform them of the real challenges of the process. He’s had more than one client who thought making a pile of food in their backyard was all composting required, instead of intensive sorting, management, aeration and the like.

“I think [Zera will be] just… like fitness equipment,” he says of the machine, which he has never tested. “People are going to get it and be excited if they do get it. But they’re going to realize it doesn’t work like they thought it does, and that it takes a little more effort than they think.”

And like a lot of fitness equipment, the machine is pretty pricy: the unit itself costs around $1,200 and requires a variety of regular add-ons, including the additives and air filters used to contain any whiff of the waste sealed inside. Scheffel’s services, meanwhile, cost just $10 a week for pick up and processing of a 25-pound bucket of food waste. If you switched from a weekly pickup service like Scheffel’s to the Zera, it would take you about three years to break even.

But although it has more upfront costs, the Zera has one key advantage over older methods. “Zera can take 95 percent of all household food items, including meat,” Rich says. This differs from outdoor piles—including Scheffel’s—where meat is typically discouraged, because it attracts maggots, roaches, raccoons, and even neighborhood pets. “The only thing we don’t recommend people put in the device is large bones and pits,” Rich adds.

It’s tough to say what Zera’s impact will be until it’s out on the market and quietly processing waste in kitchens across America. Perhaps some demographics who otherwise turn their noses up at composting will be won over by the sleek device. And maybe a few of them will actually use it for more than a week. But Scheffel already knows what traditional, local composting can do: create jobs, enrich local soil, and, when done right, even fosters community. Plus, composting is “such a natural process,” Scheffel says. “There’s no other way to do that.”