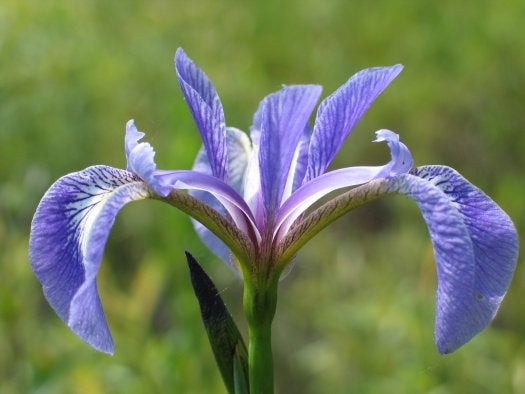 It is astonishing how soon and unexpectedly flowers appear, when the fields are scarcely tinged with green. Yesterday, for instance, you observed only the radical leaves of some plants; to-day you pluck a flower.
—Henry David Thoreau

In science as in anything else, history and tradition can be powerful teachers. So here’s a vivid lesson: Today, flowers and trees are awakening much earlier than they did 150 years ago, and there’s proof in the journals of Henry David Thoreau.

Thoreau, best known for authoring “Walden,” was a prolific chronicler and admirer of nature. He kept detailed logs describing the first days when a plant or a tree flowered, which are now being used to document the changing face of Concord, Mass., as the earth grows warmer. Boston University botanist Richard Primack and National Park Service scientist Abe Miller-Rushing have spent a decade comparing Thoreau’s observations with their own.

“It was common at the time, particularly in Europe, for people to go around and write down when plants flowered, or when birds arrived, when frogs called,” said Miller-Rushing, Primack’s former grad student and now science coordinator for the Schoodic Education and Research Center at Maine’s Acadia National Park. “It was probably unusual to do it as diligently as Thoreau did, for 600-odd species of plants — that was not the norm.”

His journals offer an unparalleled phenological record — that is, a log of the timing of events, like a first flower or leaf growth. Looking back through Thoreau’s logs, as well as those of later botanists, Primack and Miller-Rushing found the first flowering date for 43 of the most common species has moved up by an average of 10 days.

Plants flower and grow leaves three our four days earlier for every 1 degree Celsius change in temperature, Primack said. As the temperature has changed by 2.5 C in Boston, that means plants are now flowering and leafing out one to two weeks earlier than they did in the past, depending on the species, he said. Those changes are related to sometimes drastic shifts in plant abundance — take for example the purple loosestrife, seen here. 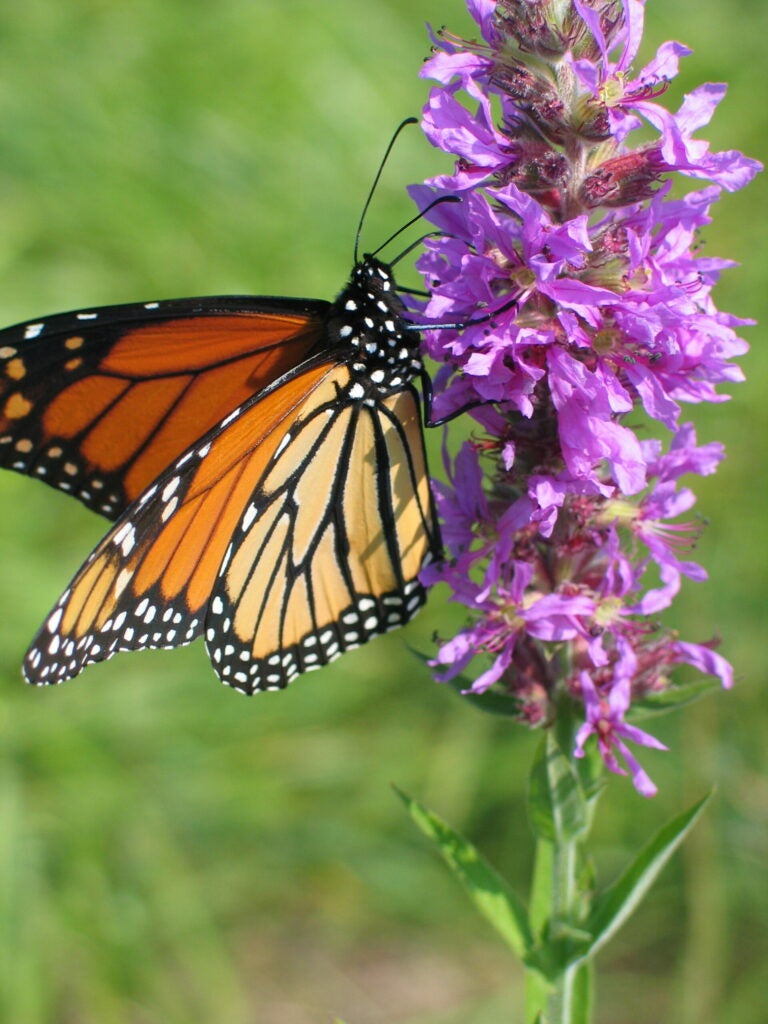 Purple loosestrife is an invasive species in Concord, and it leafs out earlier in warm years, Primack said. Its expeditious blooming helps it beat native species for the most pollinators, and it is increasingly crowding them out. In other locations, temperature changes are drying wetlands, harming some native species and helping invaders.

“In Thoreau’s time, there were relatively few non-native, invasive species in Concord. But in the last 150 years, one of the most striking phenomena is the decline of large numbers of native wildflower species. Many species which used to be common in Concord, like the Canada lily, are very rare, and some species that weren’t present 150 years ago are extremely common,” Primack said.

Many plants’ growing seasons are also getting longer, Miller-Rushing said. This may have major impacts for pollinating insects, many of which have evolved to match the distinct flowering times of different species. These impacts are just beginning to be studied.

Miller-Rushing believes Thoreau’s records can make climate change real, in a way computer models or temperature predictions never could. “It’s one thing to say it is 3 degrees warmer now than it was however many years ago,” he said, “but it’s another thing to say that this plant, say blueberries, are flowering three weeks earlier than they used to.”

Thoreau himself probably said it best: “The question is not what you look at, but what you see.” 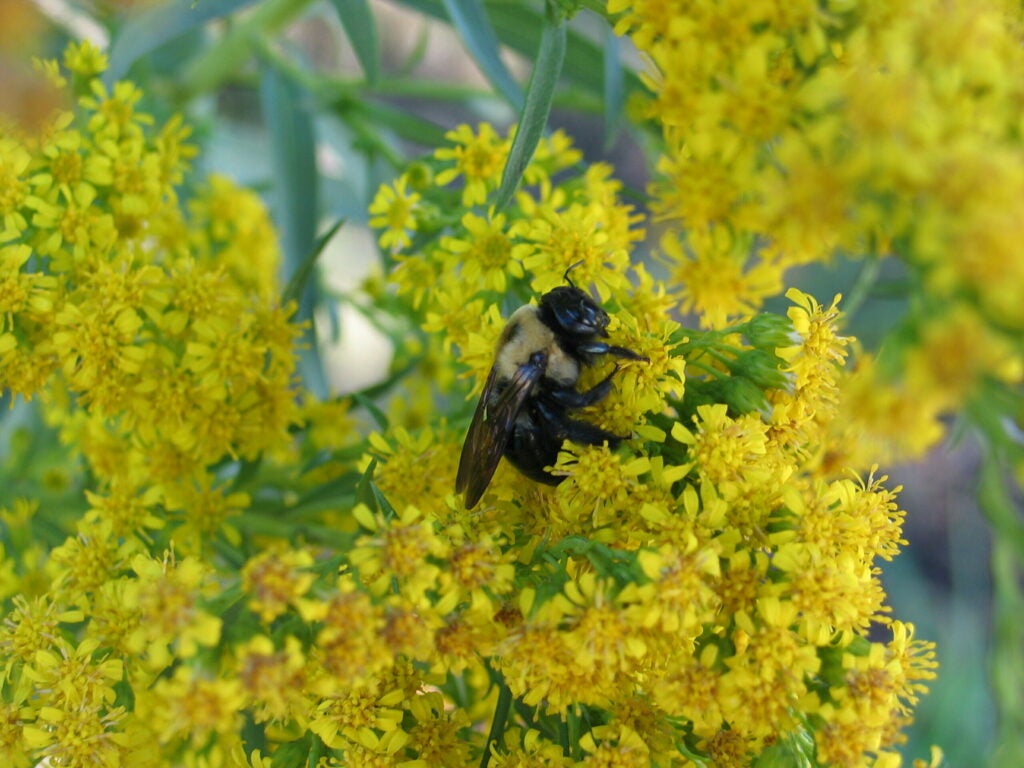 What Thoreau Said: Smilax glauca in blossom, running over the shrubbery. Honlcenya peploides, sea sandwort, just out of bloom on beach. The thick-leaved and densetufted, upright plant Salsola Kali, saltwort, prickly and glaucous, ill bloom. Beach pea (hathyrus maritimus) going out of bloom … Seaside goldenrod (Solidago sempervirens) not nearly yet. —July 7, 1855 Thoreau described these plants during a vacation to Cape Cod for the July 4 holiday in 1855. He also wrote down that fishermen in Provincetown were selling fresh lobsters for two cents apiece! Current Status: Still abundant, but flowering times are shifting. Primack and Miller-Rushing noticed that climate change affects different goldenrod species in different ways a€”Â some flower earlier, and some have no change.

What Thoreau Said: Am struck by the beauty of the yellow birches, now fairly begun to be in bloom, at Yellow Birch, or Botrychium, Swamp. It is perhaps the handsomest tree or shrub yet in bloom (apparently opened yesterday), of similar character to the alders and poplars, but larger and of higher color. — May 5, 1859 You see a great tree all hung with long yellow or golden tassels at the end of its slender, drooping spray, in clusters at intervals of a few inches or a foot. These are all dangling and incessantly waving [in] the wind, a€” a great display of lively blossoms. Current Status: Birch trees are flowering an average 5 to 10 days earlier now than when Thoreau noticed them, Primack and Miller-Rushing found. 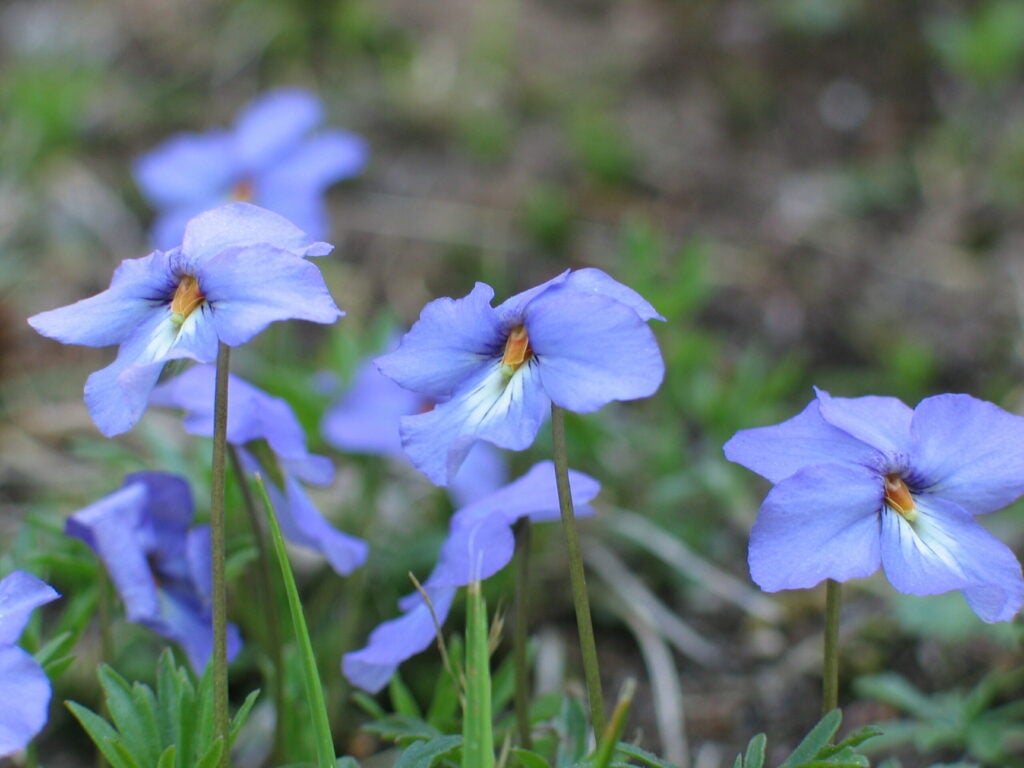 What Thoreau Said:
This bed of herd’s grass and wild oats was spread Â Last year with nicer skill than monarchs use. A clover tuft is pillow for my head, Â And violets quite overtop my shoes. aÂ aThe Summer Raina Current Status: Violets like this lotus corniculatus, captured at Sleepy Hollow Cemetery, are not adjusting their flowering times in response to climate change. They are much less abundant in Concord, Mass., than when Thoreau wrote about them 150 years ago. 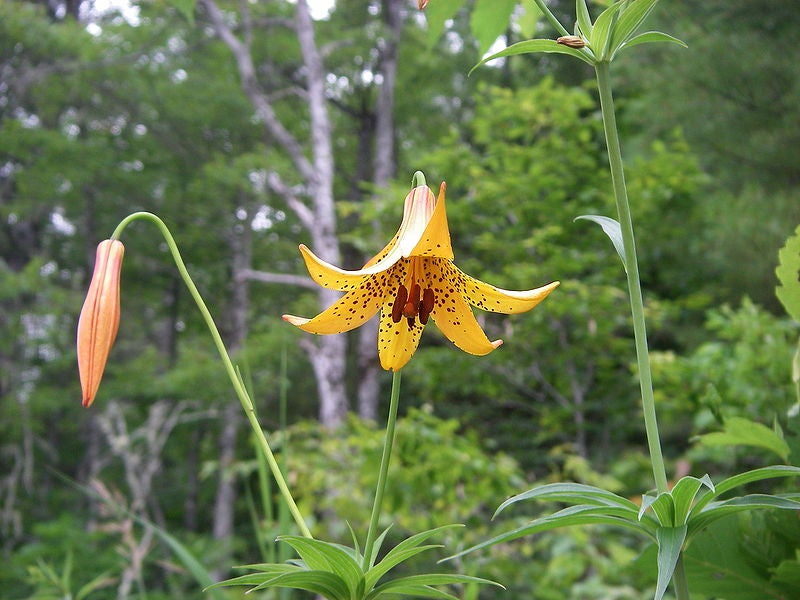 What Thoreau Said: To Hill and meadow. Plucked a Lilium Canadense at three-ribbed goldenrod wall, six and eight twelfths feet high, with a pyramid of seed-vessels fourteen inches long by nine wide, the first an irregular or diagonal whorl of six, surmounted by a whorl of three. The upper two whorls of leaves are diagonal or scattered. It agrees with Gray’s L. Canadense except in size, also with G.’s superbum except that the leaves of my specimen are rough on the edges and veins beneath (but I have not the flowers !). — Aug. 25, 1857 Current Status: Major decline. This flower used to be very common throughout Concord and is now extremely rare, according to Primack. From 2003 to 2006, Primack and Miler-Rushing found just one plant. 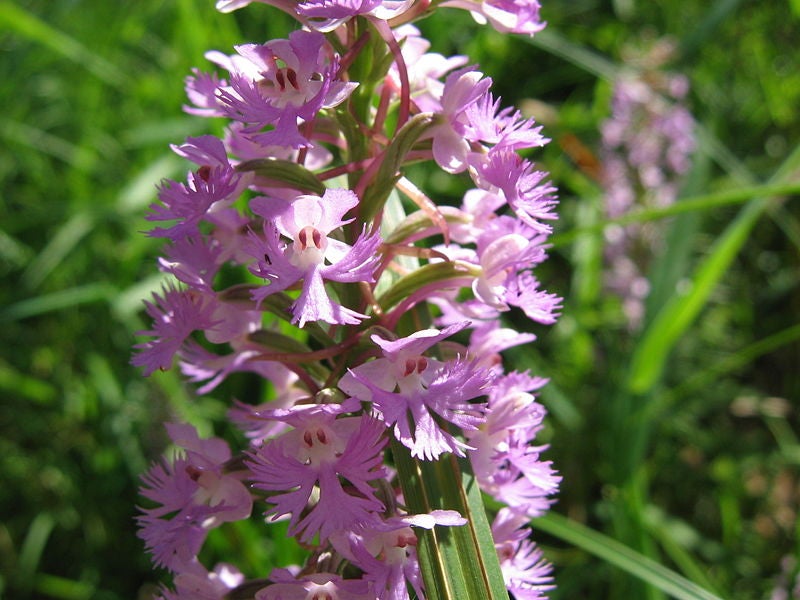 What Thoreau Said: In every meadow you see far and near the lumbering hay-cart with its mountainous load and the rakers and mowers in white shirts. The bittern hardly knows where to lay its eggs. If the meadows were untouched, I should no doubt see many more of the rare white and the beautiful purple orchis [orchids] there, as I now see a few along the shaded brooks and meadow’s edge. Current Status: The purple-fringed orchid, Platanthera psycodes, is now extremely rare in Concord. 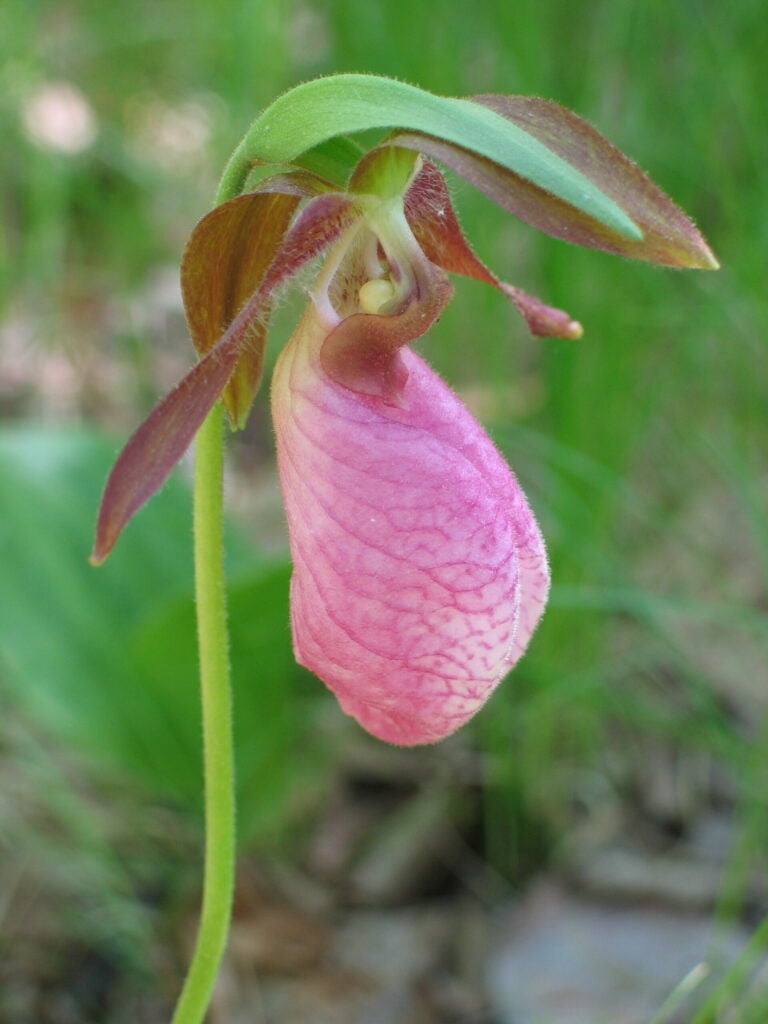 What Thoreau Said: aWhen the lady’s slipper and the wild pink have come out in sunny places on the hillsides, then the summer is begun according to the clock of the seasons.a — June 1, 1850 Current Status:: Pink lady’s slipper, like all orchids, are in moderate to major decline in modern-day Concord.
Climate Change
botany
feature
flowers
history
plants