Their calls act as "names," which demonstrate their spot in the social hierarchy. 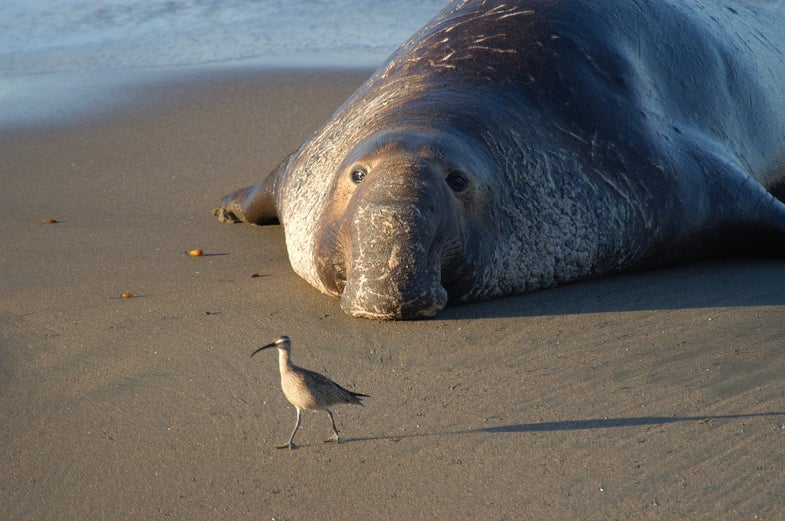 It’s been a while, but you could never forget that voice. It’s your high-school nemesis—the person you competed with when hormones were at their peak. You can’t see them in the crowded room, but just the pitch of their voice and the cadence of their speech is enough to make you want to turn and flee, sight unseen, just trying to avoid a repeat of the not-so-good-times. Elephant seals feel your pain.

A recent study demonstrates that male elephant seals have their own vocal “name” that they use and recognize during the breeding season that can be distinguished by rhythm and pitch. It signals their identity to anyone in earshot—like a call sign on the radio, or a baseball player’s walk-up music.

Researchers from Université de Lyon/Saint-Etienne, the University of California, Santa Cruz, and the Université Paris-Sud have listened in on these elephant seals calls for almost 20 years—watching and monitoring the behavior of elephant seals at Año Nuevo, a breeding site 30 miles north of the university. Caroline Casey, a PhD student at the University of California, Santa Cruz and co-author of the current study, joined the long-term project in 2009.

“More or less, male elephant seals have their own name, that they use and recognize during the breeding season,” says Casey. “They can remember these names, and it’s really important for them because it helps them avoid fighting with one another. If they’ve already interacted with each other before, they can just call and they remember the outcome of those previous interactions, and will decide to either attack or retreat.”

In elephant seal society, there are “alphas,” or males that get to control groups of up to 100 females at one time during breeding season. Other males are known as “betas.” Alphas exclude betas from breeding activities by physically attacking them. If a beta hears an alpha call, they will run away to avoid a fight.

Through careful observation of these seals during breeding season, Casey and her team were able to capture the importance of rhythm in these calls. They recorded alpha male calls, then distorted their rhythm and played the result back to beta males. The betas only ran away if the distortion was small enough to be within the individual variation of the alpha’s roar. They stayed put when confronted with a call that had undergone more extreme change, demonstrating the importance of the rhythm and pitch in determining if a call was actually that of a foe.

“We hypothesized that maybe rhythm and pitch would be the two things that sort of helps convey individual identity,” she said. “I think that is neat because now we know what features of the call are really important.”

This means a lot for more than just elephant seals. Casey says that although people used to think that rhythm and the perception of music was really only a human quality, through research done by both her colleagues and demonstrated through animals like cockatoos, any animal that has rhythmic components through its communication system are likely perceiving rhythm.

“I think that if other people were to adopt the approach that we adopted: we got to know each of these male seals, we recorded them, we observed their behavior and set up an experiment that I think was very careful. It allowed us to really demonstrate that they perceived rhythm,” she says. “I hope it motivates other people who work on animals that have calls that have rhythmic quality, to ask similar types of questions if they can.”

Casey says that the group is planning on continuing research to how young males develop these calls in his lifetime, what influences might be important, and if are they learning these calls or if there is a genetic component.

“We are really shifting our focus to young males, and trying to tell their stories about the calls that they have and also what it takes to become an alpha,” she says.