Plants have a trick that drives very hungry caterpillars to cannibalism 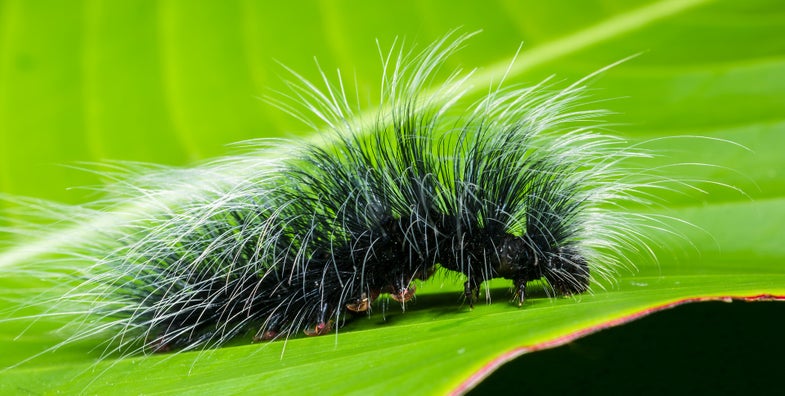 Caterpillars emerge from their eggs very hungry, and start munching away on green leaves, apples, plums, tomatoes, and…OH GOD. WHY, ERIC, WHY? YOU JUST ATE CARL!

Yes, unlike beloved children’s stories may lead us to believe, nature is a cruel, hard world—painted not in watercolors, but in blood. A study published today in Nature Ecology and Evolution found that chemicals released by plants as they are eaten can help push caterpillars to cannibalism.

The authors looked at tomato plants, which—like many other plants—release the chemical methyl jasmonate when stressed or damaged. Getting gnawed on by a caterpillar is stressful, so when the caterpillars start biting, the chemical flare goes up. Other, nearby plants sense the flare and start producing their own methyl jasmonate, building a chemical camouflage around their leaves and stems.

Once all the food sources taste terrible, caterpillars turn to the next available meal: each other. The researchers found that plants with the time to build up a strong defense can make their leaves so unappetizing that caterpillars will start eating each other to get their fill, leaving the plant alone.

“It often starts with one caterpillar biting another one in the rear, which then oozes. And it goes downhill from there,” study author John Orrock said in a statement. “At the end of the day, somebody gets eaten.”

In this study, Orrock and colleagues only looked at how caterpillars reacted on individual plants. So it’s possible that if the bugs had the freedom to move along to more appetizing plants, they wouldn’t be so quick to turn on their buddies. The researchers plan to keep studying how caterpillars act in a setting with more than one plant, and also plan to look into how insect viruses are transferred during their more carnivorous period.

If viruses that harm caterpillars are transferred more easily by cannibalism, then that could be a win-win for the plants: not only are their leaves protected from pests, but now those predators are spreading disease amongst themselves, reducing the herbivore population still further. Understanding how that works could help farmers and gardeners design better methods of pest management.

But how rare is cannibalism anyways? Among bugs and insects, not very. Plenty of larvae eat the eggs of their unhatched brethren. Then there’s sexual cannibalism, made famous by praying mantises but also practiced by other insects, including cockroaches. Higher temperatures are also making some damsel flies turn to cannibalism.

Cannibalism can even explain certain bug behaviors. An multi-national study in 2008 found that locusts swarmed primarily because they were worried that the locusts behind them were trying to literally take a bite out of their behinds.

A review study in 2010 found that many typically herbivorous insects—like caterpillars—could be swayed to carnivorous cannibalism if there wasn’t enough food to feed all the hungry mouths, if the available food wasn’t great, or, in a few cases, if they were simply genetically predisposed to cannibalism.

Interestingly enough, cannibalism can serve some important functions among these herbivores. Eating each other literally takes the competition out of the food chain, and keeps the surviving population strong in a time when food might be scarce. So don’t be too quick to judge these fuzzy lil cannibals—it’s a bug eat bug world out there.