Most males miss out. 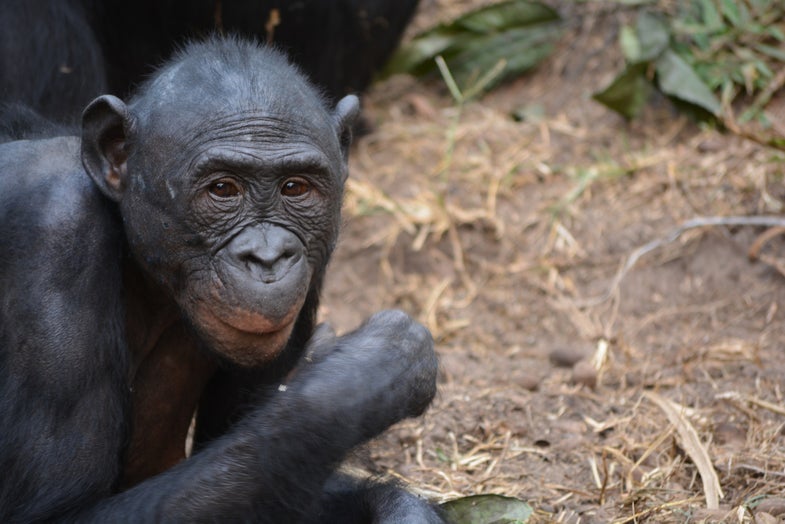 Bonobos get it on every which way. Really, truly. Every. Which. Way. But there is a line that lady bonobos have drawn in the sand, and it turns out that line is “unattractive males.”

You might know bonobos as the more peaceful cousins of chimpanzees. If you didn’t already know them, welcome to the world of bonobos—there’s a lot of sex. Which isn’t to say that they’re constantly having sex, just that they’re a very free-spirited group of apes. Unlike humans, they don’t seem to have stigmas against sexual acts, so they pretty much do it any way they want. And they want it a lot of ways.

Until recently, primate biologists thought that meant that female bonobos must mate with a wide variety of males. Their more aggressive chimp relatives have a hierarchy of males, and only the top of the pyramid gets to mate with the group’s females. But bonobos spread the love, so it would make sense for them to have more mate pairings.

Not so. Three biologists spent years tracking matings in the Democratic Republic of the Congo and found that female bonobos pretty much all go for the same few males. They published their findings in the journal Current Biology on Monday.

The bonobos turned out to be even more selective than chimp groups, who have a notoriously strict hierarchy. That might seem a little backwards, but it actually makes a lot of sense. In the chimp world, it’s perfectly acceptable to coerce a female into having sex, and “coerce” is a pretty generous word. If you’re okay with that method of persuasion, it follows that males who are lower on the ape totem pole will still be able to mate, if not quite as often as their stronger and more attractive adversaries. But bonobos are much more peaceful, so the lower-ranked fellas don’t even get a chance. It’s lady’s choice, and when she inevitably chooses your more desirable buddy—well, too bad.

This works out perfectly for female bonobos. Like humans, they only have to mate with partners they dig, which is definitely better than the whole violent coercion thing chimps have going on. Of course, if you’re a bonobo lady your sexual freedom means being pretty much constantly pregnant and raising all your babies as a single mom.

And female sexual choice doesn’t always work out in the animal kingdom—for either sex. Just look at ducks. Go on, look at ’em. Lady ducks have corkscrew-shaped vaginas, and it’s not because they like really kinky (sorry) sex. It’s because male ducks force themselves upon females so often that they’ve had to evolve physical defenses against intruding penises. See, male ducks have corkscrew-shaped penises—they just spiral in the opposite direction from duck vaginas. And oddly, this violent sexual arena is probably due to the evolutionary preservation of female choice. Having a defense against aggressive males means that the lady ducks still (mostly) get to pick their mates. They just have to put up with a lot of very unpleasant looking attempts from would-be suitors.

On the other hand (wing?), male birds get their beautiful plumage from female choice. Lady birds are usually pretty bland because they’re doing the choosing, so the men are forced to compete for female attention. The brighter or bigger the feathers, the more likely they are to be chosen.

Dominance is sexy to bonobos the way plumage is sexy to birds, so the dominant bonobos, well, dominate the sexual scene. And honestly, more power to them. They’re peaceful creatures who are totally chill about touching each other’s penises. Or vaginas! Any kind of touching, really. Shine on, you crazy bonobos.