Why NASA is running out of spacesuits

The agency is “years away” from building a replacement 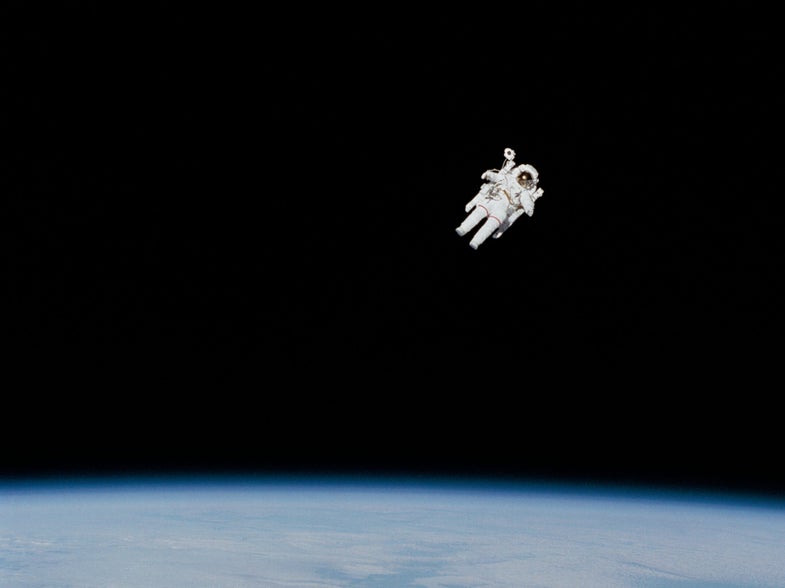 Today’s spacesuits are designed to work well while astronauts float around outside the International Space Station. But they’re not quite right for walking around on the moon or Mars—they’re too heavy and don’t provide enough flexibility in the hips and knees. That’s why NASA is investing in a next-generation spacesuit for exploring deep space.

However, the space agency may soon find itself up s*** creek without a pressure suit. A new report from the Office of Inspector General (OIG) says NASA is running out of its older spacesuits, known as Extravehicular Mobility Units (EMUs). Only 11 of the original 18 suits are left, and they may not be enough to last until the ISS gets decommissioned in 2024. According to agency officials, it would be “prohibitively expensive” to order more of these EMUs.

Of the seven missing spacesuits, four were lost in the Challenger and Columbia disasters, one was destroyed in the SpaceX explosion in June of 2015, one was lost during testing, and one was a prototype that was never meant to fly. But some of the 11 that are still in service also have issues. Two are being investigated or disassembled for issues with their water systems, two are currently designated for ground chamber use only. Two more are still undergoing certification.

Meanwhile, the new spacesuits are not getting done fast enough; the first iteration of the future suit won’t be ready until 2023, so if the schedule slips even just a little bit, there won’t be enough time to test the new components on the ISS.

NASA has spent 10 years and $200 million to create a new suit, but so far there’s not much to show for it. “Despite this investment,” the OIG report notes, “the Agency remains years away from having a flight-ready spacesuit capable of replacing the EMU or suitable for EVA use on future exploration missions.”

NASA needs a game plan. The report notes that while the Mercury, Apollo, and Space Shuttle suits were designed with specific missions in mind, NASA hasn’t identified where exactly future astronauts will be going, or what they’ll need to do. Will they go back to the moon? Stop over on one of Mars’ moons? Or head straight to the Martian surface? All of these options require different spacesuit designs, because each destination has different temperatures, radiation levels, pressures, and mobility requirements. As a result, the spacesuit development program has been more complicated than necessary.

To be fair, it’s difficult for NASA to develop detailed, long-term plans when new presidents can come in and scrap their plans at any time. And there’s still a lot of debate in the scientific community about what is the best strategy to reach Mars.

There’s not enough funding. This one’s a perennial problem, but NASA actually reduced funding for spacesuit development in favor of other items, like deep-space habitats, which Congress asked the agency to get working on.

They’re putting their eggs in too many baskets. Since 2007, NASA’s Human Exploration and Operations (HEO) Mission Directorate has invested in three different spacesuit development programs. It put a total of $135 million toward the Constellation Space Suit System (CSSS), $52 million toward the Advanced Space Suit Project, and $12 million to develop a flight suit for the Orion spacecraft.

In 2010, President Obama canceled the moon-bound Constellation program in favor of going to Mars. At the time, the Johnson Space Center recommended that HEO should cancel the Constellation spacesuit program. But for some reason, HEO continued to fund it, even though many of the CSSS program’s systems were redundant with and less advanced than those of the Advanced Space Suit Project. Between 2011 and January 2016, when the CSSS contract ended, NASA spent $81 million on it.

“We question the Agency’s decision to continue to fund the CSSS contract after Johnson leadership recommended its termination in early 2011,” says the report.

It’s possible that the 11 spacesuits that remain will be enough to sustain ISS astronauts until 2024 or beyond—that’s what the folks who run the ISS seem to think. The suits have already weathered several decades … what’s a few more?

But the EMUs were originally intended to come back to Earth for maintenance after every Space Shuttle mission. Now that the shuttle is retired, those return shipments have gotten less frequent—the suits on the ISS will stay up there for six years or 25 spacewalks, whichever comes first. The astronauts perform some spacesuit checks and maintenance on the ISS, but overall the suits are going for much longer in between tune-ups than they were designed for.

As for the new suits, the report says there is a “significant risk” that the first prototypes won’t be ready in time for testing on the ISS before it retires in 2024. That would mean NASA will either have to come up with a new plan to test them in space, or else just test them less rigorously.

NASA is hoping to extend the lifetime of the ISS to 2028, which would accommodate a slower testing schedule, but then the current spacesuit shortage would only become a bigger problem. So the space agency finds itself in a bit of a catch-22.

Popular Science reached out to NASA’s HEO office to see how they plan to handle this, but they have not responded as of the time of publishing. The OIG report makes a few recommendations, but they’re mostly just a wordy way of saying “figure it out.”