The Physics Of Non-Newtonian Goo Could Save Astronauts’ Lives 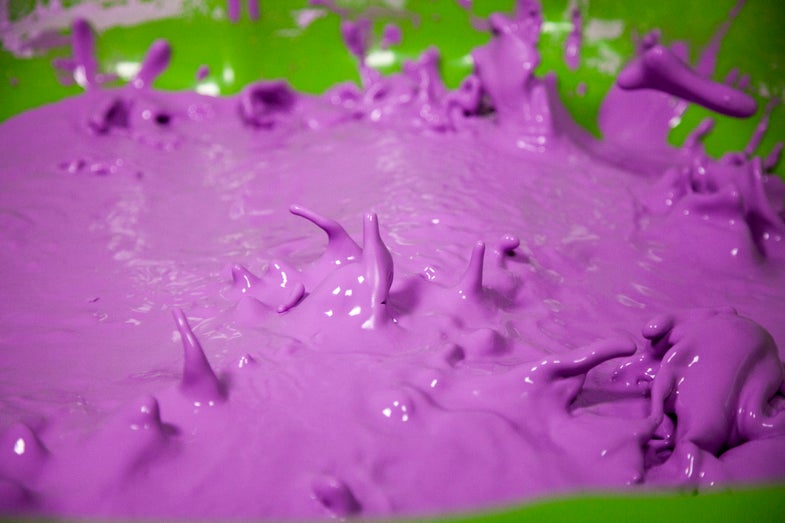 There’s an experiment you may have done in high school: When you mix cornstarch with water—a concoction colloquially called oobleck—and give it a stir, it acts like a liquid. But scrape it quickly or hit it hard, and it stiffens up into a solid. If you set the right pace, you can even run on top of a pool of the stuff. This phenomenon is called shear force thickening, and scientists have been trying to understand how it happens for decades.

Watch the difference in thickness between plain water and when it’s mixed with cornstarch here:

There are two main theories, and figuring out which is right could affect the way we make things like cement, body armor, concussion preventing helmets, and even spacesuits.

“The debate has been raging, and we’ve been wracking our brains to think of a method to conclusively go one way or the other,” says Itai Cohen, a physicist at Cornell University. He and his team recently ran a new experiment that seems to point to friction as the driving cause of shear thickening.

They decided to perform what is called a flow reversal experiment. They put a cone into a dish full of the fluid and measured the torque it takes to spin the cone. As shear thickening begins, it gets harder to spin the cone. Then they suddenly reverse the spin direction. The idea is that if contact force is the cause of shear thickening, then the moment the spinning reverses, the particles will pop free of each other, and there will be an immediate drop in the magnitude of torque. If hydrodynamic clusters were the main cause of shear thickening, the torque wouldn’t drop.

The problem is that the force has to be measured immediately, and there wasn’t a machine that could make that measurement fast enough to see the effect. So Cohen’s team partnered with Gareth McKinley at MIT, who altered the machine to get the data more quickly. When they tested simple solutions they had made, they saw that characteristic drop in force after they reversed the flow. Further modeling suggested that friction might be the contact force at play.

“We are giddy with excitement,” Cohen says. His results were published today in the journal, Physical Review Letters.

“It’s an excellent piece of work,” says Jeffrey Morris, a chemical engineer who studies fluid mechanics at the City College of New York. But he does point out that Cohen’s results might not be generalizable to every shear thickening fluid. “I think they’ve shown that friction is the right explanation for their system, but other systems may need to be tested on a case by case basis,” he says.

Norman Wagner, a chemical engineer at the University of Delaware, says that research into frictional interactions like this is important, but notes that he isn’t completely convinced as Cohen’s team didn’t measure friction directly (they inferred it was friction from their modeling however they didn’t find the exact measurement of the friction between the particles). He also says that there’s a lot of data in the field already that strongly indicates hydrodynamic clusters as the cause for shear thickening.

However, the researchers all agree that once the exact cause of shear thickening is nailed down, the applications that could follow are vast. “Once you know the mechanism that’s causing the phenomenon, you can tailor particle properties to change it,” says Morris. People could design mixtures that either stiffen up or stay fluid, depending on what they want to do with them, he says.

For example, you want to be able to easily spray or roll paint on your wall without it clumping up. Researchers had to design paint so that it did not shear thicken. The same goes for cement, which needs to be poured at high speeds without seizing. On the other hand, shear thickening fluids can make body armor that hardens on impact, spreading the force across a larger part of the body, says Wagner. That protects soldiers, police, and EMTs from things like stab wounds or fragments flying through the air during an explosion.

Watch this cornstarch and water mixture harden against a hammer strike, then return to a fluid:

“And if we can protect soldiers,” he says, “why not astronauts?” Wagner and his team are working on a NASA funded project to improve space suits so that micrometeorites or other debris can’t puncture them. They have also bent their technology to make padding for helmets and shin guards that would do a better job protecting athletes from harmful impacts. They are even making puncture resistant gloves that would give healthcare workers the same dexterity as current ones but with extra protection against accidental needle sticks.

“It’s a very exciting area,” says Wagner. He’s very interested in designing materials that automatically protect someone, without robotics or power. It’s just the innate physics of the material, he says. “We can harness nature to work to our advantage to make it respond in a way that protects us.”