In this modern economy, apparently nothing is sacred — not even the space shuttle is spared the indignity of training... 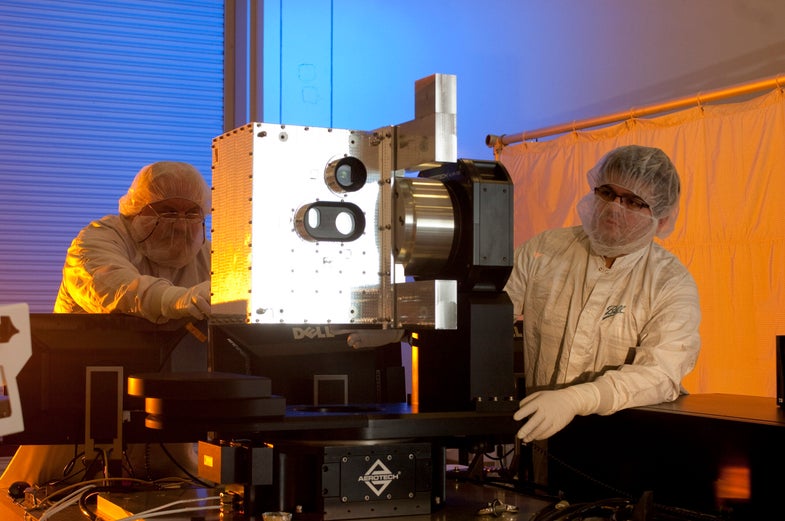 In this modern economy, apparently nothing is sacred — not even the space shuttle is spared the indignity of training its younger replacement. During what is planned to be the last shuttle flight ever, astronauts onboard space shuttle Endeavour next February will test a new docking system designed for the Orion spacecraft. The system provides real-time 3-D images to the crew and is more streamlined and more accurate than the shuttle’s docking sensors.

Last week, the STS-134 crew got a preview of the technology from Ball Aerospace, whose engineers designed the system with workers from Lockheed Martin, NASA’s primary contractor on the Orion project. The new docking system involves an eye-safe flash Lidar Vision Navigation System and a high-definition docking camera. The system’s resolution is 16 times that of the shuttle’s, and it provides data from as far away as three miles, triple the shuttle’s ability.

“There’s nothing like collecting data in this environment, compared to the testing we can do on the ground,” she said.

On the 11th day of the last shuttle mission, astronauts will make a penultimate departure from the International Space Station and move about 3.5 miles away. As the shuttle slowly returns to the ISS, the Orion docking system will switch on. The shuttle will approach the station the way Orion would, and engineers at Ball, Lockheed and NASA will gather streams of data to improve their system’s algorithms.

Astronauts will really be using the shuttle’s existing docking system, but astronaut Andrew Feustel (currently co-starring in the Hubble IMAX movie) will take the new one for a test drive.

The tests will improve spacecraft docking capability regardless of what Congress and the White House decide to do with the Constellation program. It could be used by pilots or in unmanned craft, says Lisa Hardaway, Ball’s chief engineer for the Orion project. If the Obama administration decides to send a vehicle to an asteroid, for instance, a system like this could simplify the rendezvous.

“The beauty of our instruments is that they can be used on any vehicle for any application. For any incarnation that Orion ends up in, our vehicle is still applicable,” Hardaway says.

Befitting the space program’s legacy, the system might also be useful for Earth applications — its capability to determine shapes, intensity, and distance could improve terrain mapping, deforestation monitoring and hazard-avoidance systems in transportation.

The space shuttle uses different sensors as it approaches the ISS. At far distances, astronauts track their target with radar. As they approach the station, they use a trajectory control system and a laser.

The new system integrates everything, Domber says. The Lidar system sends out a laser pulse, which is reflected to a sensor and translated into computer data. The astronauts will know exactly where their spacecraft is relative to its docking target, and the high-def camera shows them a real-time view.

Lidar systems can be dangerous, especially for astronauts peering out the space station’s cupola to catch a view of the action. Engineers had to build a small but powerful Lidar laser that wouldn’t hurt astronauts’ eyes, Domber says: “We have done eye-safe lasers that require much more power, and are larger, and we have done not-eye-safe lasers in a small package. We needed to combine the two to make it safe.”

The laser fits in the palm of your hand, and the whole package is about the size of a bread box. It is the latest in a suite of new technologies meant to further NASA’s goal — if not Obama’s — to see Orion fly in 2013.

And the latest to help shepherd the shuttle into the annals of history. Learn more about it in this video.