When we finally go to Mars, we might end up living in giant metal cans 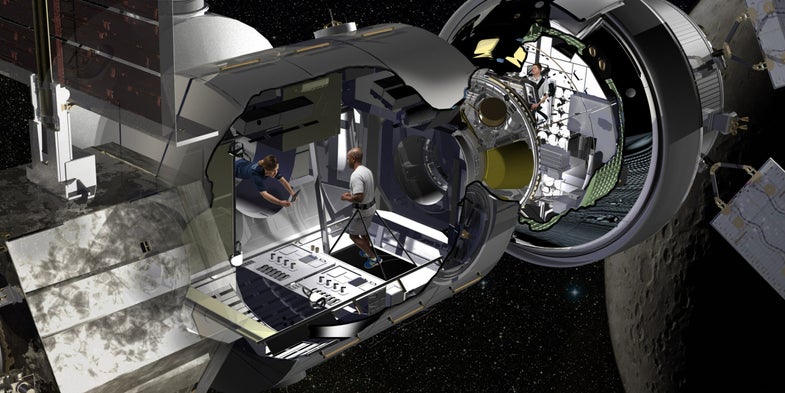 Lockheed Martin artist rendering of the NextSTEP habitat docked with Orion in cislunar orbit as part of a concept for the Deep Space Gateway. Orion will serve as the habitats command deck in early missions, providing critical communications, life support and navigation to guide long-duration missions. (PRNewsfoto/Lockheed Martin). Hand-out
SHARE

If humans are ever really going to make it to Mars, we’re going to need a bigger boat.

Today’s spaceships are built for short hauls to and from the International Space Station, a mere six or so hours away. These ships, like the Russian Soyuz, SpaceX’s Dragon, NASA’s upcoming Orion capsule, are small, cramped, and they don’t have bathrooms or sleeping quarters. These space canoes simple won’t do for nine-month ride to Mars. That’s why NASA has commissioned six companies to research designs larger deep space habitats that will put the ship into spaceship.

Lockheed Martin is one of the companies that’s developing a concept for NASA, and on Thursday it announced plans to build a life-size prototype of its Deep Space Gateway at the Kennedy Space Center in Florida.

This prototype won’t fly into space, but it will help the company to refine its design. “Form, fit and function are key,” Bill Pratt, Lockheed’s habitat program manager told PopSci via email, “so we will be exploring the critical elements needed in this section of a larger deep space gateway to ensure functionality for the astronauts.”

To build it, the company will refurbish an old cargo container named Donatello, which was used to carry supplies to the ISS in the shuttle era. (The container’s siblings, made by the Italian Space Agency, are Leonardo, Raffaello.) It will take about 18 months to refurbish the roughly 22-foot-long, 15-foot-diameter metal can.

“The main objective is to ensure astronauts can utilize the space efficiently in combination with other elements of a full architecture,” says Pratt, although he admits there will be some limitations, since the astronauts won’t be floating, like in space.

Lockheed says it will experiment with virtual and augmented reality (AR) to help speed up design and construction, and reduce costs, by identifying problem areas before they happen in real life.

“For example,” says Pratt, “we are exploring how we can use AR to integrate exercise equipment for the astronauts—before allocating physical space for it in the habitat. We are also looking at modeling docking ports for other elements of the Deep Space Gateway, rather than cutting holes in the actual Donatello cargo container.”

They’re trying out a variety of platforms for the “mixed reality” portion of the project, including Microsoft’s Hololens and Meta.

There aren’t many other details about what the Gateway might look like, but it will of course need life support equipment, protection from deep space radiation, and, for long-term missions, private spaces and exercise areas for astronauts—similar to the International Space Station.

“Because the Deep Space Gateway would be uninhabited for several months at a time, it has to be rugged, reliable and have the robotic capabilities to operate autonomously,” Pratt said in a statement. “Essentially it is a robotic spacecraft that is well-suited for humans when Orion is present.”

After Lockheed runs its tests, the company plans to hand over its prototype so that NASA can do its own analyses.

In addition to the habitat prototype, the company is planning to build an avionics laboratory to demonstrate Deep Space Gateway’s ability to interface with NASA’s Orion capsule. The module may also help astronauts train for scenarios that might arise in space, should NASA decide to send Lockheed’s design into space.

Whichever habitat design NASA funds will first set up camp in orbit around the moon in the 2020s, as a testing ground for long-duration missions to Mars in the 2030s.