Check Out The Document That Created NASA

The National Aeronautics and Space Act of 1958 started it all. Happy birfday, NASA! 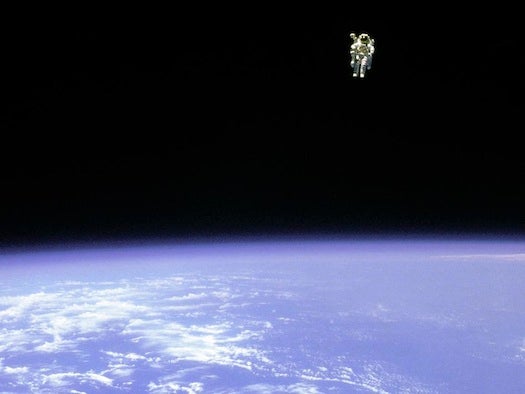 The National Aeronautics and Space Act of 1958

This document is the National Aeronautics and Space Act of 1958, which created NASA. It was signed into law by President Eisenhower 55 years ago yesterday. The document outlines NASA’s policies, guidelines, objectives, and more. Their objectives, as described in 1958, are as follows:

(1) The expansion of human knowledge of the Earth and of phenomena in the atmosphere and space.

(2) The improvement of the usefulness, performance, speed, safety, and efficiency of aeronautical and space vehicles.

(3) The development and operation of vehicles capable of carrying instruments, equipment, supplies, and living organisms through space.

(4) The establishment of long-range studies of the potential benefits to be gained from, the opportunities for, and the problems involved in the utilization of aeronautical and space activities for peaceful and scientific purposes.

(5) The preservation of the role of the United States as a leader in aeronautical and space science and technology and in the application thereof to the conduct of peaceful activities within and outside the atmosphere.

(6) The making available to agencies directly concerned with national defense of discoveries that have military value or significance, and the furnishing by such agencies, to the civilian agency established to direct and control nonmilitary aeronautical and space activities, of information as to discoveries which have value or significance to that agency.

(7) Cooperation by the United States with other nations and groups of nations in work done pursuant to this chapter and in the peaceful application of the results thereof.

(9) The preservation of the United States preeminent position in aeronautics and space through research and technology development related to associated manufacturing processes.

How do you think they did? Read the full text of the document here, and check out what they’ve been up to of late.