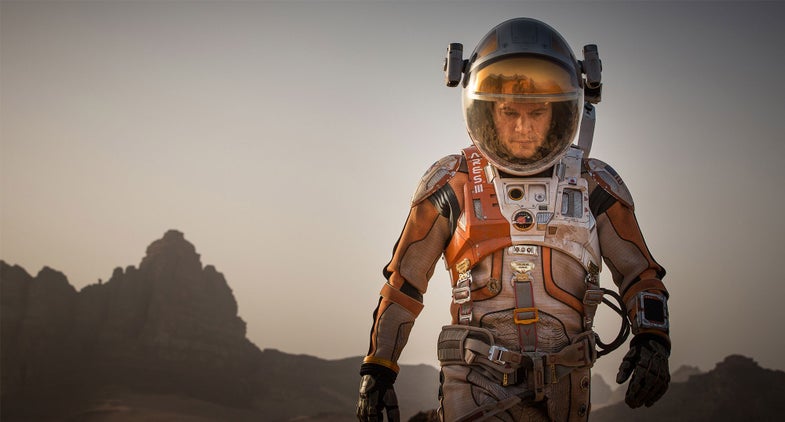 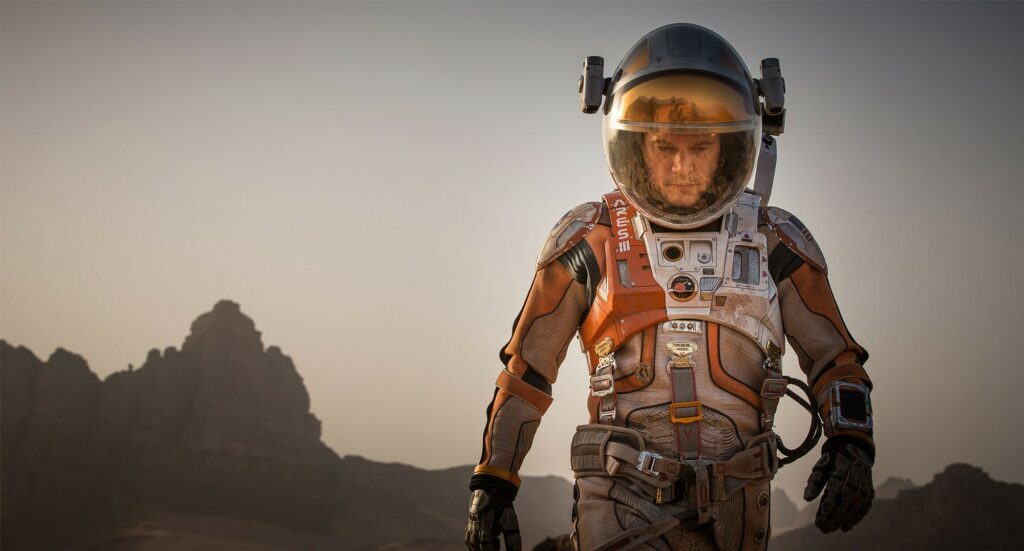 Matt Damon as Mark Watney, an astronaut who becomes stranded on Mars.

The day Ridley Scott called NASA was a great day for NASA. Scott, or Sir Ridley, or the dude who has directed several of the greatest sci-fi movies of all time, plus Thelma and Louise, was in the early stages of his newest movie, The Martian, based on the mega-popular novel by Andy Weir.

The Martian is a deadly simple tale of an astronaut named Mark Watney (played by Matt Damon) trying to survive and eventually escape from Mars after being stranded there. But the most important fact about The Martian is not all of the extreme close ups on Matt Damon’s handsome astronaut mug (there are many!). It’s that The Martian is extremely recent science fiction. Its set in a version of the future that is not distant or fantastic, but familiar and possible. And the premise of the story is based on just the type of mission that NASA is planning. For this reason, above all others, NASA was over the moon about The Martian. 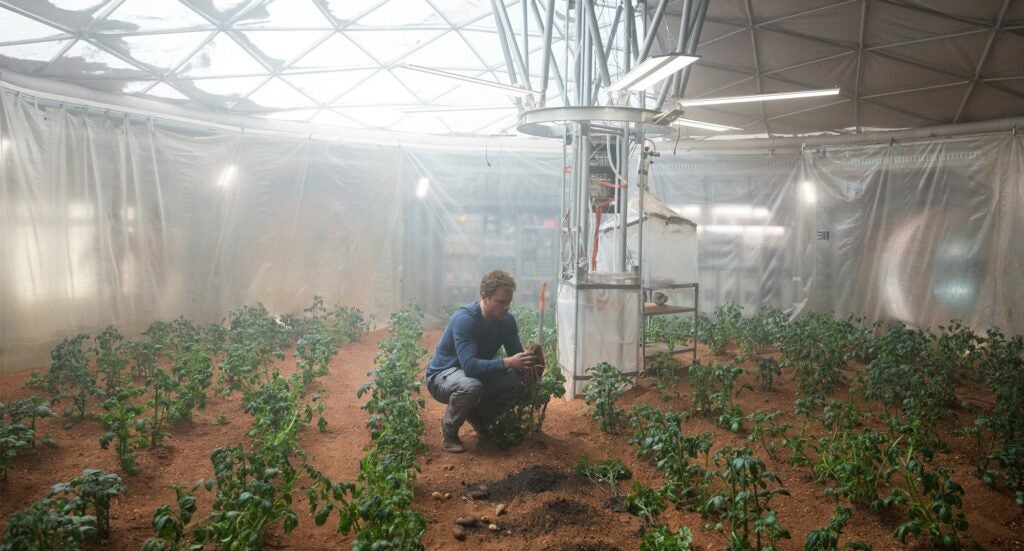 Matt Damon’s character must find a way to survive on Mars–a problem that becomes seemingly insurmountable as help turns out to be literally years away and he must figure out how to feed himself plus solve a bunch of lesser yet still colossally important problems, or he dies.

As the book marched up so many bestseller lists, the agency invited Weir, who researched his novel almost entirely online, to its Johnson Space Center and Jet Propulsion Laboratory (JPL). Scott, unlike Weir at the time he was writing the book, has significant power, influence, and fame. When he started working on the film, he called NASA directly and the organization hopped to, not just because it was Ridley Scott, but because he was making a movie out of the book that made NASA look awesome, and a mission to Mars real. Schedules were cleared. Meetings booked. And Jim Green, NASA’s director of planetary sciences, answered Scott and his crew’s questions about rockets and habitats and rovers and then invited them all out to see some of the habitats and the prototypes of real stuff that NASA was building for exactly what Scott was attempting to depict.

It is fitting, then, that the men who walked onto the stage before Ridley Scott or Matt Damon, before they screened the first 49 minutes of the film (it hits theaters October 2nd) are Charles Elachi, director of JPL, and Jim Green.

Elachi made some cracks about how the JPL engineers in the film were dressed so sloppily—”We at JPL pay more attention to the intellect, and not the fashion,” he said; and also that the film presents “a fairly reasonable representation of what is to come.” Green walked through the plan to get humans to Mars, and back, in the next twenty years. The Mars 2020 rover has an experiment onboard to collect carbon dioxide and turn it into oxygen and store it. “We can use it to breath, but also for rocket fuel,” he said. Any trip NASA leads will be a return trip.

We watched a sort of preview, complete with plenty of CGI and hashtags (#journeytomars) of NASA and JPL’s Mars missions, past and future, ending of course with not a rover scooping up dirt samples, but a man. Then the work-in-progress movie screened and the first scene of it perfectly mirrored the NASA advertisement. I wondered which had come first but quickly lost that line of thought because, man, there are a lot of stars in this movie despite it being pretty much only about Matt Damon/Mark Watney. Kristen Wiig plays a NASA PR flack, which is great casting. Jessica Chastain plays another astronaut, the mission commander, and it is also great casting. Jeff Daniels plays the head of NASA, which is obvious casting. Chiwetel Ejiofor plays, with extreme confidence, the token super brilliant black dude in a space movie. The best part of the film is obviously Matt Damon, who is not just extremely good at being an astronaut, but is funny, and it is nice to see him get to do that, because he is good at that, too. It’s a funny movie, in parts. You will laugh out loud, probably. Also you will grimace, early on, when Mark Watney surgically removes a metal rod from his abdomen.

After the screening, Sir Ridley Scott and Matt Damon as well as Jim Green and Drew Feustel, a real life astronaut—gamely dressed in his blue NASA jumpsuit—came onto the stage to take questions. There were a lot of embarrassing questions directed at Matt Damon, about his prowess and understanding of the astronaut life and mind after so much experience in a space suit. He wisely shrugged off these questions or deflected them toward Feustel, the real astronaut. Someone asked if they—Scott and Damon—had thought about the portrayal of gravity on Mars, where there is 40 percent less of it. They began to explain but then Damon asked, “Wait, how much do you know?” and the man from the audience said, “Well, I’m an astrophysicist,” and there was a fantastic “oh shit” pause as Damon and Scott sort of inhaled and then launched into their reasoning, which was, more or less, that movie magic hasn’t figured out a good way to account for 40 percent gravity, which is cinematically not nearly as satisfying as zero gravity, so they ignored it. 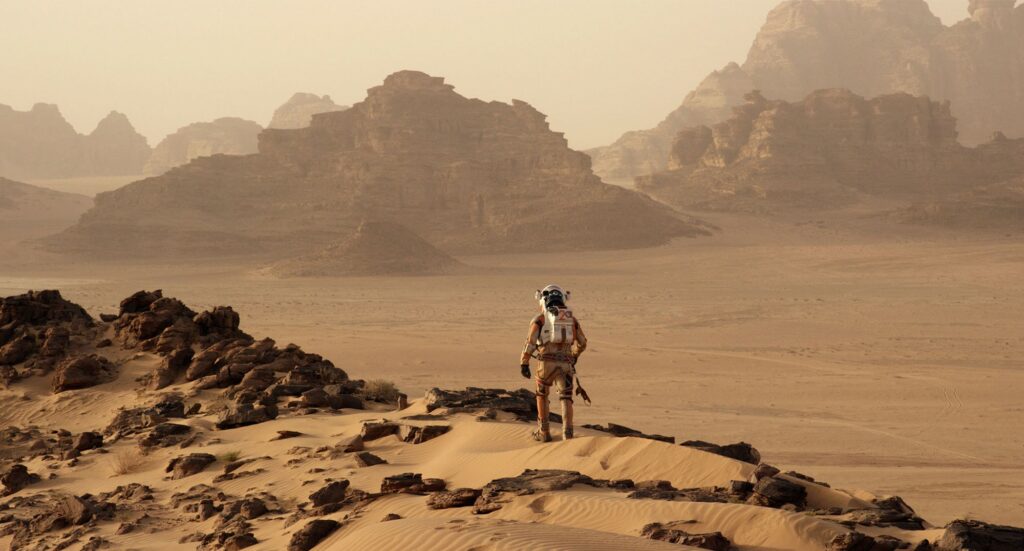 Ridley Scott, to his endless credit, name checked The Right Stuff, one of the better realistic space movies of all time, several times. He was especially interested, he said, in how The Right Stuff explored pilots’ and astronauts’ fear and closeness to death, and how they dealt with both, often through humor or extreme, almost fake seeming confidence. He wanted to explore something similar with this film. It was smart, and I liked him even more for saying it, and forgot for a moment that he had made Exodus: Gods and Kings and A Good Year.

Then, the movie star and director left the stage and we all got into shuttles and went to JPL campus, for a tour. There we saw the Mars Yard. We saw a Low Density Supersonic Decelerator, which is a fancy way of saying a parachute for future Mars landings. We saw an exact replica of the Curiosity Rover currently being tested to modify, perhaps, the real Curiosity’s drilling technique. After this, we were given lunch and the opportunity for some highly staged and formal one-on-one interviews with Andy Weir and Jim Green. 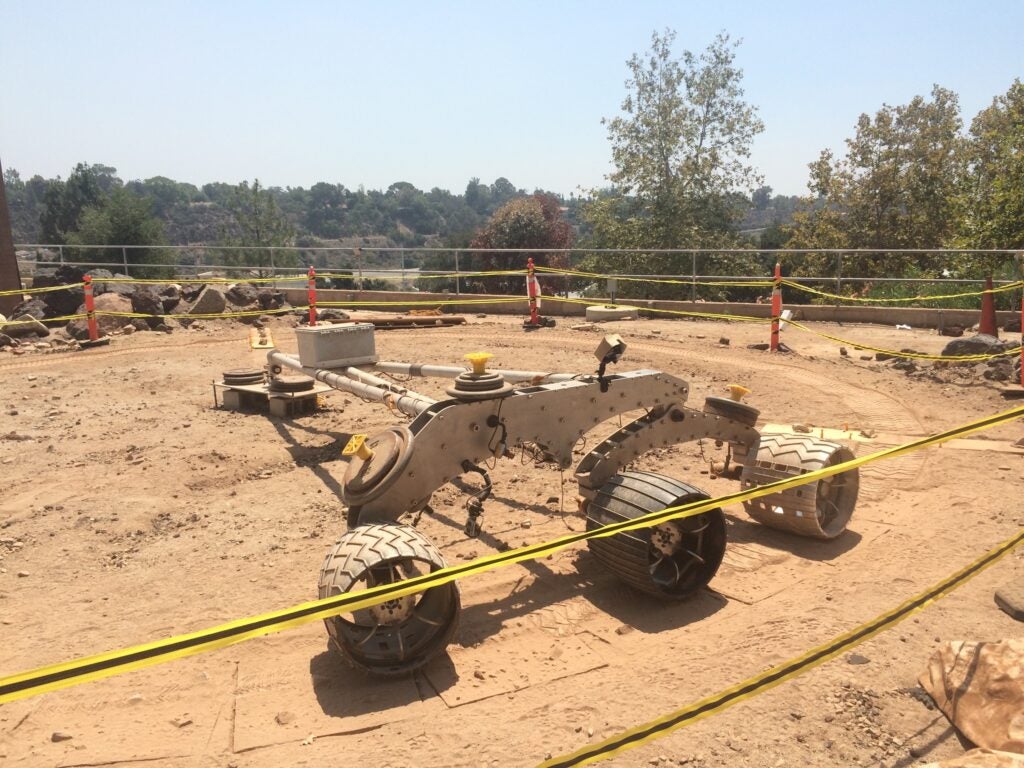 Weir is in person exactly who you’d like for him to be, and wears the expression and intonations of the luckiest nerd in the world. When he tells his story, the story of his book, he uses the word Cinderella, often. I asked Green about just why it is that NASA appeared to be all in on this particular film. He told me about the call from Ridley Scott, how cool that was, and how amazing it was to lead his set designer, the same guy who made the arenas in Gladiator, around the habitations they were building for Mars, what smart questions he asked, how many details he wanted to get right, and were right, in the film. There was something magical about seeing one’s work reflected on the big screen and, of course, getting the public excited, too. “After all,” he said, “we’re for the public.”

Space—and a wildly expensive, risky, and long manned mission to Mars in particular—cannot simply be cool. It must be compelling. It must be part of the conversation. Enough so that you maybe want to write your congressman or, at least, get angry about NASA’s dwindling budget. It has to be more than an idea, too. Everything is advertising and everything is political, particularly with a public agency funded by our tax dollars. So if you want to understand why it is that NASA loves The Martian and is so gung ho for this movie, you have to realize that this movie more or less presents exactly their future vision, minus all the drama.

The evening before I saw the film and visited JPL, I mentioned the trip and the movie to a group of friends I was with, and the conversation quickly drifted into the ridiculousness of space travel. One of them cited Steven King’s argument, that it might be better to stick to our corner of the universe, so as not to alert more advanced life forms, which will, if they find us, almost certainly wipe us out, based on our own crummy human history of a more advanced civilizations encountering, then quickly destroying, less ones. Someone else mentioned just how insane it was to spend so much money on visiting a different planet when ours was so much more hospitable. A different friend changed the music to the great Gil Scott Heron song, “Whitey on the Moon.” A rat done bit my sister Nell/ With Whitey on the moon/ Her face and arms began to swell/ And Whitey’s on the moon.

Of course, the next morning, watching Matt Damon MacGyver his way across Mars, I forgot about all of the very expensive problems right here, where we can breath, and it’s beautiful. Mostly, as I watched, what I was thinking was, “Isn’t it amazing humans can do this?” And yes, it was just a movie—but also, yes, we can.