Why Does Everyone Suddenly Want to Go to Astronaut School?

When NASA announced last year that it would be accepting candidates for its two-year astronaut training program, it received more... 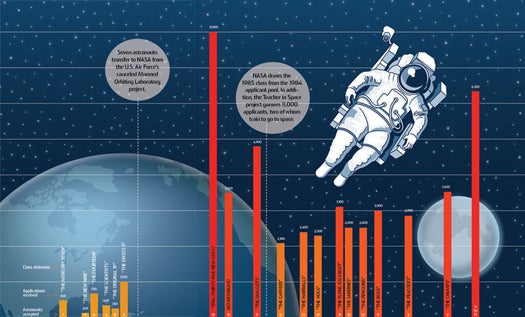 When NASA announced last year that it would be accepting candidates for its two-year astronaut training program, it received more than 6,300 applications—the most since 1978, when word of the agency’s newly launched shuttle program drew a still-record 8,000 applications. The events of 1978 and 2012, when the last shuttle flew, are not unrelated. “The fact that the shuttle was going away, a lot of people had seen that,” says Duane Ross, who has overseen every astronaut class at Johnson Space Center since 1975. “When NASA is in the news, it drives interest.”

NASA has opened the application window 19 times since President Dwight D. Eisenhower signed the bill that created the agency in 1959. In 1978 and 1996, the two largest class years, it accepted 35 candidates. This time, though, it will accept no more than 15, to be announced in spring 2013, and the next recruitment round probably won’t take place until 2017. Those who don’t make the cut shouldn’t abandon hope, though. One astronaut who joined the program in 1996 was accepted only after he had been applying for 12 years.