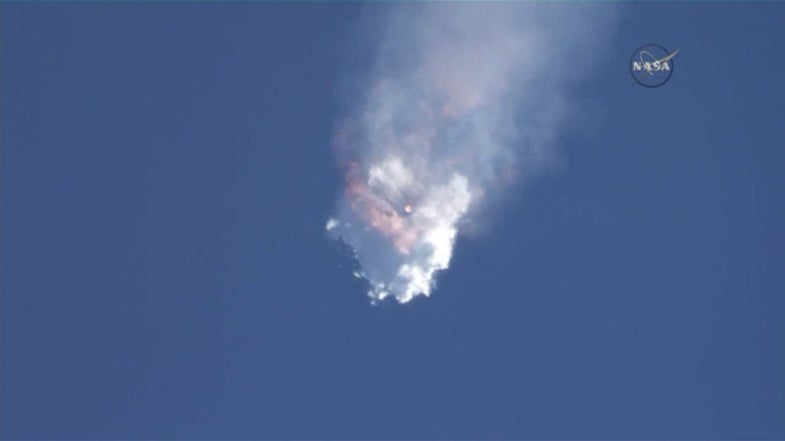 A failed steel strut holding down a canister of helium probably caused SpaceX’s Falcon 9 rocket to explode shortly after liftoff last month, SpaceX CEO Elon Musk said today. But the Dragon capsule riding on that rocket, bound for the International Space Station, would likely have survived if only software had been programmed to unfurl its parachute.

The June 28 explosion — the third ISS resupply mission to fail since October — was a huge blow for SpaceX, which had a flawless safety record across seven years. Data from the rocket and the cargo capsule revealed a likely fatal flaw in the strut, made by a third-party supplier to SpaceX. The company is planning to switch struts for future rockets. Meanwhile, the ongoing investigation and rocket upgrades will spell delays for Falcon 9 and its successor, the Falcon Heavy, Musk said.

“It just goes to show rockets are a fundamentally difficult thing. Generally, when there’s an idiomatic expression about something, there’s a reason for it,” he said in a conference call with reporters. The company later posted an update on its website.

Falcon 9 rockets use liquid oxygen as propellant, and the fuel tanks are backfilled with helium, which maintains pressure in the tank as the fuel is burned. The two-foot-long struts holding down helium canisters are designed to withstand 10,000 pounds of force, but on June 28, one failed at just 2,000 pounds of force, Musk said. As the rocket careened skyward, the buoyancy forces of liftoff would have shot the bottle to the top of the tank in the rocket’s upper stage. This caused helium to spew into the oxygen tank and overpressurize it. All this happened within about nine-tenths of a second.

The rocket disintegrated and the Dragon cargo capsule plummeted into the ocean, carrying 4,000 pounds of supplies and experiments for the space station crew. But if Dragon had deployed its parachute, it may have survived, Musk said. It communicated with the ground until it dropped out of sight over the horizon, he said.

Dragon 2, the next-generation version that would eventually carry crew members into orbit, is designed with abort thrusters to push it away from a failing rocket. It also has software that will tell Dragon to deploy its parachute when it separates from the rocket. But the version that flies now doesn’t have the thrusters or that software, Musk said.

“One of the things we’ve decided to do is advance the software that was meant for Dragon 2 into Dragon 1, so that if this were to happen in the future, the spacecraft would save itself,” he said.

SpaceX is sending an autonomous underwater vehicle to search for Dragon debris, which might help engineers learn more about what happened. SpaceX engineers, as well as NASA and the Air Force, are still combing through telemetry from more than 3,000 data sources. The company is also making plans to switch struts and will test them all before launch, rather than relying on supplier data, Musk said.

The June 28 mishap was the first black mark in seven years for SpaceX, which has a contract to ferry cargo and eventually astronauts to and from the ISS. The failure won’t affect the company’s bid for the Commercial Crew Program, but it will push back the first Falcon Heavy launch until next spring, Musk said.

A sense of complacency settled over SpaceX after its many years of success, Musk added. He said before every launch, he sends a company-wide email asking whether anyone can think of any possible reason to hold off, and if so, to call him on his cell phone or send an email.

“But the 20th time I send that email, it just seems like, ‘There’s Elon being paranoid again.’ Maybe it doesn’t resonate with the same force,” he said. “But I think now everyone at the company appreciates how difficult it is to get rockets to orbit successfully, and I think we’ll be stronger for it.”