Or the lack of a plan, rather 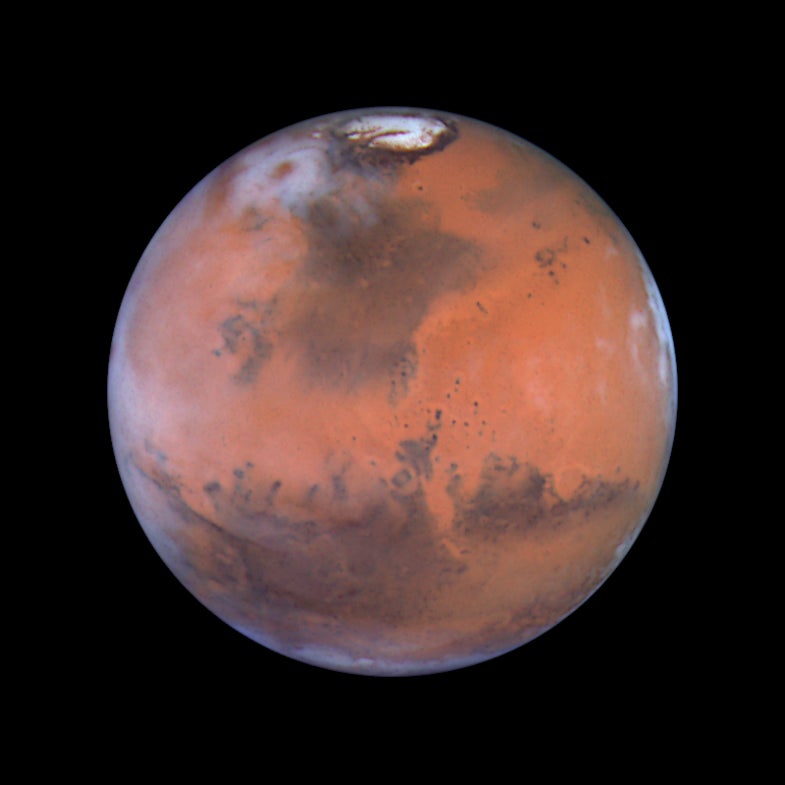 In the spring of 1999, Mars came closer to Earth than it had since Hubble’s launch, and the space telescope snapped plenty of pictures of the Red Planet. This one shows the water-ice polar cap of Mars’s northern hemisphere, light clouds of early morning along the left limb, and a cyclone churning near the pole. The landing site of the Mars Pathfinder rover, which had bounced onto the planet’s surface two years earlier, is at the center of the image—at the bottom of the big dark patch just below the icy north pole. Steve Lee (University of Colorado), Jim Bell (Cornell University), Mike Wolff (Space Science Institute), and NASA
SHARE

If NASA really wants to send humans to Mars in the 2030s, it needs to up its game. That’s according to the latest report from the Aerospace Safety Advisory Panel (ASAP), a group that advises NASA on safety issues.

The report raises some serious safety concerns over the rocket and spacecraft that will send NASA astronauts to Mars. The report also says that NASA’s overall plan to get to Mars is too vague.

The lack of a clearly defined plan could put the “Journey to Mars” at risk.

Part of the problem, as the report points out, is political uncertainty. NASA scientists spent years during the Bush administration planning the Constellation program—a plan to send humans back to the moon and then on to Mars–which mostly got scrapped when President Obama took office. With another election year coming up, NASA officials may be reluctant to enter into any major projects.

However, by not spelling out a clearly defined plan for getting to Mars, the space agency could be putting the Journey to Mars program at risk.

We should also consider going back to the moon before Mars, according to the report. Everyone and their brother is taking aim at the moon these days—from the European Space Agency to Russia and private companies. Plus, says the report, it is “unclear how NASA will develop low-gravity surface experience and technology without lunar surface experience.”

It makes sense that we should learn to live on the moon before going all the way to the red planet. But it would also come at an added cost to the already cash-strapped space agency. And it will probably require an Administration change; President Obama’s attitude toward human exploration of the moon is basically “been there, done that.”

Continuing the ISS past 2024 may delay the Journey to Mars.

Finally, it looks like NASA may have to choose between maintaining the International Space Station and getting to Mars.

America’s space agency has some tough choices ahead. NASA is often praised for doing so much on such a relatively small budget, but lately it seems the agency is spreading itself too thin. Sometimes, less is more.