Why Is NASA Developing Nasal Spray For The Masses?

Astro-spray: Coming to a drugstore near you? 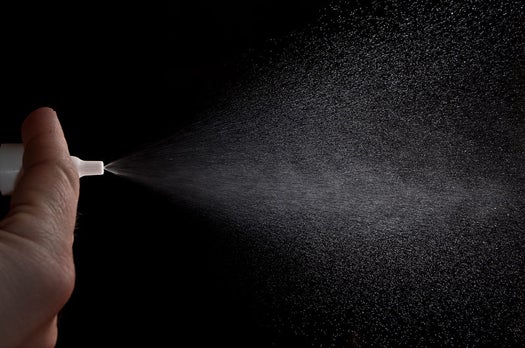 You probably have some of NASA’s inventions lying around your house. Memory foam? Check. Water filters? Yep. Smoke detectors? Thank NASA for that, too. The space agency has perfected the science of transforming astro-tech into everyday goods. Its latest innovation? Nasal spray.

NASA is developing a nasal spray version of Scopalamine, a drug for treating motion sickness. Motion sickness occurs when the central nervous system gets conflicting messages from the other systems. Usually, the inner ear detects motion when the eye doesn’t, or vice versa. The current prevailing theory is that your brain then decides you’re hallucinating from the poison of your choice (or blunder) and then proceeds to purge said poison. Now imagine all of that going on–but in space.

NASA is trying to commercialize the nasal spray for astronauts, for the Department of Defense, and for general use. Intranasal Scopalamine, or Inscop, has worked faster and more reliably than the oral form of the drug in NASA’s tests.

NASA’s agreement (authorized by the National Aeronautics and Space Act) with Epiomed Therapeutics, Inc., a pharmaceutical company based out of Irvine, CA., will conduct clinical trials so that Intranasal Scopalamine, or Inscop, can be approved by the FDA. Researchers have looked at a nasal form of Scopalamine for more than 50 years, but it hasn’t yet been formulated for FDA clinical trials.

“Nasal delivery technology is more advanced now than before–-also the effectiveness of intranasal dosing is well recognized and understood now than ever-–we have vaccines (that have been developed long ago) for nasal delivery now,” NASA Spokesman William Jeffs said in an email. “There is more demand for more effective motion sickness drugs all around including military and baby boomer recreational travelers.”

Jeffs said that NASA hopes to develop and market more drugs to the public in the future as similar commercial partnership opportunities present themselves.

“NASA scientists and engineers recognize that spinning inventions and technologies with commercial partnerships is a win-win way of business for NASA and for private sector, both in terms of intellectual and economic gains,” he said.