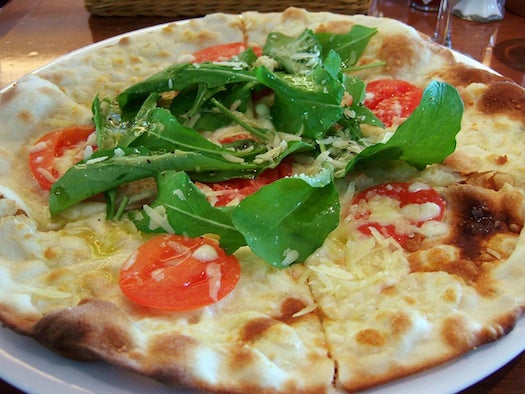 It would take a lot of food to get astronauts to Mars, but what if they could get whatever they wanted at the push of a button?

NASA is funding an ambitious 3-D printing food project that wants to make that happen, Quartz reports. The space agency’s handing over to mechanical engineer Anjan Contractor and his company, Systems & Materials Research Corporation, to spend building a prototype universal food synthesizer. And it could make pizza.

Contractor’s food synthesizer would print layers of food from cartridges of powders and oils, creating a perfectly nutritious meal. (It can actually print from any “organic” material with the right ingredients inside, so insect-based pizza may be the proteinaceous meal of choice.) Contractor has already made a chocolate printer as a proof of concept, and now is moving on to a pizza printer.

A pie’s a good candidate for this because its made from discrete sections. Each print head would only have the job of printing : either the dough, which would be cooked by a hot plate while being printed; the sauce, which would be a mixture of tomato powder, oil, and water; or the ambiguous, gross-sounding “protein layer,” which could be made from milk, animals, or plants.

The cartridges would all have a 30-year shelf-life, enough time for, say, a trip to Mars. The astronauts can switch to real cooking once they get there.