If an astronaut gets hurt on the moon, this is how we’ll rescue them

In the event of a lunar emergency, use pulleys. 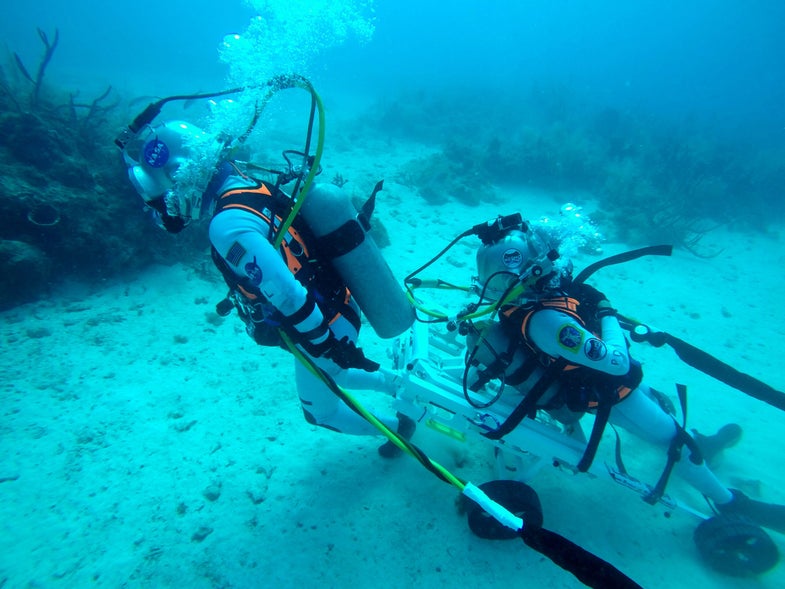 Looks like we’re going back to the moon. Last week, Vice President Mike Pence announced a new priority to put Americans on the lunar surface for the first time since 1972.

If we do manage to return to our natural satellite—no budget or specific timeline was released during the announcement—then it will likely be for a longer period of time than the short Apollo missions, and will almost certainly involve longer moonwalks. That means more time for something to go wrong, and more of a need for plans and equipment ready in case of emergency.

Luckily, scientists and engineers are already working to figure out how to help a fallen astronaut, without resorting to Mark Watney-level MacGyvering.

Last October, Hervé Stevenin, the head of the European Space Agency’s Neutral Buoyancy Facility Operations, designed a system called the Lunar Evacuation System Assembly (LESA), which could be used by future astronauts to drag an incapacitated colleague to safety during a moonwalk. By March, Stevenin—whose day job involves training European astronauts for spacewalks—had collaborated with a team to generate a working prototype, and in late June, aquanauts at an undersea base off the coast of Florida tested the rescue-machine in conditions as close to those found on the moon as possible.

An astronaut’s health is carefully monitored and screened, so flight engineers are less worried about heart attacks or illnesses than, for example, a malfunction in a spacesuit that could incapacitate an otherwise healthy person. A busted cooling unit could cause the astronaut to overheat, a crack could lead to low oxygen levels, a scrubber could fail to convert carbon dioxide to oxygen fast enough, and so on. The moon is a harsh mistress indeed.

“The moon is an extreme environment, with temperatures 100 degrees Celsius in the sun side, minus 150 Celsius in the dark, with abrasive dust sticking everywhere. You can fall down and hit a rock, you don’t know what would happen,” Stevenin says.

If an astronaut falls to the ground and can’t get up, problems pile up fast. Their companion—just like a spacewalk on the ISS, lunar astronauts will likely work in pairs—is also in a bulky spacesuit that restricts movement, which means they can’t simply bend over and pick up their partner. And unlike the ISS, it’s not simply a matter of attaching a tether to the other astronaut and hauling them to safety—lunar gravity isn’t as strong as Earth’s, but it is strong enough that picking up an adult is still difficult.

“In a spacesuit the movements are limited and your reaching capabilities are limited,” Stevenin says. “Even with the new ones, you cannot kneel down with both knees on the floor, which means you can’t take the guy on your shoulder and carry him back to the safe haven.”

Previous efforts attempted to use a more conventional stretcher failed, but the Earth-based tech proved no match for lunar constraints.

“It was extremely difficult, and it was clear this was violating the movement of a space suit,” Stevenin says of the stretcher test. “We know that if we go on an EVA [extra-vehicular activity] on the moon, we need to have the capability to rescue an incapacitated crewmember. But today this is not possible.”

That’s where the tripod-like LESA can step in and lend a helping pulley.

The current iteration of LESA looks like a slimmed-down cross between a large tripod (but a with four legs) and a hand truck.

If an astronaut notices that their buddy isn’t moving, they can run over and grab LESA and set it up over the fallen victim. A pulley on LESA is attached to the spacesuit, and the rescuer can hoist their companion to a standing position without having to bend down in their cumbersome attire.

Then a stretcher with two wheels on the bottom can be strapped around the victim, enabling the rescuer to drag their companion to what Stevenin calls a safe haven, either a base or a lander where the person in peril can be safely removed from their spacesuit and treated.

And the best part is, it can be easily operated by a single person, as ESA astronaut Pedro Duque and NASA astronaut Kjell Lindgren demonstrated on the seafloor back in June.

Two heads are better than three

“Usually when you have a rescue you have multiple rescuers,” Stevenin says. “There’s no [mobility] issue on the Moon if you send three guys out. If one becomes incapacitated you put one in the front, one in the back, and you carry the guy like you do on Earth.”

Sounds simple, right? But putting an extra person out on an EVA mission is drastically more expensive than sending two. It means an extra (expensive) spacesuit that would be subjected to wear and tear on a regular basis, larger moon buggies to carry the extra person around, and the chance of an additional loss of air in a moon habitat every time that additional astronaut entered and left. In some ways, they’re all little aspects of wear and tear, but over time, they add up.

The easier solution? Have something like LESA that can simply be strapped to the moon buggy or rolled along on a scientific trek without encumbering the two people already on the surface.

LESA was tested during NASA’s 22nd Extreme Environment Mission Operations (NEEMO-22), held at the Aquarius research base in the Florida Keys.

Bill Todd runs the NEEMO programs for NASA, coordinating 10 day missions to the habitat five miles off the cost of the Florida Keys and 62 feet below the surface. The remote location means that researchers and astronauts (called aquanauts for the duration of their underwater adventures) can test equipment, run geology and science experiments, and test the limits of human physiology without ever having to leave the planet.

“You’re living and working in an isolated extreme condition. You can’t leave. You are bound to be there until you go through decompression, which takes about the same amount of time as it takes to do an emergency deorbit,” Todd says.

On NEEMO-22, half of the 10 day mission was spent with a communications delay matched to a Mars mission, and half with a delay mimicking a moon mission. The delay meant that the team at the bottom of the ocean had some guidance from the surface, but minute-to-minute, they were mostly left to figure things out as they went along—just like they would on a mission off-planet.

The underwater environment also meant that they could test how their equipment, like LESA, works in gravity conditions similar to the Moon or Mars, making it an invaluable proving ground, and a more rugged, field-tested environment than the Neutral Buoyancy Pools on land where equipment is typically put through its paces.

When I spoke with Stevenin back in August, he hoped to test the next iteration of LESA on a NEEMO mission in the spring, incorporating what he’d learned from the testing over the summer. But that will require the Aquarius habitat where NEEMO is housed to be in working condition. Sadly, when Hurricane Irma hit Florida last month, it severely damaged the underwater lab.

On a fundraising website raising money for repairs to the storm damaged structure, an update on the lab reports:

The life support buoy has since been recovered and towed into a nearby shipyard to repair, but efforts to fix both the buoy and life support systems may take time.

In the meantime, astronauts and aquanauts will continue to train and develop new tech, making preparations here on Earth for the safest ascent to the stars.

Correction: An earlier version of this article mistakenly stated the depth of NASA’s underwater lab as 62 miles. This has been corrected.