A History Of Spacesuits, In Pictures

Brett Gooden 's Spacesuit: A History through Fact and Fiction traces the evolution of early spacewear. 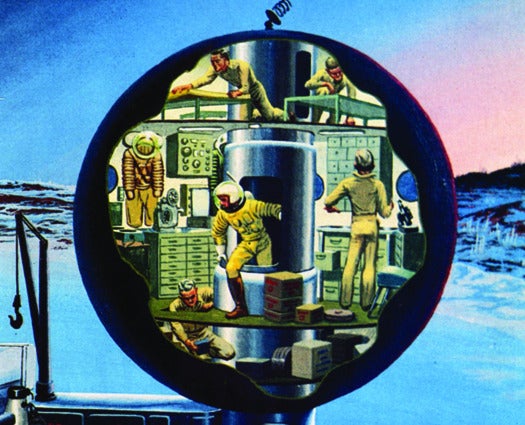 We’ve been working on fashion for the final frontier since the 19th century, when Jules Verne suggested in Around The Moon that space travel might require some sort of suit, like those worn by divers.

Since then, space travel has gone from science fiction to tweetable real-life experience. With that, our designs for protective gear–both real and imagined–have gone from impractical to immobilizing to workable.

In Spacesuit: A History through Fact and Fiction, Brett Gooden traces the development of astronaut outwear in both fact and fiction from the first hot air balloon flight in the late 1700s to the present. Along the way, you get an inside look at suit innovation during the Cold War space race.

The modern space suit mildly resembles a high-tech snow onesie (eeee), but hey, things could have been worse; early prototypes for lunar suits featured a rigid “canned” design, and others would go skintight in an emergency to try to keep your body parts from boiling. 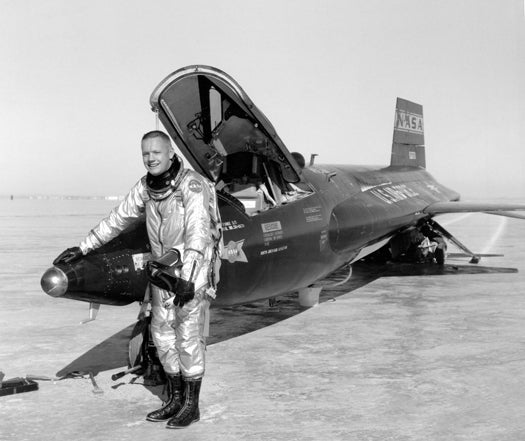 In 1960, as a pilot for the Dryden Research Flight Center, future moon-walker Neil Armstrong wore a full pressure suit during research flights on the X-15 rocket plane. The plane was designed to fly at speeds up to seven times the speed of sound and altitudes up to 50 miles. The program was instrumental in developing later space flight missions, and the pressure suit paved the way for future spacesuit innovation. 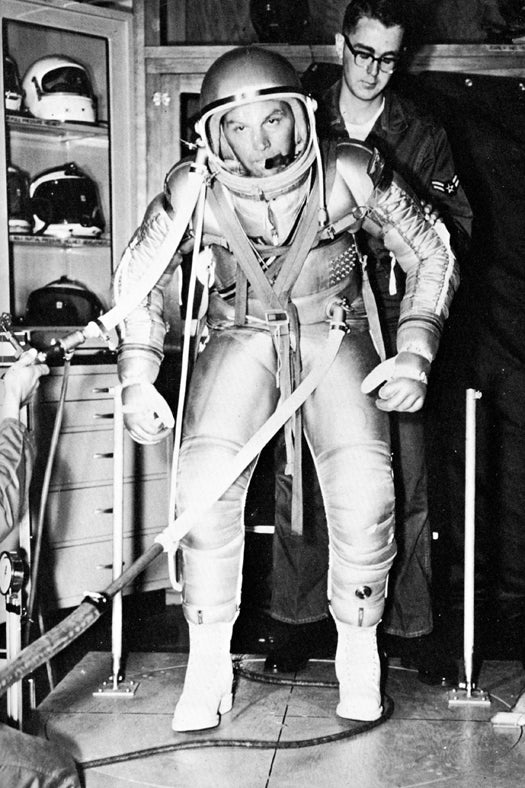 Project Mercury, NASA’s first manned space program, used a modified suit based on a pressure suit the Navy made for squadrons in colder areas of the U.S. The Mercury spacesuit featured a torso personally tailored to each of the seven astronauts on the mission. Unfortunately, mobility was a major struggle in designing early spacesuits, and when the suit was pressurized (in the event the cabin lost pressure) astronauts were essentially immobilized. 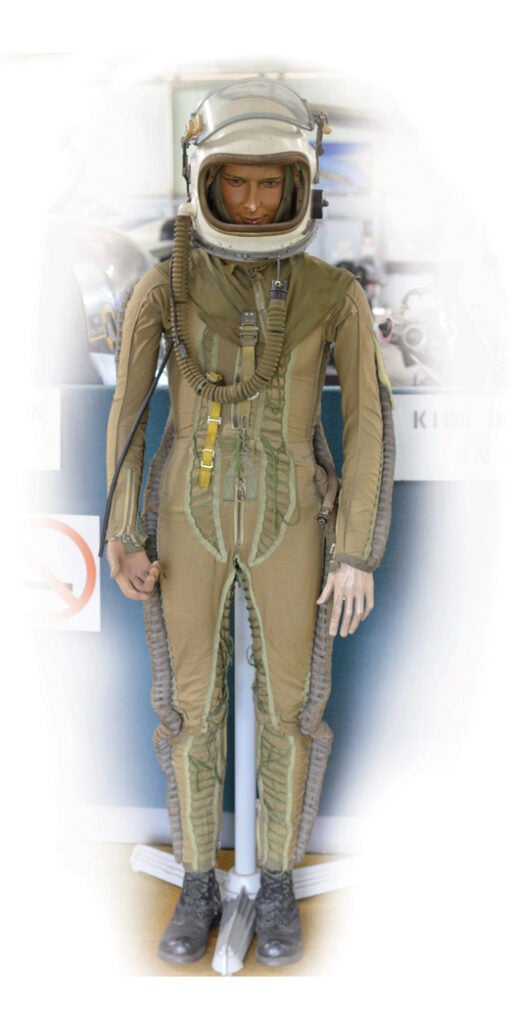 The Soviet Union began developing pressure suits in the 1930s. This early partial pressure suit had tubes running down the arms, legs and back so that in the case of pressure loss, the suit could tighten over the body and reduce any swelling that might occur due to body parts boiling. Keeping the suit taut prevented gas bubbles from forming in the body tissue. 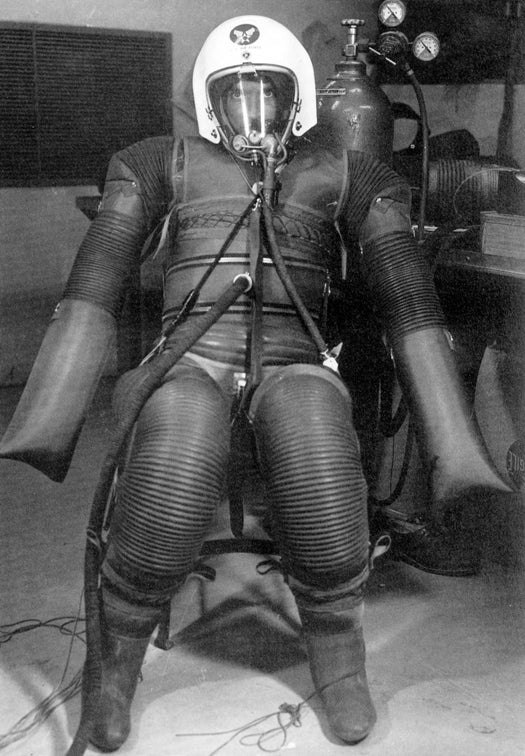 In 1956, the Navy and Air Force awarded the International Latex Corporation a contract to develop high-altitude pressure suits. This prototype didn’t have arms yet, but it featured new bellows joints — a huge step forward for a suit’s range of movement. 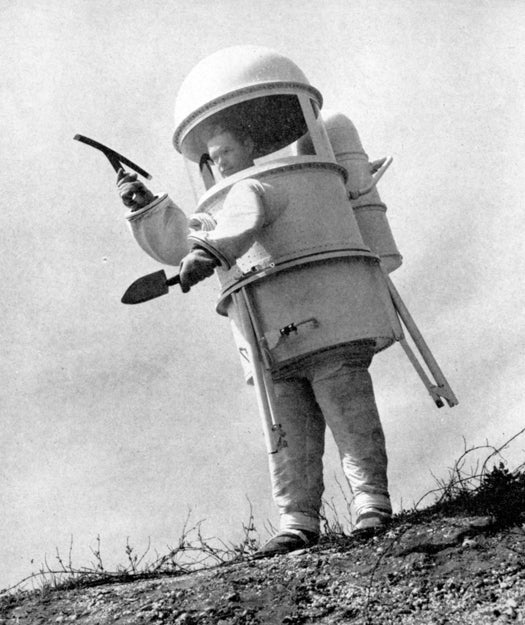 With the onset of the space race in the late 1950s, the U.S. government made huge amounts of money available for aerospace innovation. Moon suit designs poured in, some less than practical that others. This awesome man-can prototype was designed with three extendable legs, so that the astronaut could pull his legs back into the capsule to rest. 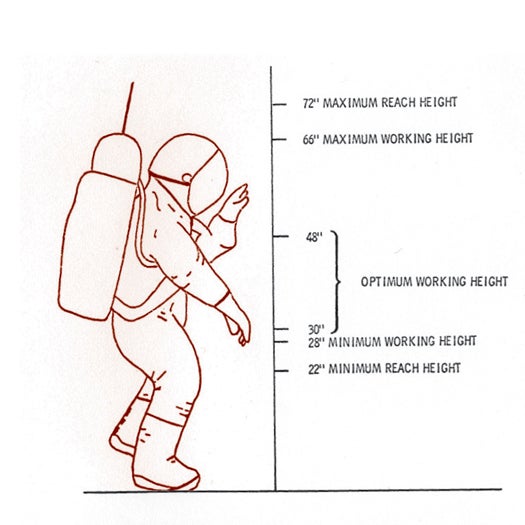 The Apollo missions required astronauts to actually leave their spacecraft, walk around and take surface samples on the Moon. That kind of mobility would have been impossible with the kind of suits used on previous missions. The 20-layer A7L lunar suit was a giant leap forward, but it didn’t exactly allow for astronaut yoga. 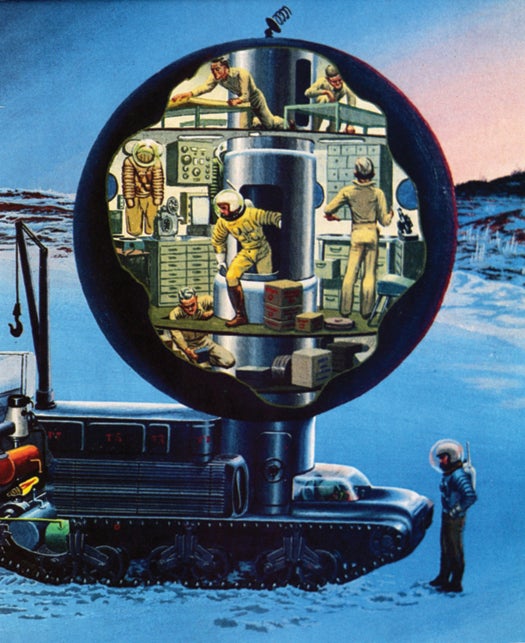 In 1954, a series of Collier’s magazine articles imagined the particulars of a manned mission to Mars. This illustration shows future astronauts in partial pressure suits designed to protect them from the vacuum of space. But the actual pressure on Mars is 138 times smaller than the pressure we estimated in the 1950s, and an astronaut would need a full pressure suit — one that could also protect against solar radiation, dust storms and micrometeoroids. 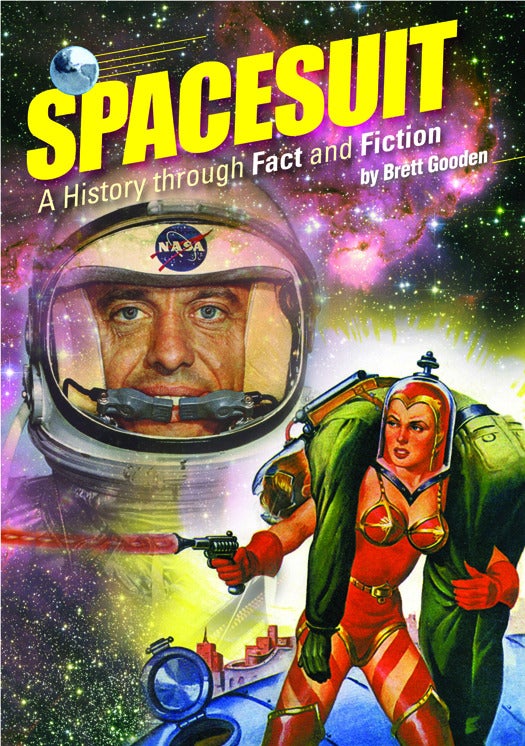