How Will We Eat On Mars? 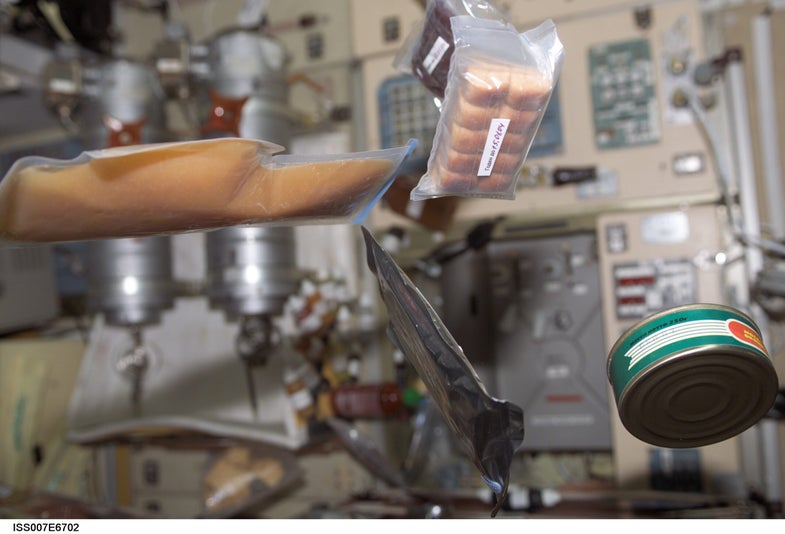 Making a meal for your family or a group of hungry friends can be challenging enough. Now imagine trying to feed three people 250 miles above the Earth, who for months at a time will have no access to grocery stores or drive-thrus. All the menus you create have to be nutritionally balanced. The food needs to survive for months without refrigeration, and it needs to be pretty good, too–eating is one of the few comforts during an astronaut’s long-term stay on the International Space Station. 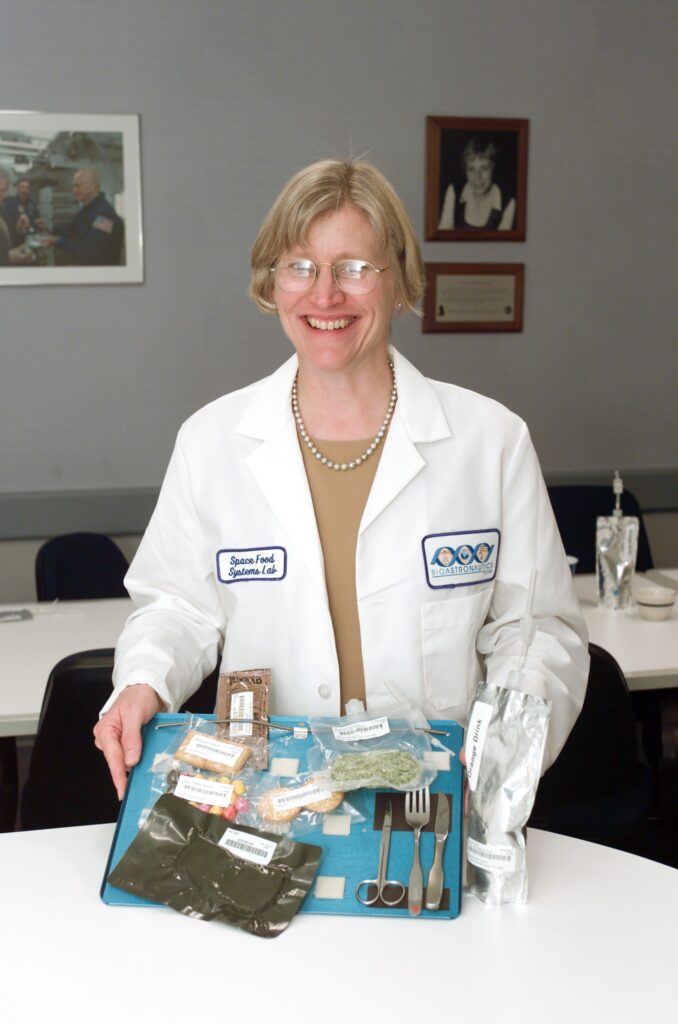 Vickie Kloeris’ job is to feed those astronauts. As one of NASA’s top food scientists, she manages the agency’s food laboratory as well as the ISS’s food system, making sure everyone onboard has plenty to eat and a varying menu. She’s also spent her fair share of time up new recipes for the space station residents, spending months perfecting a meal that can be freeze-dried and sterilized.

But, even as challenging as all that sounds, the space station is practically right in Earth’s backyard–venturing deeper into space will to be a lot more difficult. NASA is aiming to put the first humans on Mars in the 2030s or 40s, and contrary to popular belief, the first missions to Mars probably aren’t going to be able to depend on hydroponic greenhouses for food. It’s up to NASA’s food scientists to design and create all the food for the three-year journey to Mars and back, and that’s raising some interesting new challenges. We talked with Kloeris to find out more.

The following interview has been edited and condensed.

Popular Science: What are some of the biggest challenges in designing food for a trip to Mars?

Vickie Kloeris: For the initial trip to Mars, the food will almost all be pre-positioned, so that it’s waiting for them when they arrive. If you consider it’s a 6-month trip to Mars, that food is going to be 5 to 7 years old when they get there. 1

The challenge is having enough variety of foods that will last for that length of time, and will be high enough quality that the astronauts won’t quit eating. There is a very real phenomenon called menu fatigue, where if people don’t have enough variety or they get really bored with the food system, then they tend to eat enough to survive and not enough to thrive. We want the crew to be at top performance.

If people don’t have enough food variety, then they tend to only eat enough to survive and not enough to thrive.

The other challenge that we have is that the nutritional content of this food will decay over time. Even though our food packages are considered sterile, there are chemical reactions that take pace. The color is going to change, the texture is going to change, and the nutrition degrades over time. We need to know, after 5 to 7 years, how much nutrition is it really going to have left in it, and will there be certain nutrients that will be too scarce?

To find out, we’ve taken some of our current products and we’re doing shelf-life studies to see how the nutrients survive over time.

Will you have to develop new recipes to ensure there’s enough variety for astronauts on Mars?

We have about 200 different foods and beverages in our core menu on the ISS. So really I think that the amount of variety we have now is adequate, but the problem is that not all the foods we have now will be able to last that long. We can make foods that from a microbiological point will be safe to eat, but the quality of it and the nutritional content of it would be very questionable.

What can you do about the nutrient problem?

There is the possibility of fortification. You could put an excessive amount of a nutrient in the food to begin with, so that when it degrades over time, it’ll still be at an acceptable level.

The military has some of the same concerns that we do–they’d love to make food that lasts a really long time for the troops, so we’ve actually partnered with them on some research that’s being done. They’re looking into two emerging technologies: high pressure processing and microwave sterilization2. The advantages to these two technologies is that theoretically they don’t do as much heat damage to the food that you’re processing. If you’re applying less heat or for a shorter period of time, you degrade fewer nutrients. And if you’re starting at a higher level of nutrients, you can end with a higher level.

Are there other concerns about feeding astronauts on Mars?

Deep space radiation and its effects on food are kind of an unknown at this time, and one of the problems that we have is there’s no good way to recreate that on Earth to test it.

A few years ago we did an experiment. We kept control sets of food and medicine on the ground, and sent equivalent items to the ISS, then brought them back and compared. Radiation in low Earth orbit on the ISS did not have a significant effect on the food’s quality and nutrients. But that kind of radiation is quite different from when they totally leave Earth’s atmosphere.

Deep space radiation and its effects on food are unknown

NASA is looking at having a small waypoint destination somewhere near the moon. We’re looking at possibly sending food there, and possibly keeping in there for a while to see what effect deep space radiation might have on the food.

Will Mars explorers grow their own food?

One of the things that I definitely see happening would be them growing some pick-and-eat items in something like the Veggie machine. The volume of what they’re going to be able to grow is going to be so small that it’s probably not going to have a significant contribution to their nutrition, but it will probably have a huge psychological contribution. 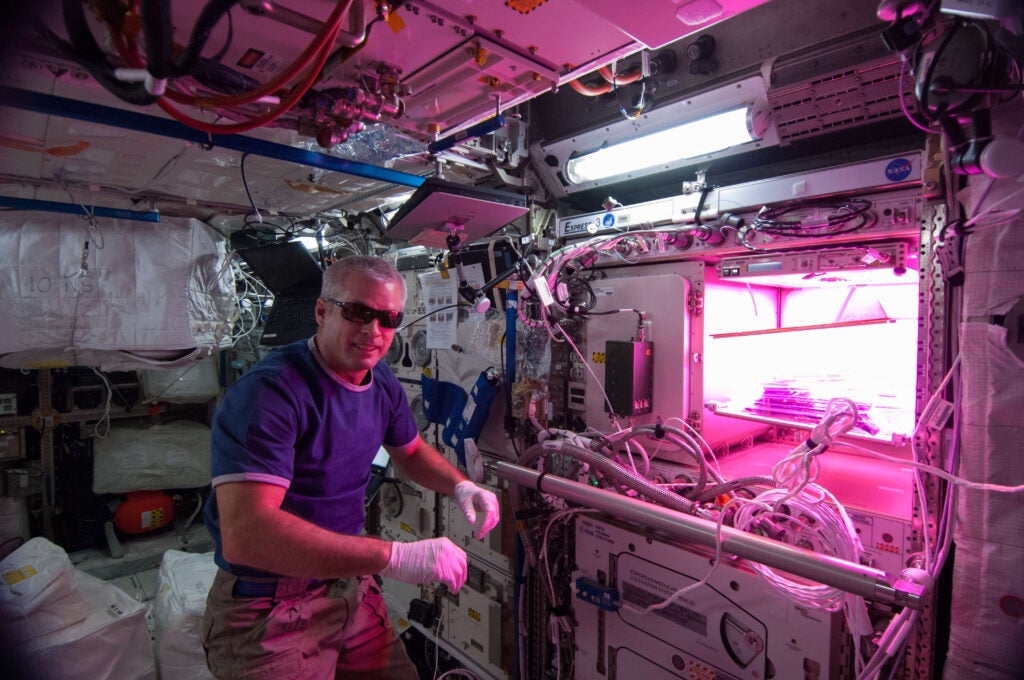 About the size of a microwave oven, incubators like Veggie could help future Mars explorers grow food, but probably only in very small quantities at first.

The idea of growing significant amounts of food on that first mission is probably just not going to happen. If we really make the commitment to colonize mars, to actually keep people there like on the ISS, then you’re probably going to have some kind of module to grow plants continuously.

What role will 3D printing play in martian meals?

The thing about 3D printing of tools and parts is, there’s a lot of incentive to carry that forward and to perfect that technology. People have demonstrated they could make lighter-weight parts for airplanes that actually are stronger than what they were producing before. For 3D printing of food, there’s not so much of a financial incentive. Right now it’s much more of a fad, but it all depends on what happens with the technology going forward.

What if 3D printing of food improves?

Then the tradeoff is going to be, can you get enough products out of that 3d printer to make it worth the mass and the volume it takes to get it to Mars?

Insects are another recent food fad. Could bugs becoming a part of an astronaut’s diet?

[Laughs] I don’t see that happening. Food is one of the few creature comforts that the astronauts have, so the food has become really important from a psychological perspective.

I worked on practically every shuttle mission, and those were so short, the food was not all that important. They thought, ‘It’s like a camping trip, I’ll find something I’ll like.’ 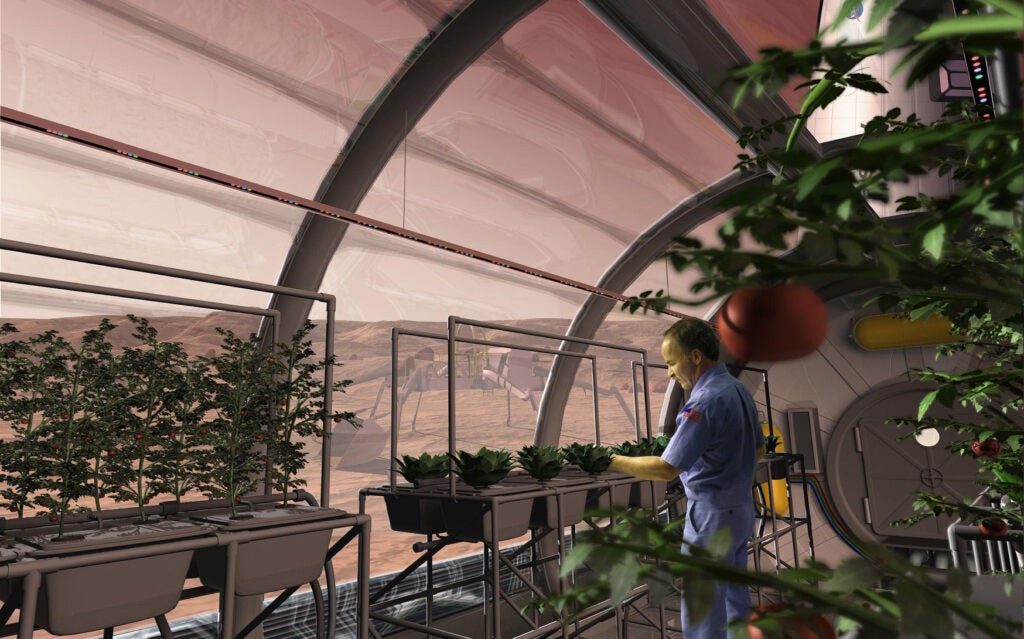 Conceptual Rendering Of A Greenhouse On Mars.

Long-term settlements on Mars could potentially grow their own food.

When we started doing long-duration stays on Mir and now the ISS, the crews quickly realized the food becomes more important from a psychological perspective. For Mars we’re talking about a three-year trip, so food is definitely going to be important. That’s why I personally believe we’re never going to have a lot of traction with getting them to eat algae or insects.

Will astronauts need to eat more food, or more of any particular nutrients, when they’re on Mars?

All of the research that we have done thus far indicates that there is no significant difference between [a person’s needs at Earth’s gravity] and microgravity. Experiments done on the shuttle program used doubly labeled water, where the astronaut ingests an isotope of water, and then you can trace it coming out in the urine. By tracing how much comes out, you can calculate exactly how many calories a person is using.

They did these experiments on shuttle astronauts, comparing when they were on ground and in orbit, and found no significant difference. Now, the shuttle flights were short, so because of that, the Europeans are repeating those experiments now on the ISS, to see if caloric needs change during longer a stay in space. It’ll be very interesting to see what they find.

The trip takes so long because NASA has to wait for Earth and Mars to be in their closest alignment, which happens about every two years. It also depends on what method of propulsion NASA uses to send the pre-supply missions to Mars–some methods are faster than others. Go back

Microwave sterilization still uses quite a bit of heat, but it applies it for a shorter period of time, which should also theoretically result in fewer chemical and nutritional changes.

These two sterilization techniques are still in the experimental stages, requiring approval from the FDA and USDA. If all goes well, companies would still need to find a way to scale the processes up in order to process large amounts of food. Go back