Earth’s most invasive species is a frog-killing fungus

The international pet trade has helped a fungal infection spread to 501 species of amphibians. 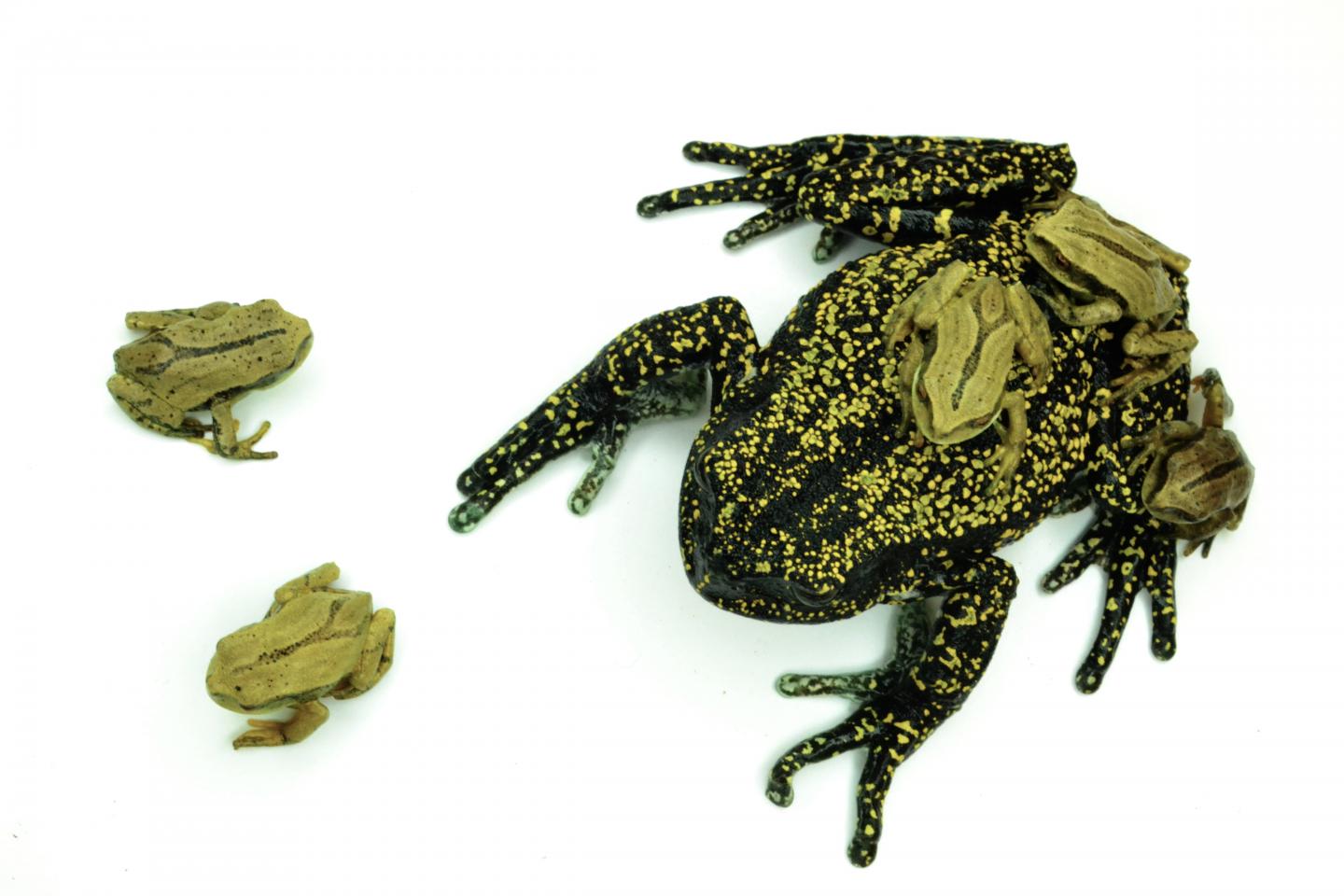 That’s the conclusion of a new study, published Thursday in Science, which quantified the global death toll of the amphibian-killing fungus. “Everyone knew [chytridiomycosis] was terrible, but we didn’t know the exact numbers,” says lead author Ben Scheele, an applied ecologist with the Australian National University. “Our paper quantified the impact as well as pieced together the when and where.”

The B. dendrobatidis pathogen species, the main cause of chytridiomycosis, originated in the Korean peninsula, according to a genome study from last year. Chytrid then appears to have spread through the international pet trade, starting in the early 20th century. The spores’ spread also coincides with the growth of global trade—some sickly frogs clearly hitchhiked between continents aboard ships.

Amphibians’ thin, moist skin—through which they breathe and absorb water—contains the protein keratin, the same compound in our hair and fingernails. The aquatic chytrid fungus, which spreads through skin contact and infected water, eats up this protein. As the fungus spreads across the animal’s skin, it impedes electrolyte transport, which is key to regulating bodily functions. Eventually, the infected frog, toad, or salamander dies of a heart attack.

Large numbers of frogs have succumbed to the fungus since at least the 1970s, but scientists didn’t identify chytrid until 1998. In 2007, scientists were able to attribute previous “enigmatic” frog deaths to chytrid and estimated that the infection had impacted some 200 frog species.

For the new study in Science, scientists surveyed literature and databases and consulted with experts worldwide, pooling together and mapping information on chytrid-related declines. “This is the most comprehensive update to our current understanding of ongoing global amphibian declines,” says Louise Rollins-Smith, a professor of pathology, microbiology, and immunology at Vanderbilt University, who was not involved in the research.

In the past 50 years, chytridiomycosis has ravaged 501 amphibian species, the study reports. Of these, 90 are presumed extinct. Toads and frogs across Central and South America and Australia have been hit the hardest. “This represents the greatest documented loss of biodiversity attributable to a pathogen and places B. dendrobatidis among the most destructive invasive species,” write the authors in the new study.

In comparison, cats threaten 430 species—mostly birds and small mammals—and invasive rodents threaten 420 species. Chytridiomycosis-caused species losses are much greater than other wildlife diseases, too, such as white-nose syndrome in bats or West Nile in birds.

While the fungus’ destruction peaked in the 1980s, 39 percent of amphibian species affected by the fungus are still declining. New outbreaks are becoming less frequent, but the disease still poses a global threat, especially when it jumps into new areas. “The documented declines have been occurring for approximately 40 to 50 years,” says Rollins-Smith. “But what is important is that we don’t become fatigued and lose sight of the fact that they are ongoing.”

The scientists were also able to use the global data to map and compare the types of environments that seemed to promote or inhibit survival. Chytrid thrives in cool and moist areas, such as those inhabited by the genus Atelopus, a brightly-colored frog living at high elevations in Central and Southern America. Many of these species are endangered or extinct. “I think that’s a striking result [of our study],” says Scheele. “You have this really amazing genus of of frogs and toads—really unique, really charismatic—and they’ve had extremely severe declines associated with chytrid fungus.”

Of the 501 species harmed by the fungus, 12 percent are making some progress toward recovery. In Yosemite National Park, for example, Sierra Nevada yellow-legged frogs are recovering in lakes across the park. But scientists have yet to witness broader, species-level recoveries. And we haven’t found a cure for sick amphibians or a way to eliminate the fungus. We don’t even know how long the fungus can hang around in bodies of water when there are no frogs to infect, adds Rollins-Smith.

Now, our best option is to take steps to prevent the disease from spreading, such by imposing more strict regulations on wildlife trade. “Hopefully, we will raise awareness for the serious threat that wildlife disease poses to biodiversity,” Scheele says. “As humans moving biological material all around the world at ever-increasing rates without our highly-globalized and connected world, we need to really think about biosecurity and the potential pathogens that could be hitchhiking.”