After a brief pause, carbon emissions are back on the rise

Time to turn words into action. 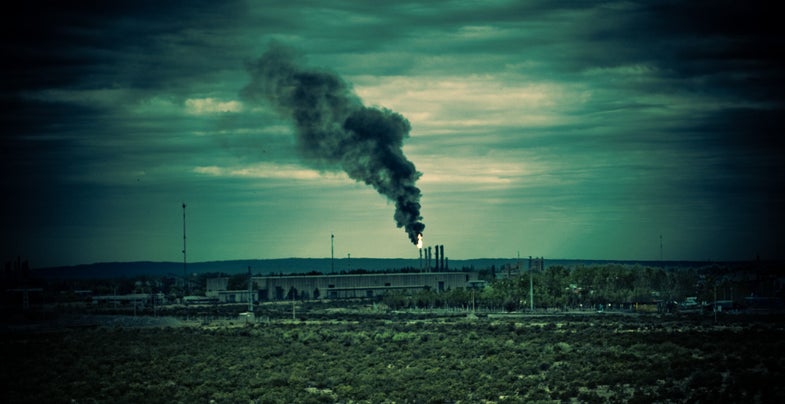 The road to a very hot place is paved with good intentions. No, not hell—just the future. Right now in Bonn, Germany, representatives from all over the world are at the UN Climate Change Conference discussing how to keep the world from warming beyond 1.5ºC, and how to reduce the emissions of greenhouse gases like carbon dioxide to a net zero by 2050. That means that we won’t put more greenhouse gases into the air than can be removed.

Those are the goals stated in the Paris Agreement, which now includes every country in the world—though the current administration in the United States has vowed to leave the pact.

But signing was the easy part. Turning those pledges into action is another matter entirely, as evidenced by new studies published Monday in Environmental Research Letters, Nature Climate Change, and Earth System Science Data. The research, conducted by the Global Carbon Project, found that carbon emissions for 2017 were expected to increase by 2 percent, the first increase after three years of leveled-off emissions.

There’s both good and bad news in the new reports. Let’s start with the bad news, and rip it off like a Band-Aid.

Carbon emissions are up. Again. There was a lull between 2014 and 2016 that led some researchers to think we’d finally hit peak emissions, and that it was all downhill from here to a carbon-neutral future.

Unfortunately, that now appears to be unduly optimistic, with human activities expected to release 41 billion tons of carbon into the atmosphere in 2017 alone. China, the largest lone carbon emitter in the world, is responsible for the jump, with an expected increase in emissions of 3.5 percent.

That’s partially attributable to that nation’s economic recovery after a four-year slump. Increased coal use pushed China’s emissions up higher than in the past few years. China also just had a dry spell, reducing the available hydropower.

Carbon emissions in the United States were down 0.4 percent, a smaller amount than declines in recent years. Countries in the EU followed the same trend. In the United States, lower oil prices and higher natural-gas prices offset growth in renewables and increased efficiency in buildings.

“Natural gas use declined, coal went up a little bit, and oil rose faster,” says Rob Jackson, a Stanford professor and co-author of the papers. In particular, changes in fossil fuel use in transportation—not just energy generation—dampened the nation’s emission decrease. “We’re driving more miles, buying larger cars, and as a result we’re using more oil than we had been, and that is a surprise.”

And while going up is clearly worse than staying steady, Jackson points out that being stabilized at a high point in emissions—like we were for the past few years—isn’t great either.

“It’s not enough to stabilize a torrent,” Jackson says. “Right now we’re trying to keep to that torrent from growing, but we need to start ratcheting that down to a trickle.”

“With global CO2 emissions from human activities estimated at 41 billion tons for 2017, time is running out on our ability to keep warming well below 2ºC, let alone 1.5ºC,” Corinne Le Quéré, a co-author of the research and director of the Tyndall Centre for Climate Change Research at the University of East Anglia, said in a statement.

OK, that’s all incredibly bleak. But there is a silver lining in those gathering storm clouds.

“A sense of hope is especially important this year. We can’t lose sight of the progress we’ve made,” Jackson says. “This year’s result is discouraging, but I have to stay optimistic that we are going to turn this corner. Eventually we are going to stabilize carbon emissions and start reducing them.”

And Jackson does have some reasons to be hopeful.

But that’s not necessarily the case any more. In 22 countries representing 20 percent of the global carbon total (mostly the United States and some European countries) emissions dropped as economies grew, as countries turned to more energy-efficient tools and renewable or lower-emission energy sources. That shows that it is possible for countries to make money, create jobs, and provide a better quality of life for their citizens without relying on fossil fuels.

“India’s emissions should rise only two percent, and that’s a lot lower than we’ve seen in the past decade,” Jackson says. And even though that’s an increase, it give him hope. Yes, India had some economic issues this year, but they’re also planning extensive expansions of solar power and other, cleaner forms of electricity to meet its goals. If India can put its power plants and cars where its signature is, it could show other nations that are still developing their economies a greener way forward.

“There are still hundreds of millions of people around the world that don’t have electricity,” Jackson says. “Where will those people get their energy from when they have access to electricity and when they are buying cars?”

The answer to that question is only going to get more important in the years ahead. It’s very possible that next year’s emissions will rise again, but that upward trajectory is not inevitable. A concerted international effort to find and use substitutes for ozone-destroying chemicals is paying off, 30 years later, showing that it’s not impossible for humans to change the world. International intentions can yield worldwide results, but only if they are followed with concrete actions.