Artificial snow might save a glacier in the Swiss Alps

But it can't save us from climate change 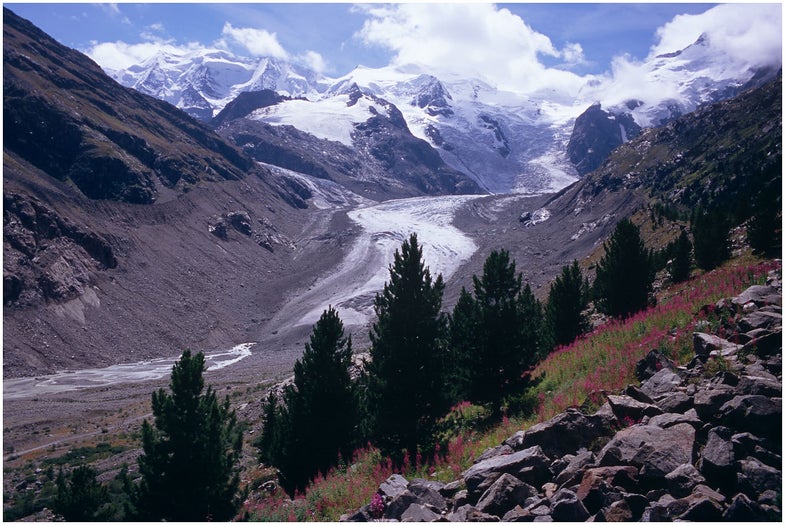 Morteratsch glacier, like many others, is shrinking. A popular tourist and skiing destination in the Swiss Alps, this large river of ice is losing about 115 feet per year, and the locals are not happy about it. So they commissioned a team of Swiss and Dutch researchers to try to do something about it. Their plan: spraying artificial snow to stop the glacier from melting.

It sounds a little crazy, but it might work. The fresh snow helps reflect away sunlight and insulate the glacier from heat. White fleece coverings reportedly helped to regrow a smaller glacier named Diavolezzafirn by 26 feet over 10 years.

To see if artificial snow works just as well, glaciologist Felix Keller of the Academia Engiadina in Switzerland and his team are in the midst of a new experiment. They’ve sprayed snow 8 feet deep over the 1,300-square-foot Diavolezzafirn glacier, just a few kilometers from Morteratsch. And by the end of the month, they’ll spray 5 feet more.

“We expect with four meters [13 feet] of snow, this will cover our glacier for the whole summer,” says Keller. “If successful, we are quite sure our idea could work to protect large glaciers from melting.”

To make it work on a larger scale, Keller and his colleagues don’t need to cover the entire 6.2-square-mile Morteratsch glacier in snow. Rather, their models suggest that targeting just one square kilometer (that’s about a third of a mile, squared) where the melting exceeds ice production could make a huge difference.

Still, blanketing one square kilometer in 13 feet of snow would be a huge undertaking. Thousands of snow machines will have to work through winter and springtime to pump out enough snow to cover the glacier through each summer. And they’ll need a lot of water to make the snow—something on the order of 6 to 8 thousand liters per second.

Fortunately for this project, another nearby glacier is shrinking too, creating huge meltwater lakes. If the Morteratsch project gets funded, Keller and his team would recycle the meltwater to make artificial snow.

Turning all that water into icy drifts may require a new kind of snow machine, because the glacier travels about 300 feet per year. Keller envisions modified cable cars spraying the snow from above. And the snow machines could potentially be powered by solar energy.

If the pilot project at Diavolezzafirn goes well and the team gets funding to go big, they will probably spend three or more years developing these new snow machines.

The new snow could even help the glacier regrow, although that is less than certain, says Keller. “But what we are sure of,” he says, “is that we can slow down the retreat significantly.”

Tourism is one reason the community around Morteratsch is interested in saving its glacier, but for Keller, it’s about much more than that. “If it were only for skiing, we shouldn’t do it,” he says. “In every mountain region, the most important thing about glaciers is they provide a water supply when there is no rain.”

Villagers in Ladakh, India depend on the meltwater from a Himalayan glacier when rains are sparse. Now that that particular glacier has melted away, the region faces droughts and failing crops. A few years ago, Keller assisted in building an artificial glacier to help save some of Ladakh’s winter water for the summertime. He sees the artificial snow idea as another way to protect the world’s water resources.

The method certainly has potential to ease some of the effects of climate change, but it is a Band-Aid. Artificial snow is unlikely to stop the gush of water from the huge Antarctic ice sheet that’s flooding our oceans as it melts, for example—the ice sheet is simply too big, says Keller.

And it’s a temporary solution to a problem that’s only going to get worse as the global temperature continues to rise. In the long run, the only way to save our glaciers is to reduce our carbon emissions.

Correction May 4, 2017 at 10:45am Eastern: A previous version of this article implied that the team would have to cover the entire Morteratsch glacier with snow to stop its melting. In fact, Keller and his team think that covering just a small part of the glacier could have a big impact.