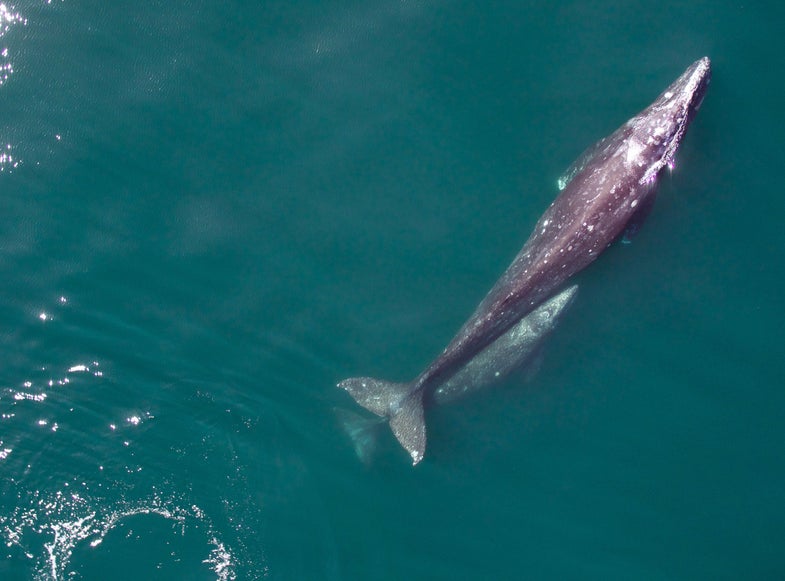 A gray whale and her calft migrate north along the California coast on their way to summer feeding grounds in the Arctic. Scientists are using an unmanned aerial vehicle to produce very precise overhead images of gray whales, then analyzing the images to understand how environmental conditions affect the health of adult females and ultimately the reproductive success of the population. Credit: NOAA.
SHARE

Ahab would give up his peg leg for views like this. A team with the National Oceanic and Atmospheric Administration used a drone to catch a better glimpse of migrating gray whales, capturing pictures of a mother and calf. The drone flyover was part of a long-standing research project in Baja California, Mexico, where scientists track the migrations of gray whales up north to the Arctic.

There is only so much one can tell about a whale seen through binoculars on land. The drone, a hexarotor spinning its six blades over and over, was able to film the whales from above, which let scientists look at their bodies and evaluate just how much blubber they had accumulated, and from that, what the survival odds are for mothers and calves. More blubber means better food and better chances, important information to have when making sure a once-endangered population is thriving.

Flying the drone at least 120 feet above the whales, the scientists got their pictures without disturbing the creatures. The drone carried an altimeter, so it would know at what precise height an image was taken, allowing comparison between photographs to account for different flight altitudes. There have been other studies of whales using drones (like this one centered around whale snot). Projects like that, and the research done by NOAA this spring shows drones can have a role to play in tracking marine populations.