Antarctica’s Blood Falls: not so mysterious, but still freaky as heck

Just some "blood" gurgling out of the ice, nothing to see here. 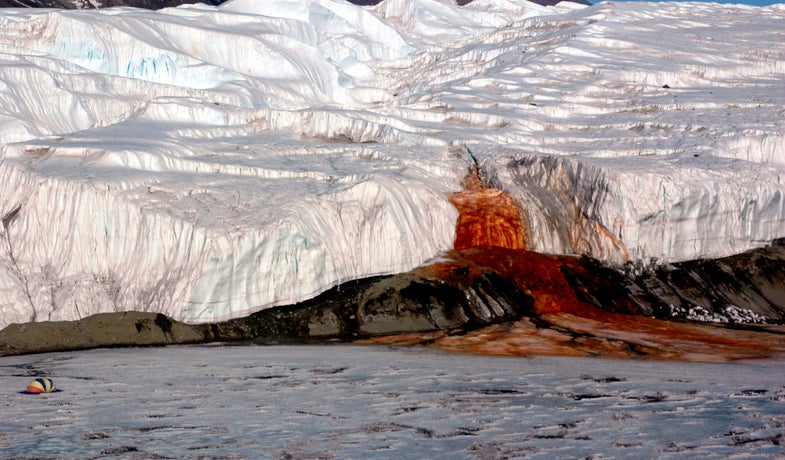 You may have seen headlines proclaiming that the great mystery of Antarctica’s “Blood Falls” has finally been solved. That’s a little silly, because the big mystery—the question of why blood-like bright red liquid oozes out of the otherwise white surface of Taylor Glacier—hasn’t been all that mysterious for some time. Two years ago, a study suggested that the water, a salty brine full of interesting microbial life and colored by a high level of iron, seems to come up from an underground waterway that connects visible lakes on the surface.

“It turns out that as beautiful and visceral as Blood Falls is in these valleys, it’s actually just a blip. It’s a little defect in this much more exciting feature,” microbiologist Jill Mikucki told The Washington Post in 2015.

But we digress. Blood Falls? Still awesome. And the latest research on their origins, while not as out-of-the-blue as some headlines might suggest, is still really cool. Essentially, the study turns the speculation of the 2015 paper into a confirmed fact—and includes some findings that could have major implications for our warming planet, too.

In a study published this week in the Journal of Glaciology, researchers (including Mikucki) report new information on the intriguing natural phenomenon’s plumbing: they believe they’ve traced the water’s exact starting point to an reservoir of brine beneath Taylor Glacier.

“We knew that there was a brine outflow creating the falls, and that 2015 paper pretty much verified that the salty water came from beneath the glacier,” lead study author Jessica Badgeley, a graduate student at the University of Washington, told PopSci. Badgeley conducted the research while she was an undergrad at Colorado College, working with the University of Alaska Fairbanks glaciologist Erin Pettit and her team. “The mystery that remained was the link between that source and the outflow. This is an unusual feature, and there are very few things like it. So it wasn’t obvious how you got the brine from below the glacier up to the surface.”

For starters, the glacier wasn’t supposed to have liquid water running through it at all. Salt lowers water’s freezing point, so brine stays sloshy for longer. “But that’s not enough,” Badgeley explained. “There’s another mechanism.”

She and her colleagues found that the brine actually warms itself up as it freezes. Sounds, wacky, sure, but we are talking about the Blood Falls. Here’s how that works: when water undergoes the phase change from liquid to frozen, it gives off heat—that’s just basic chemistry. In the case of the brine flowing through Taylor Glacier, the heat given off by the brine that does freeze is enough to keep the rest of it flowing.

The signature of that heat helped Badgeley and her team track down the water’s path: they sent radio waves into the glacier and measured the amount of time it took for the waves to bounce back, as well as how they changed during their journey. That told them about the glacier’s innards, and their results showed that an area inside was particularly warm and liquidy.

To confirm that there was indeed a reservoir of brine there, researchers used a robot called IceMole (which, quite coincidentally, we just wrote about). IceMole melts and drills its way through ice to sample whatever lies beneath—a skill scientists hope will help us sniff out life on icy worlds like Europa, where microbe-filled oceans might flow under thick layers of ice. Blood Falls makes a perfect testing ground for such probe, and in this case IceMole’s trial run had the added benefit of confirming salty, liquid water right where Badgeley and her colleagues expected to find it.

Note: Aliens? Climate change? “Blood?” This story has it all.

Blood Falls has spilled a lot of its secrets at this point. Salty, rusty brine sits under the glacier, staying warm thanks to some counter-intuitive chemistry. Crevasses open up at the glacier’s base, allowing pressurized brine to shoot upward. If a surface crack happens to open up and intersect with these cracks below, the blood-colored liquid has a path to ooze right on out into the open.

But while there might not be much mystery left to the falls, they still have a lot to teach us: for starters, there’s the whole perfect-analogue-for-how-alien-microbes-might-exist-on-frigid-unforgiving-moons thing. But there are also implications closer to home.

“Previously, we treated most glaciers below freezing temperatures as ones that can’t have water,” Badgeley explained. “But if they can have water beneath or inside them—and Taylor Glacier suggests that brine and even fresh water might be able to flow inside glaciers this cold—that can affect how they move.”

Projections of glacier movement are getting more important all the time. As the world warms up due to climate change, glaciers and ice sheets represent massive repositories of potentially-melting-ice—so their behavior can dictate how quickly the sea level rises.

“It’s really important to understand how much and how fast glaciers and ice sheets will change in changing climates,” Badgeley said. And as temperatures get warmer, more glaciers might end up juuuuuust warm enough to allow for this same phenomenon to occur. “This could have more of an effect on more glaciers as the climate continues to change,” she said. “But even in the very current context, there may be glaciers we’ve said were too cold to have water that have been modeled without it. We may need to go back and investigate those more to account for that.”

There you have it, folks. Antarctica’s Blood Falls have shed their last veil of mystery in service of better alien-hunting space robots and sea level rise models. That seems like a pretty fair trade. And even if we know what it is and how it got there, blood-like liquid oozing from a glacier will never stop being delightfully creepy.