They may use massive magnetic maps to navigate 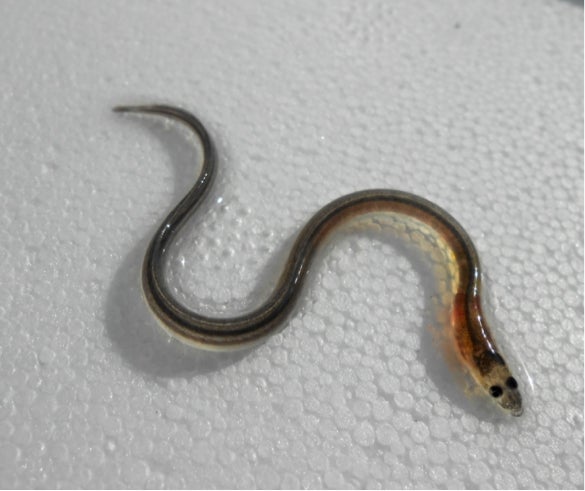 One of the juvenile eels used in the study. Eels of this age are known as glass eels. Putnam et al.
SHARE

When you’re on a long road trip, there are a few things you need: good music, gas money, and a navigator you trust with your life.

A good sense of direction is important in nature too. European eels hatch in the Sargasso Sea, then make a 3,728 mile trek to Europe. But how do they manage to find their way through the ocean?

“I was kind of fascinated by this incredible journey that the eels undertake,” says Lewis Naisbett-Jones, a marine biologist. “From a navigational perspective that’s quite a challenge.”

In a study published in Current Biology, Naisbett-Jones and colleagues found that the young eels might find their way by using the magnetic field of the Earth as a GPS—using it to figure out what their position is, and correcting course accordingly.

For a long time, many eel researchers thought that that young eels reach their destination by floating until they get to a current like the Gulf Stream that carries them to their new home.

In this case, the researchers used eels that were juveniles—about 2 years old—to see how the magnetic field would affect them in experimental situations.

As Ryan Mandelbaum at Gizmodo extensively reports, the decision to use juvenile eels (as opposed to newborn hatchlings) in the study is controversial within the eel-migration community, which is still hotly debating whether or not newborn eels have the same magnetic senses as a ‘teen’ eel that has developed more. The eels also went through the experiments described in the paper in freshwater, as opposed to saltwater, like they might experience in the ocean.

“We weren’t testing their responses to saltwater or freshwater. We were asking a magnetic question,” NOAA scientist and study author Nathan Putman told Gizmodo.

The magnetic question involves looking at how animals can navigate the globe without our human navigational crutches of printed or digital maps, compasses, and GPS. “In principle, the way animals can gain positional or directional information from the Earth’s magnetic field is because it varies in a predictable manner across the surface of the Earth.” Naisbett-Jones says.

The strength of the magnetic field increases as you go towards the poles, and the angle at which it intersects the Earth’s surface varies predictably too, becoming more parallel near the equator and more perpendicular near the poles. By using those two variations, animals like Chinook salmon and Loggerhead turtles can travel long distances. Now, it appears that European eels do the same thing.

“It might not be a map in the sense that we’d think of a map, but it gives them positional information that helps them work out where they are and where they’re going, in relation to where they want to go,” Naisbett-Jones says.

Naisbett-Jones and other researchers don’t know yet how the eels manage to build their magnetic map, but were able to show that they have one, by putting young eels into an experimental setup where they were exposed to magnetic fields designed to mimic conditions that they were likely to encounter on a journey across the Atlantic. When exposed to the different fields, they changed the direction in which they were swimming, altering their course towards what they presumed was Europe.

In an interesting twist, when scientists looked at computer models that showed where the eels in the experiment were headed if they were in the ocean, the direction that the eels chose wasn’t just designed to get them to Europe—it was designed to get them to Europe quickly. The eels angled themselves towards the Atlantic’s superhighway, the Gulf Stream, even if that took them further away from Europe initially.

The Gulf Stream moves 4 billion cubic feet of water per second at a speed of four miles per hour, which might seem slow. But in the backroads of the ocean, where currents are constantly shifting, the Gulf Stream is an express lane.

Naisbett-Jones hopes to look into whether adults use the same kinds of navigation to get back to their breeding grounds in the Sargasso Sea several years later, near the end of the eels’ life. And it is very likely that other researchers will want to do similar experiments on eels in other life stages, like when they are in their larval, or newborn stages.

That’s not the only mystery that researchers have yet to solve about eels. Though humans in Europe have wondered about where eels come from since Aristotle proposed they popped out of earthworms, it wasn’t until the 1920’s that scientists figured out that eels bred in the Sargasso Sea. To this day, the precise spawning grounds are unknown, and no eel eggs have been collected in the wild. The migratory and breeding patterns of the European eel’s counterparts, the American eels—which also venture out to the Sargasso Sea—remain equally mysterious.

“I think they get a bad name for themselves because they’re slippery and snakelike,” Naisbett-Jones says. “But there are a lot of fascinating aspects of their life history that remain to be discovered.”