Yo-ho-ho and a melting glacier 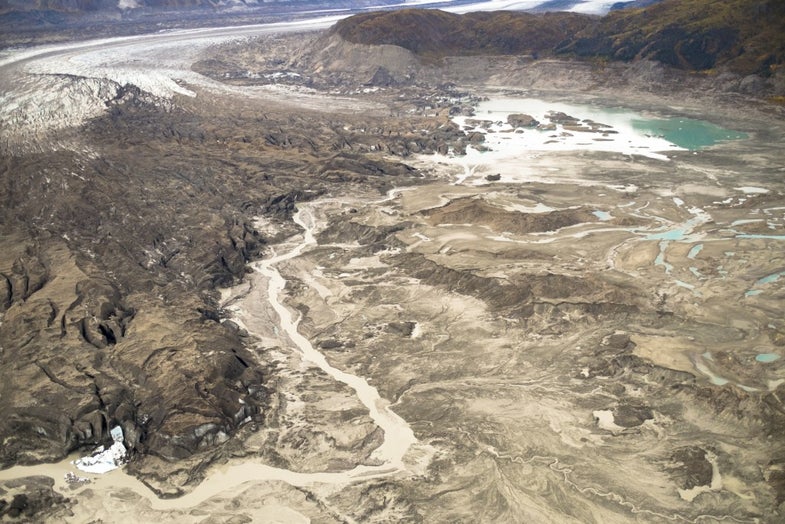 A river in Canada just became a victim of piracy. River piracy.

Yes, one river straight-up stole another river’s water, with a swashbuckling assist from a melting glacier and the unique landscape of the area deep in the Yukon.

In a paper published in Nature Geoscience geomorphologists describe how the Slims river—which normally flows north—was abruptly cut off from its water supply. Now all that water feeds a totally different river—the Kaskawulsh—which flows south.

The researchers didn’t expect to observe a case of river piracy when they went to investigate the area.

“Our goal was to look at how this glacial river [the Slims] adjusts over the course of a year,” says study co-author Dan Shugar. “We certainly didn’t expect it to be totally gone.”

But when Shugar and his colleagues went into the field, that’s exactly what they found. Where the Slims river once flowed, only a shallow lake remained.

Shugar and his co-authors decided to figure out why, so they headed to the river’s source, the Kaskawulsh glacier. As the massive sheet melts, it feeds huge rivers like the Slims and the Kaskawulsh, which join up with even longer rivers. But it wasn’t feeding the Slims anymore.

River piracy—which ranks among the coolest technical terms in the world—happens when water from one river or stream gets co-opted by another river. Usually, it’s seen in the geologic record, as a river carves a different path through soil and stones, but not in real-time. This particular instance of river piracy is fairly unique. It only happened because the glacier which fed the rivers was located in just the right place.

The glacier sits directly on the border between the two drainage basins, which is why it was able to supply water to both rivers for so long. But now, the glacier had retreated, melting in the face of climate change. In it’s smaller shape, it occupies a slightly different footprint in the mountains, and meltwater that was once divided equitably is now primarily diverted to the Kaskawulsh river instead.

Specifically, a lake right at the toe of the glacier, Slims lake, was able to melt its way through the ice of the glacier towards the Kaskawulsh river basin. That issued a death sentence for the Sims river. “It was beheaded, if you will” Shugar says.

And there’s no coming back from a beheading.

“For the Slims lake to re-establish a hydrologic connection with the Slims river would require the glacier to advance, and that’s unlikely to happen in the current climate,” Shugar says.

Now the Slims river will have to cope with much-reduced flows, while the white waters of the Kaskawulsh river will be stronger as both river systems try to adjust to the new normal.

Shugar says that this sudden change in river flows can be directly linked to human-caused climate change. The melting of these glaciers, Shugar says, is happening much faster than can be explained by natural causes.

“Climate change is happening. And it’s not just happening over there, in some other place. It’s happening here in North America, and some of the consequences can be very rapid and might not always be what we were expecting,” Shugar says.