Aliens are probably out there, according to Winston Churchill

A newly-investigated essay from 1939 reveals Churchill's thoughts on E.T. 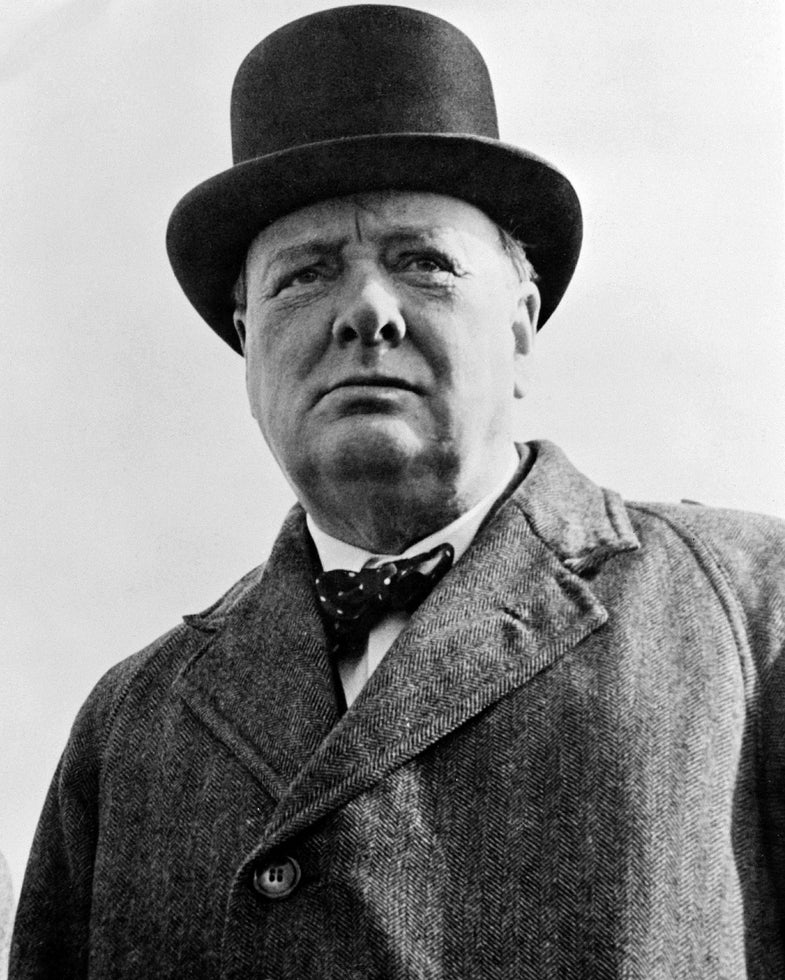 In 1939, the year World War II broke out, Winston Churchill was thinking about aliens.

Although the looming Nazi threat surely commanded most of Churchill’s attention, the renowned statesman still found time to formally ponder one of humanity’s greatest mysteries in the aptly titled essay, “Are We Alone in the Universe?” A summary of this 11-page document, published Wednesday in the journal Nature, shows that Churchill developed advanced cosmic musings that remain relevant to astrobiological research today. Called the British Bulldog for his bold, determined character, Churchill wasn’t hesitant share his suspicions about the possibility of aliens—perhaps even smarter than us.

The essay arrived at the National Churchill Museum in Fulton, MO., in the 1980s, but it hadn’t been thoroughly examined until recently. The museum’s director presented Mario Livio, an astrophysicist who wrote the commentary for Nature, with the curious document.

“I was stunned,” says Livio. “Even though some of the details weren’t right, the logic and entire reasoning is very, very modern.” For instance, Livio explains, “he defines the habitable zone,” commonly known as the “Goldilocks region”—that special area around a star that is neither too hot nor too cold, but just the right temperature for liquid water to exist. And, as Churchill notes, “all living things of the type we know require water.”

Today, NASA is especially keen on searching for life on water-filled worlds. The space agency plans to (gently) drop a robot on Jupiter’s icy moon Europa in the 2030s, a place that may hold a salty sea over twice the volume of Earth’s beneath a thick, frozen crust. NASA intends to bore into the ice, with the explicit purpose of looking for complex, ordered molecules—the signatures of life—preserved in Europa’s crust.

Like any good extraterrestrial-thinker, Churchill also thought that our red planetary neighbor might harbor water and, consequently, life. “His conclusions about Mars are still very relevant,” says Kennda Lynch, an astrobiologist at Georgia Tech University who was not involved in writing the Nature commentary.

Mars’ Rovers have identified dried up lakes on the planet’s surface, and this is precisely the place Lynch thinks we should look for evidence of past Martian life. Here on Earth, Lynch studies ancient lakebeds in extreme environments, similar to those on Mars. She currently researches a vanished ice age lake in Pilot Valley, Utah—an arid, windswept land whose lake sediments are home to microbial life.

Similar conditions might once have existed on Mars. As it transitioned from a warm, wet environment to the frigid desert that we know today, drying lakes could have been the last refuge for Martian life, and remnants of these microscopic creatures might be found there, explains Lynch.

And it seems that NASA agrees. Last week, the agency proposed three potential landing sites for its next car-sized rover, which will begin traversing the Martian surface in 2020. While NASA suspects that all three sites once contained surface water, the Jezero Crater is a dried lakebed.

The curious statesman also pondered life well beyond the red planet, in distant galaxies and nebulae—the remnants of exploded stars and the birthplaces of many more. Statistically, thought Churchill, there are likely lots of planets out there, and many of them might allow life to exist.

Until recently, scientists had little idea how common planets were. Now, with help of the Kepler Space Telescope, scientists have found that planets are common around stars—perhaps one or more planets per star. If you do this math, this could mean “hundreds of billions of planets in our galaxy,” says Sara Walker, an astrobiologist not involved in the essay’s analysis who studies the origins of life at Arizona State University.

However exciting this may sound, Walker is quick to remind the optimistic observer we still have zero evidence that life actually exists on any of these far-off planets.

They may very well be devoid of life. Or they could be teeming with alien bacteria. Or translucent frogs. Or bipedal hominid-like creatures.

“We’re looking for something that we don’t know is out there,” says Walker. “Life could be totally common or not common. Which is why we should go out and look.”

The British Bulldog would agree.