After more than 20 years of preparation, Blue Origin is flying paying customers into space. 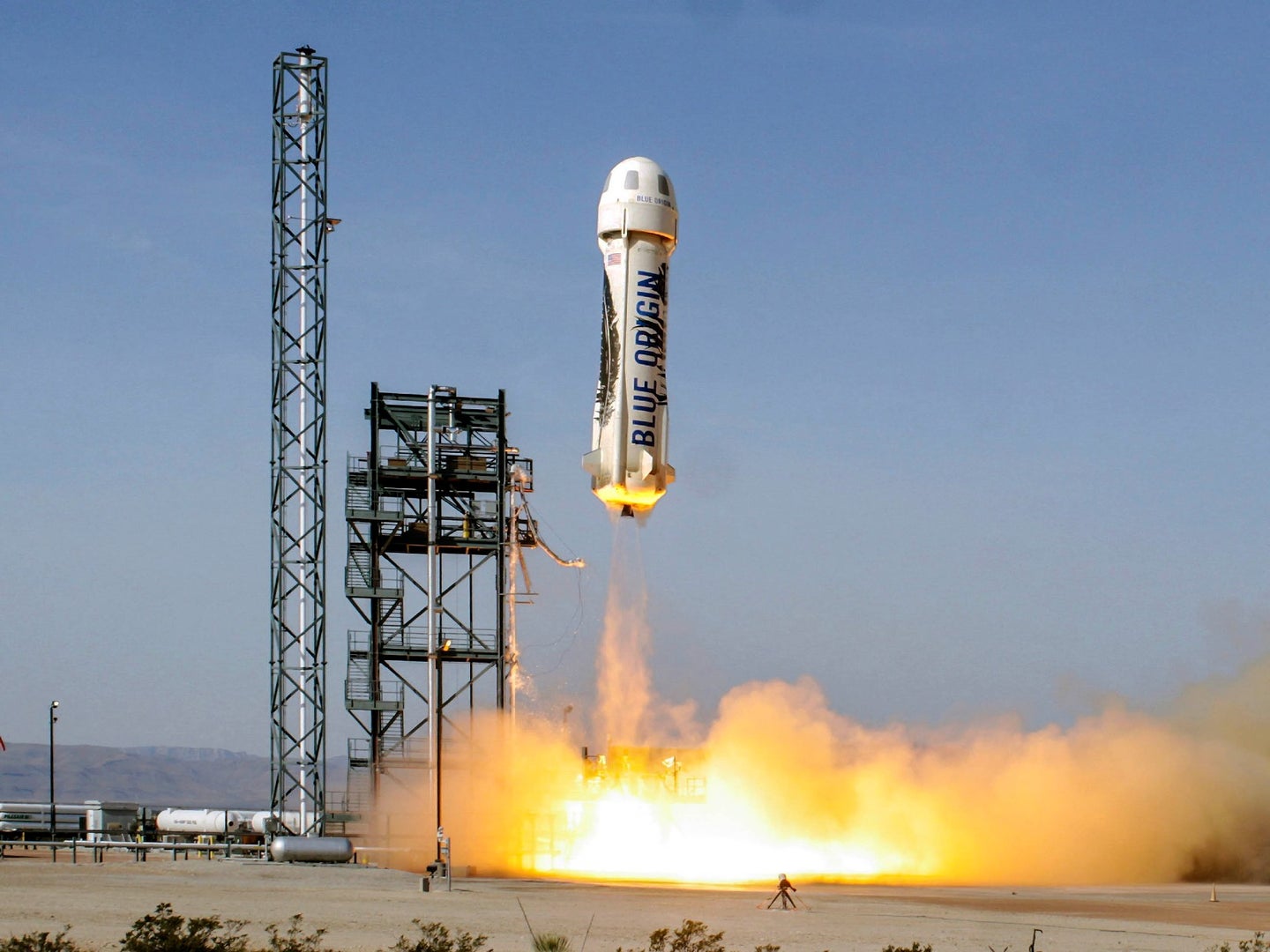 A Blue Origin New Shepard, pictured above during a test flight, carried a paying passenger for the first time today.
SHARE

A Blue Origin New Shepard rocket blasted off from the flat Texas desert this morning. It was Blue Origin’s 16th time launching the New Shepard model and the third time this particular rocket and capsule have risen to the edge of the Earth’s atmosphere. But it was the first time the vehicle carried passengers, including a paying customer.

Fortunately, the flight went according to plan. The New Shepard fired its engines and rose to an altitude of about 66 miles in a matter of minutes, a round capsule detaching from the rocket below along the way. The crew experienced a few minutes of weightlessness as their capsule coasted to a halt and then fell back toward the Earth. After the rocket touched back down on the landing pad, three parachutes erupted from the capsule and hovered above it like gigantic blue and red jellyfish as the vehicle landed in a puff of dust.

Ten minutes and 18 seconds after it began, the experience ended, and Blue Origin personnel opened the capsule and guided the newly minted astronauts to a scrum of family and well-wishers waiting to congratulate them.

“It was picture-perfect,” said Gary Lai, the lead designer of the New Shepard rocket, during the live stream.

Blue Origin’s milestone first human flight carried four astronauts above the Karman line, the internationally recognized (but somewhat contentious) boundary between Earth’s atmosphere and outer space, 62 miles above the surface of the Earth.

The most prominent passenger was Jeff Bezos, the billionaire founder of Amazon and Blue Origin and the world’s richest person. A lifelong space enthusiast, he has personally funded much of Blue Origin’s 20-year endeavor to make human spaceflight more common by selling around $1 billion of Amazon stock annually, according to Reuters.

And Bezos may have been imagining this moment even longer than that. In the first place, he may have been driven to found Amazon to enrich himself enough to bankroll a space endeavor like Blue Origin, according to his high school girlfriend.

“Best day ever,” he said on the live stream after exiting the capsule earlier today.

Bezos also invited his brother, Mark Bezos, a marketing executive and volunteer firefighter, along for the ride. “What a remarkable opportunity, not only to be able to have this opportunity but also to be able to do it with my best friend,” he said in an Instagram video.

The flight made history with its next two passengers, Wally Funk and Oliver Daemen, who became the oldest and youngest astronauts at 82 years old and 18 years old, respectively.

The experience held extra significance for Funk, who trained to become an astronaut with NASA in 1961 with a group of women officially known as the Mercury 13 (and unofficially known as the FLATs: First Lady Astronaut Trainees). NASA did not send the women into space, but Funk has been looking for a ride off this rock ever since, even putting down a deposit with Virgin Galactic in 2010, according to The New York Times. Today she got her wish.

“I’ve been waiting a long time to finally get up there,” Funk said in a press conference after the flight. “We had a great time, the four of us. I want to go again—fast.”

The now-youngest human to visit space was a last-minute addition to the crew. When an as-yet anonymous winner of an auction for the seat, who bid $28 million for the experience, backed out due to “scheduling conflicts,” Daemen, a Dutch student, was bumped up from a later flight. His father, Joes Daemen, a Dutch hedge fund manager, bought the seat from Blue Origin for an unknown price.

The return of space tourism

Space tourism was once an almost routine event. Starting with engineer and entrepreneur Dennis Tito in 2001, a company called Space Adventures brokered almost annual trips to the International Space Station on the Russian Soyuz spacecraft. But the program stopped when the space shuttle program started to wind down and rides to the ISS became too precious to sell—even for the going price of $20 to $40 million.

Now it’s back, and with more ways to leave the planet than before. In addition to Blue Origin, Virgin Galactic flew four employees (and a few plants) into suborbital space, although not quite to the Karman line, on its first fully crewed flight just over a week ago, and will likely send paying customers on the next jaunt. And SpaceX has partnered with Space Adventures with the intention of sending customers into orbit, a significantly harder technical challenge.

Blue Origin, Virgin Galactic, and SpaceX are all owned by billionaires—two of which periodically trade off the title of world’s richest human. All three companies have faced criticism for pursuing what amounts to a tourism experience for the super-rich while the world grapples with climate change, the pandemic, and other challenges.

Bezos, for his part, called such criticisms “largely right,” according to The Guardian. “We have lots of problems here and now on Earth and we need to work on those, and we also need to look to the future, we’ve always done that as a species and as a civilization,” he continued. “We have to do both.”

While Musk dreams of an independent and self-sufficient city on Mars that will make humanity a “multiplanetary” civilization, Bezos has long envisioned a world where millions of humans live and work in large orbital settlements whose economies would be tightly linked with Earth’s—a future one could call “super-planetary.”