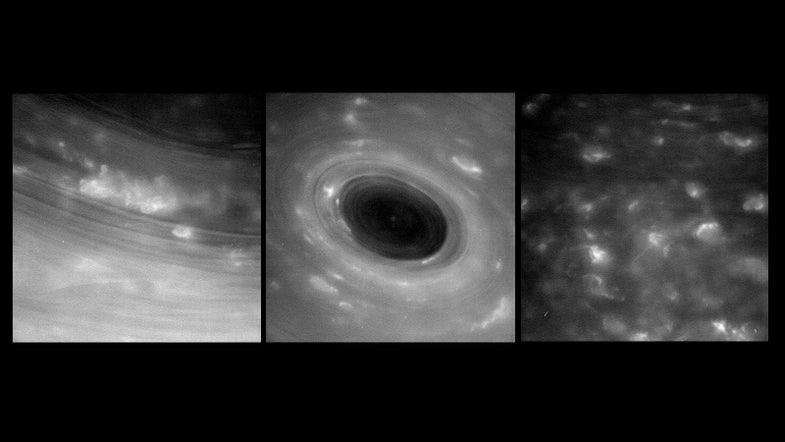 My god, it's full of storms. NASA/JPL-Caltech/Space Science Institute
SHARE

NASA’s 20-year Cassini mission is finally coming to a close. After years of orbiting around the Saturn system and collecting some stellar scientific data, the spacecraft is on a path of certain destruction: on Sunday, the probe officially began the last leg of its mission, which will eventually bring it so close to Saturn that the planet’s gravity will drag it down and burn it to smithereens.

And boy, are those pictures something: they show the atmosphere as it’s never been seen before. See those swirls? Storms. Just, like, endless storms. My god, it’s full of storms. Etc. We’ve pulled a few for you to look at, but you can check them all out over at NASA’s raw image gallery.

Every single one of these images is sciencing the &$!? out of Saturn's atmosphere.

During the dive, Cassini came within 1,900 miles of Saturn’s cloud tops (closer than it had ever gone before, natch) and within just 200 miles of the innermost edge of the planet’s rings. NASA scientists were fairly certain that only tiny ring particles—smoke, essentially—would exist in that part of the gap. But at speeds of 77,000 mph, Cassini still could have damaged its electronics had it collided with one of these minute fragments. That’s why the spacecraft was briefly out of touch with NASA—they maneuvered its antenna dish to serve as a makeshift shield, so it wasn’t properly positioned for communication with Earth.

“No spacecraft has ever been this close to Saturn before. We could only rely on predictions, based on our experience with Saturn’s other rings, of what we thought this gap between the rings and Saturn would be like,” Cassini Project Manager Earl Maize said in a statement. “I am delighted to report that Cassini shot through the gap just as we planned and has come out the other side in excellent shape.”

The dive has already given us unprecedented photos of Saturn’s atmosphere, but there’s a lot more where that came from. Scientists are still receiving data from the first dive, and it could take time to glean valuable insight from it. And these dives will continue pretty much weekly until September: the next takes place on May 2, and another 20 will follow after that.