Bricks made from fake Martian soil are surprisingly strong

But can they build our future outpost on the red planet? 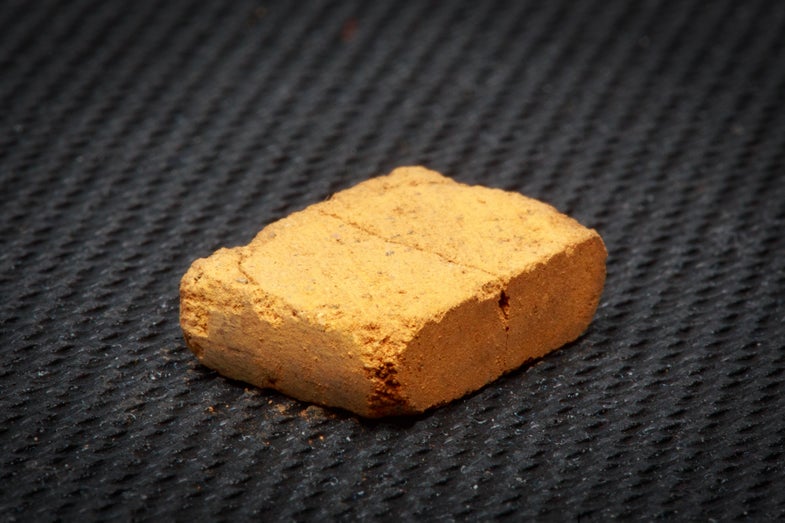 If you think building a house on Earth is hard, try building one on Mars. Every pound of material that we ship to the red planet will cost thousands of dollars, so scientists want to construct our future martian colonies out of locally sourced materials—namely, martian dirt. But that’s more difficult than it sounds.

Mars is cold, which makes 3D printing with wet martian concrete a challenge. We could melt the regolith into lava and pour it into molds, or melt it with lasers, but both of those methods would take a lot of energy. We could try to make the dirt stick together with polymers, but then we’d spend a lot of money shipping polymers to Mars.

A new strategy, proposed in Nature’s Scientific Reports, is appealing in its simplicity: what if we just smoosh the Martian soil into super strong bricks? Researchers at the University of California at San Diego tried just that. Using nothing but a piston press and some soil that simulates the properties of martian dirt, mechanical engineer Yu Qiao and his colleagues formed nickel-sized bricks that are stronger than steel-reinforced concrete.

The team accidentally discovered this unique property. At first they were experimenting with making martian bricks using polymer binders. To cut down on the hypothetical trips between Earth and Mars, they gradually lowered the amount of binder in their samples to see what was the lowest amount needed. “As we reduced the binder content to 0 and it still had some strength,” says Qiao, “we realized that there is something interesting about the material itself.”

When it’s compressed using about as much force as a swinging hammer, the iron oxide particles in the soil simulant—those are the particles that give Mars its characteristic red color—seem to bond together, which is what makes make the brick surprisingly strong.

Philip Metzger, a planetary physicist who studies martian soil mechanics at the University of Central Florida, says the results are interesting, but he cautions that real Martian soil might behave differently.

“That is also our worry—everyone’s worry,” says Qiao.

The simulant he used was developed by NASA, and is considered one of the best Mars soil simulants. But its composition varies from what we’ve seen on Mars—for example, the simulant has about three times as much aluminum oxide, and six times as much titanium oxide as the martian regolith. And it comes from rainy Hawaii, where the weathering processes that affect the grain size and the minerals are significantly different from our dry, icy neighbor. Or in other words, says Metzger, “It looks like Mars, but there is no guarantee that it acts like Mars.”

Ideally, future spacecraft will bring back real soil from the red planet some day so scientists can learn all about it and test its properties, but no such mission is on the books yet. Until then, or until they can send a brick-making robot to Mars, the best that Qiao and his team can do is experiment with different chemical compositions and grain sizes and shapes. “This will be a continued effort,” says Qiao.

And there’s another potential limitation, says Metzger: the iron oxides that bind the bricks together are only found in a thin layer across much of Mars’ surface, which would make it hard to efficiently collect enough material to build a human shelter in most places. There are some places where the red dust piles up to hundreds of feet deep, and this brick-making strategy might be a very good option there.

Metzger (who has worked extensively with NASA) says that while the space agency is more likely to invest in a technology that can be used anywhere on the planet, and one that they’re sure would work on Mars, the UCSD team’s work might still find a use on the Martian surface.

“This might not be good enough for NASA, since it limits the location of an outpost,” says Metzger, “but for Elon Musk’s Mars colony it might be perfect.”