If Sierra Nevada can’t build its vehicle, no one else can. 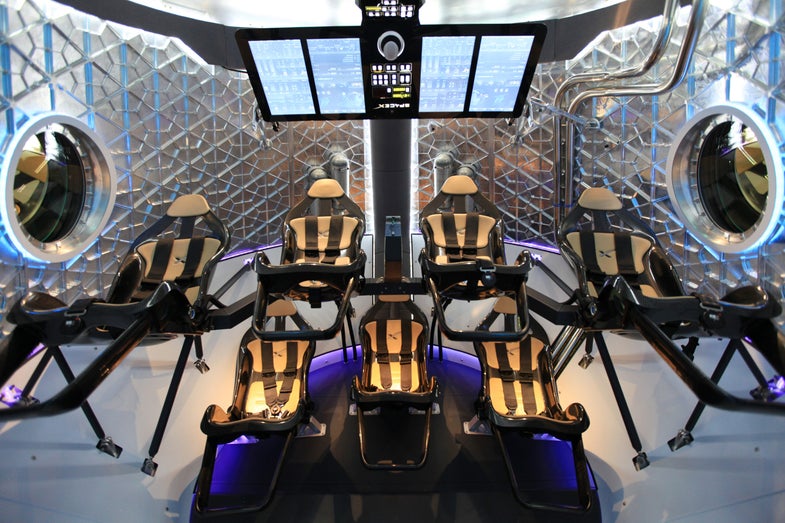 A look through the open hatch of SpaceX's Dragon V2 capsule, one of two designs chosen for NASA's Commercial Crew Transportation Capability program. Both Boeing and SpaceX have been told to halt production of their space taxi designs until a protest filed by the Sierra Nevada Corporation has been resolved. NASA
SHARE

The Sierra Nevada Corporation (SNC) isn’t going down without a fight – and it looks like they’re taking their competitors down with them. Both SpaceX and Boeing have been told to halt production of their NASA-funded space taxis until the space agency resolves a legal protest issued by SNC.

Last month, NASA finally announced the winners of its Commercial Crew Transportation Capability (CCtCap) program, an initiative aimed at fostering the development of private spaceflight. The two winning companies, SpaceX and Boeing, received contracts with NASA and a combined sum of $6.8 billion to build and operate their own space taxis, which would ferry astronauts to and from the International Space Station starting in 2017.

In essence, SNC was the loser of that competition. Their Dream Chaser space taxi was the other major contender for the contract, and the vehicle was thought by some to be on par with SpaceX’s Dragon V2 capsule and Boeing’s CST-100. In a press release, the company claimed that Dream Chaser was actually equal to its competition in technical requirements, and it could be built and operated at a cheaper cost than one of the other company’s spacecraft. (They didn’t specify whom.)

Unfortunately, SpaceX and Boeing could be waiting a while, as a GAO bid protest can take up to 100 days to be resolved.

So SNC filed a formal bid protest with the Government Accountability Office, hoping to do a formal review of NASA’s selection process for their CCtCap contracts. But until SNC’s protest gets sorted out, it looks like SpaceX and Boeing won’t be developing their space taxis any time soon. According to a report from Spaceflight Now, a spokesperson for NASA says that the legal challenge stops any work that was to be done under the contracts.

“Pursuant to the GAO protest, NASA has instructed Boeing and SpaceX to stop performance of the CCtCap contract,” Stephanie Schierholz, a spokesperson for NASA, tells Spaceflight Now.

Unfortunately, SpaceX and Boeing could be waiting a while, as a GAO bid protest can take up to 100 days to be resolved. So unless NASA and SNC figure out an alternative solution before then, the two companies may be sitting on their hands until January 5, 2015.

We still don’t know the exact criteria NASA used to judge the competing spacecraft designs, but in their original solicitation for CCtCap, the agency stressed that the vehicles must be safe, reliable, and cost effective. According to the GAO, NASA has until October 26 to respond to SNC’s claims, by putting together all the documents that are pertinent to their decision. Theoretically, that will include thorough details of the selection process.

SNC claims this is the first time in its 51-year history that the company has filed a legal challenge to a government award. The protest argues that “NASA’s own Source Selection Statement and debrief indicate that there are serious questions and inconsistencies in the source selection process.”

However, a source familiar with NASA’s decision told the Wall Street Journal that SNC “lagged behind the other two bidders in some technical rankings.”

So buckle up, kids. This spaceship catfight is just getting into full swing. Meanwhile, hopefully the Russians will still let us ride shotgun.