But size isn't everything 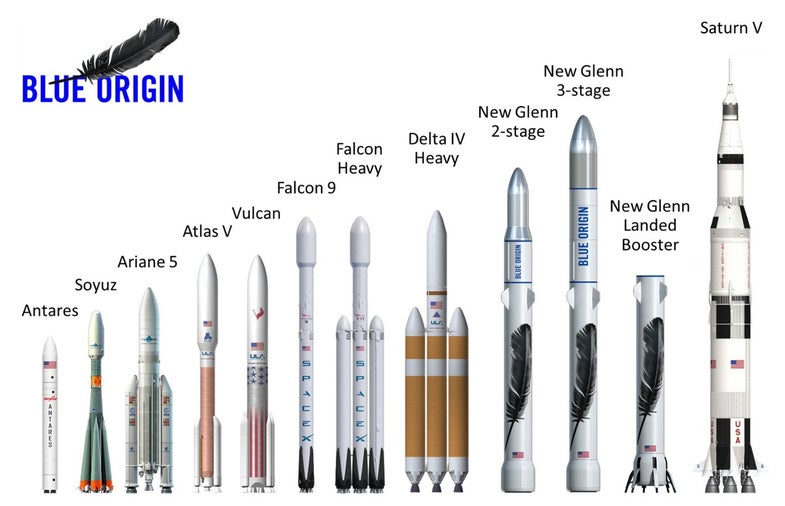 Blue Origin was the first private spaceflight company to launch a rocket into space and then bring it back down for a vertical landing. “Into space” has a bit of a caveat attached, though; the New Shepard rocket crossed the Karman line, 100 kilometers above ground, which arbitrarily divides earth from space. The rocket can’t make it high enough to deliver a payload into orbit the way SpaceX’s Falcon 9 can.

But those caveats could go away in a few years. In an email today, Blue Origin (and Amazon.com) founder Jeff Bezos revealed plans for a new rocket series named New Glenn. Named after the first American to orbit Earth, New Glenn is also destined for orbital space, and Blue Origin wants to launch it before the end of the decade.

From the plans, it looks like New Glenn will be the biggest rocket since the Saturn V. The 2-stage rocket will stand 270 feet tall and 23 feet in diameter, and use 7 BE-4 engines to deliver 3.85 million pounds of thrust at liftoff. The 3-stage New Glenn is even taller at 313 feet.

Nevertheless, having another route into orbit can only be a good thing. Blue Origin says they plan to use New Glenn to launch commercial satellites and humans into orbit, and will perhaps even travel beyond low Earth orbit. And the email teases more exciting developments in the future. Writes Bezos: