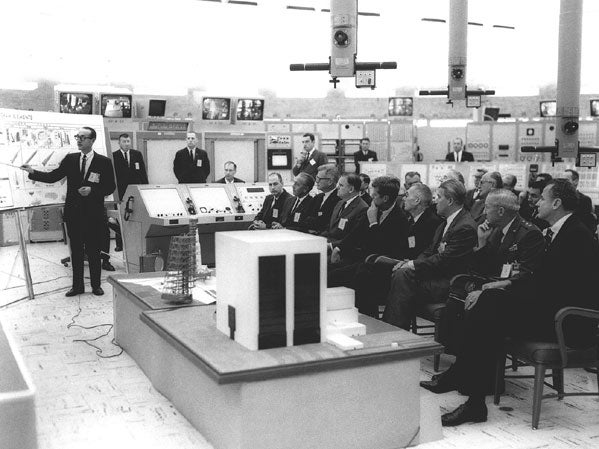 During the State of the Union on Tuesday evening, President Barack Obama referenced the nascent industry of private space travel, and how that sector could “reignite” America’s “spirit of innovation.”

The sheer wonderment with space has always existed with Amy Shira Teitel, who has been fascinated with space exploration since she was seven years old and was tasked with a school project on Venus. The Popular Science blogger was able to capitalize on her childhood obsession with Breaking the Chains of Gravity: The Story of Spaceflight Before NASA, a supremely interesting and well-researched look at how the origins of NASA begin well before John F. Kennedy essentially admonished America’s scientists to try harder.

We spoke with Teitel about her desire to document NASA’s unique backstory, and how the future of the country’s space exploration will progress.

So what led to Breaking the Chains of Gravity?

Well, the impetus to write a book came from doing my masters on the Gemini paraglider wing, which isn’t in the book, but then I thought about chronicling the history of space that we don’t know about. This is something that has been a lifelong fascination for me. When I was 7, I had a research project on Venus, and was reading a little kid space book that had a cartoon of two astronauts standing on the Apollo lunar module. I’m from Canada, and no one talks about NASA here on a daily basis. I couldn’t believe that cartoon — why did they do this? That inspired my master’s thesis, to tell these untold stories.

So this book has been a longtime coming?

Yes. It’s a childhood fascination meets love of writing outside the academic sphere. This book is fully narrative because I hate dry academic writing. I write for the people who aren’t space buffs and who aren’t obsessed with this stuff.

Were there some surprising takeaways when you started doing your research?

What really shocked me, and continues to impress me, was how quickly the technology developed. Twenty years after men first started flying — airplanes developed so quickly — once they got off the ground, there was a massive shift to metal bodies. Rocketry being so much more dangerous and difficult, also developed almost as quickly in those early years. And then rockets grew so much during World War II, similar to the growth of space flights during the Cold War. There was a confluence of wars that pushed the technology into being. It happened really fast, and it happened from so many different pockets. It is mind boggling how many people picked up the technology and ran with it in the early years, and really tried to push.

Since that surge, though, it seems the space exploration has stalled. From looking in the archives, do you have any theories to why?

I don’t know the details of SpaceX, or any of those other companies, but it seems like a twofold answer. First, there isn’t a national enemy pushing the US or NASA to take major leaps and devote the funding to find new propulsion methods. We are stuck with chemical propulsion, which has its limitations. When you are locked into the tech, and don’t have the drive to go beyond that tech and are still using heritage technology from the 1950s, it’s difficult.

It also seems the national conscious isn’t fascinated with space exploration like the Baby Boomer generation was.

I would love to know that is. I want to say there is a weird cultural shift. This generation seems much less interested in understanding the world around them. We are very introverted now. I live on the Internet and everything I see is social media, which is a selfish form of expression. The huge amount of new technology after the second World War captured so much of the world’s attention that the newest cell phone might not now because we already have this technology. We can improve upon televisions and other technological accessories we have, but it isn’t life changing, whereas the first ever TV changed the ways we relate to our family on a daily basis.

The space race was so easy to sell that it got a whole generation behind it, who were supremely fascinated by the science behind it.

Was it difficult putting the book together as opposed to say, your PopSci blog?

Not necessarily. I started with researching overall program histories, and NASA has these great chronologies of programs that help you with key dates. And then I took a few weeks to dig into a missing scene while gradually adding in the pieces. I would extract what needed to be there while maintaining the narrative of the story.

Thankfully NASA had done a lot of my work in getting the oral history from the key people involved, and these memories were my sources for their own words and thoughts. I would have loved to interview people for this, but everyone I focused on has already passed.

Do you think though that we are entering another golden era of exploration?

I am sketical. I love the idea but I am not clear what the golden age is supposed to look like. We are in a different era in terms of having commercial partners that can do things NASA can’t, which is accountable to taxpayers and can’t take the same risk, like killing people. Elon Musk can keep going if someone dies. I don’t know what qualifies as the golden era, but for me, it means humans leaving the Earth and seeing the moon or other planets up close. The first time we figured out how to live in space at all. It’s hard to say golden era because of how much we know now versus knowing nothing when NASA opened.

Was there a figure that, after all your research, surprised you the most?

One person I knew about but hadn’t dug into was Hugh Dryden. He is a name that no one knows — he was the first deputy administrator of NASA, and died in 1965 — and was by all accounts years ahead of his time in terms of thinking about technology and aviation. He was trying to understand the problems of compressibility when no one knew what that was. Similar, he was trying to understand supersonic flight in the 1930s when planes were maybe going 30 miles per hour.

He was also the first ever director of NASA’s pre-organization — NACA — and being in that position of leadership, he pushed the organization where it needed to be when NASA became a thing. To have someone with that foresight, who pushed supersonic flight, and missiles with people on them, was incredible.

Over the course of writing this book, or the blog, is there a frequent question you get?

That’s easy to answer — why haven’t we gone to Mars yet? I tell them, ‘Take the Apollo program and everything leading up to the Moon landing out of the context of war.’ It was such a powerful force of making NASA’s development happen. When have we seen a major technological development happen outside the case of war? In the case of Mars, there has to be a competition. If China says that it will put a man on Mars in the next five years, NASA will probably flip out and try to match it.