When Elon Musk And Jeff Bezos Clash Over Reusable Rockets, We All Win 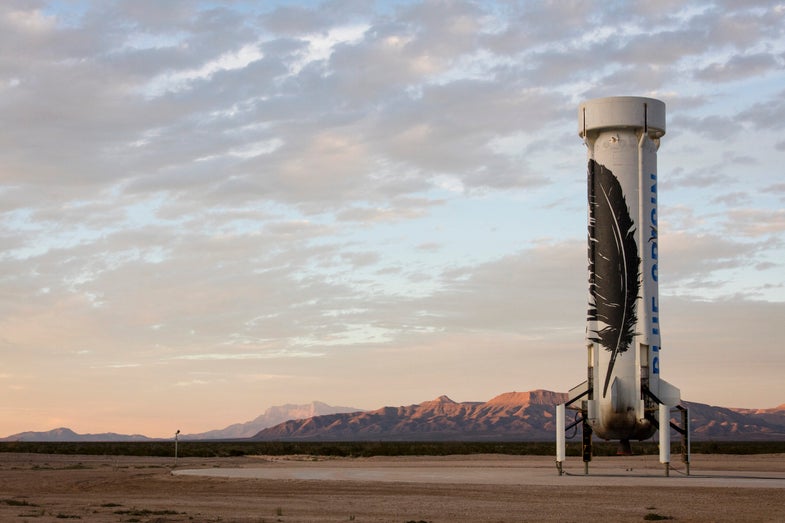 This week, a private spaceflight company did something extraordinary. Blue Origin, an aerospace company founded by Amazon’s Jeff Bezos, sent a rocket up to the lower reaches of space and then landed it back on Earth in the upright position. Nailed it!

The landing is a big step toward rockets that spaceflight companies can reuse, instead of just letting them fall into the ocean. That could translate into savings for companies who do business in space, as well as the rest of us who hope to make it out there someday.

Not everyone is overjoyed by Blue Origin’s success. Elon Musk, CEO of SpaceX, which hasn’t quite succeeded in making a similar landing, clearly a little sore about having another company steal his thunder.

Bezos responded by pointing out in a press call that, actually, the first stage rocket booster that SpaceX is trying to land and reuse only goes to suborbital space as well. “The hardest part of vertical landing and reusability is probably the final landing segment which is the same for both boosters,” said Bezos. In addition, SpaceX’s booster burns fuel in space to slow its reentry, whereas New Shephard does not, meaning it might actually have a tougher landing, says Bezos.

SpaceX’s Grasshopper rocket reached heights of up to 744 meters before achieving a soft landing, but that seems less impressive when compared to Blue Origin’s 100 kilometer flight.

Mostly the bickering is providing amusement on social media.

The proverbial pissing contest between these two hard-driving, never-take-no-for-an-answer entrepreneurs isn’t a necessarily a bad thing. If it hadn’t been for the Cold War–and the fact that America was losing it–mankind might not ever have felt compelled to set foot on the Moon.

With NASA taking a time-out from launching rockets (the agency is working on rockets to carry humans into deeper space, but is running up against the budgetary constraints set by Congress), a fledgling private industry has time to grow. A little extra competition could help these companies set more ambitious goals, improve efficiency, and–maybe, someday far in the future–make spaceflight affordable for all.

The path forward will not be easy for either company (as well as their other rivals), but the fierce competitiveness and exacting standards of these two leaders will likely prove to be helpful in the new, commercial race to space.