Why Did NASA Still Use Pure Oxygen After the Apollo 1 Fire? 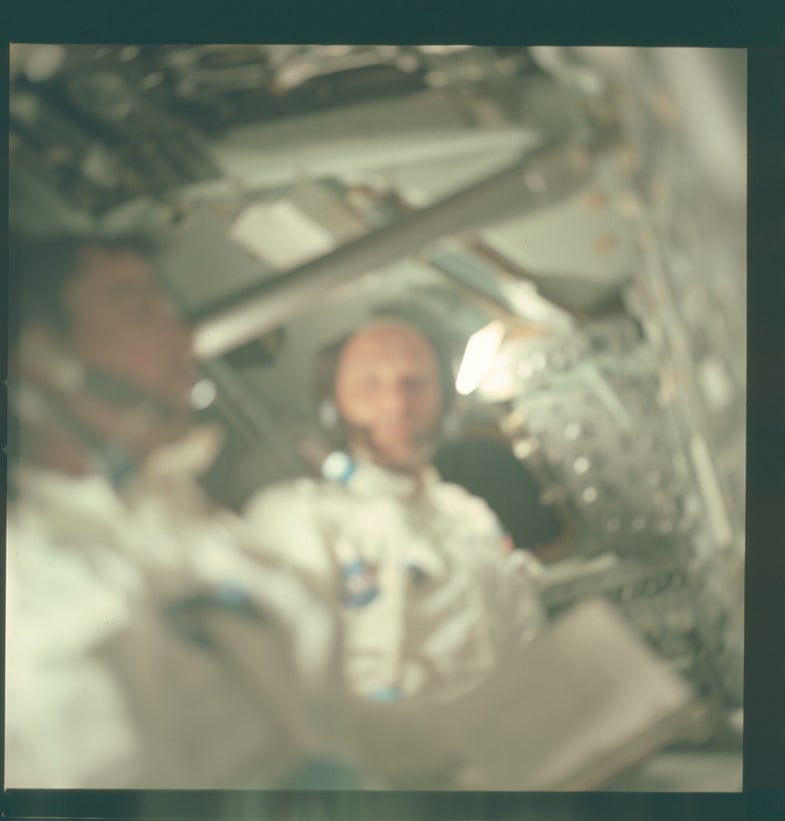 Two fuzzy astronauts on board Apollo 10, which went to the Moon but didn't land. May, 1969. NASA
SHARE 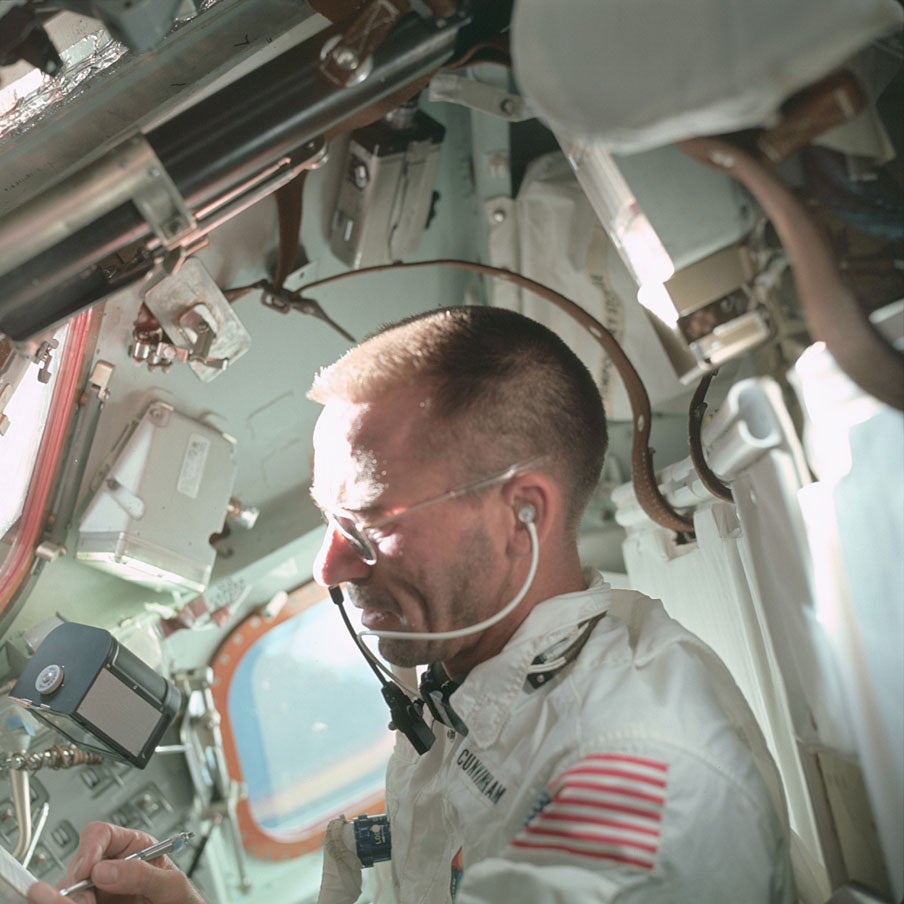 Walt Cunningham in the pure oxygen environment on board Apollo 7.

Not long after President Kennedy promised America the Moon on May 25, 1961, NASA released a Request for Proposals to industry contractors hoping to build the spacecraft that would take men to the Moon. Included in the proposal was the provision that the spacecraft environment be a mixed gas one, an oxygen-nitrogen atmosphere akin to the air we breathe. In November of 1961, NASA awarded North American Aviation the coveted Apollo contract, and this winning proposal included this mixed gas environment.

But a year later NASA changed its mind. As the pieces of Apollo were starting to take shape, weight was fast becoming an issue. Weight is a huge consideration for any mission leaving the Earth. A heavier spacecraft needs a bigger booster to get it off the ground, but if that booster is too big it won’t be able to lift itself off the ground, too. In the case of Apollo, the first stage of the Saturn V rocket had to lift itself and everything on top of it — the second and third stages as well as the command-service and lunar modules — off the ground. Any additional weight at the top of the stack would demand more pounds of thrust at the bottom to get the whole thing on its way to the Moon. 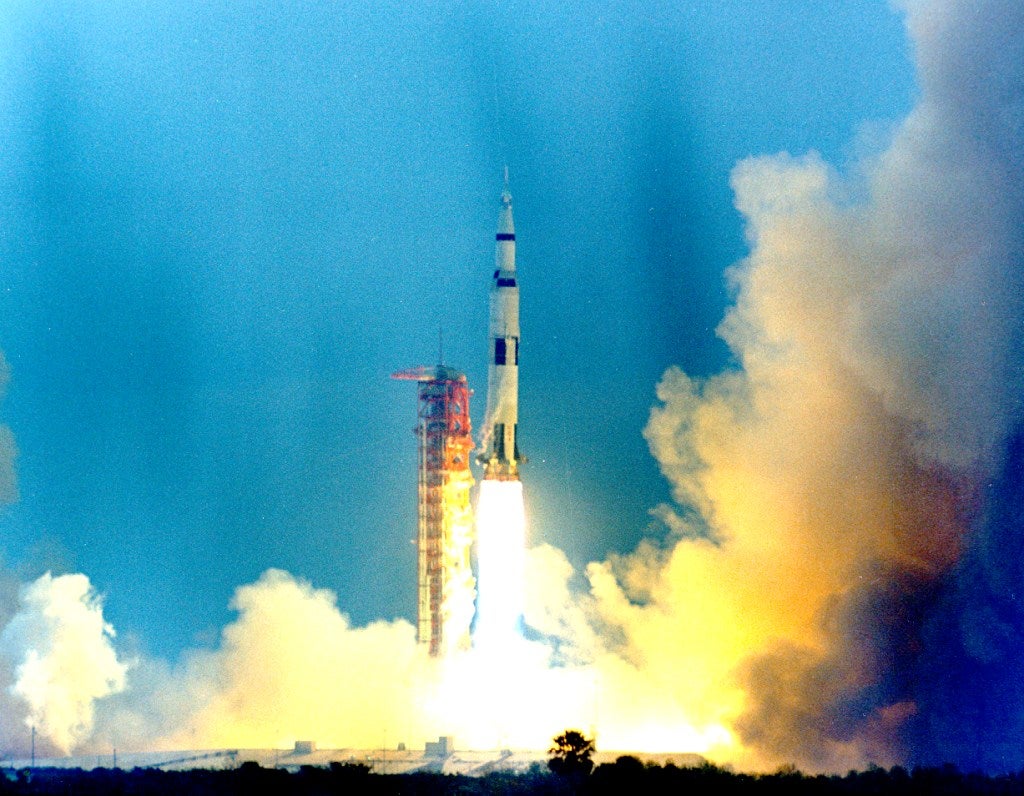 The massive Saturn V takes the Apollo 9 command-service and lunar modules into orbit… you can barely see them in this picture the rocket it so much bigger than its payload!

NASA realized that the tanks needed to hold both oxygen and nitrogen along with the associated hardware and plumbing to deliver the gases into the crew cabin came with a significant weight penalty. Not to mention it was complicated. Managing the dual gas environment meant developing a sophisticated sensing system able to detect and react to minute changes in the gas balance, a system that would add weight. A single gas environment, on the other hand, was much simpler and lighter needing only a sensor to monitor that the cabin was remained properly pressurized. Lighter and simpler trumped heavier and more complicated, and NASA reversed its initial decision. Apollo would go to the Moon using pure oxygen in the crew cabin.

North American wasn’t keen on the change. For the contractor, the simplicity of a single gas system wasn’t worth the risk. North American knew — as did many engineers at NASA — that a spark in a pure oxygen environment could quickly grow into a raging fire. NASA countered by pointing to the pressure onboard the spacecraft. At just five pounds per square inch, the density was so low that even a pure oxygen environment wouldn’t support a fire a trained crew couldn’t handle. Not to mention, by this point in mid-1962, NASA had launched four Mercury missions using pure oxygen in the cabin without incident. Why change something that wasn’t broken? There was no need to further complicate a spacecraft on a complicated lunar mission. 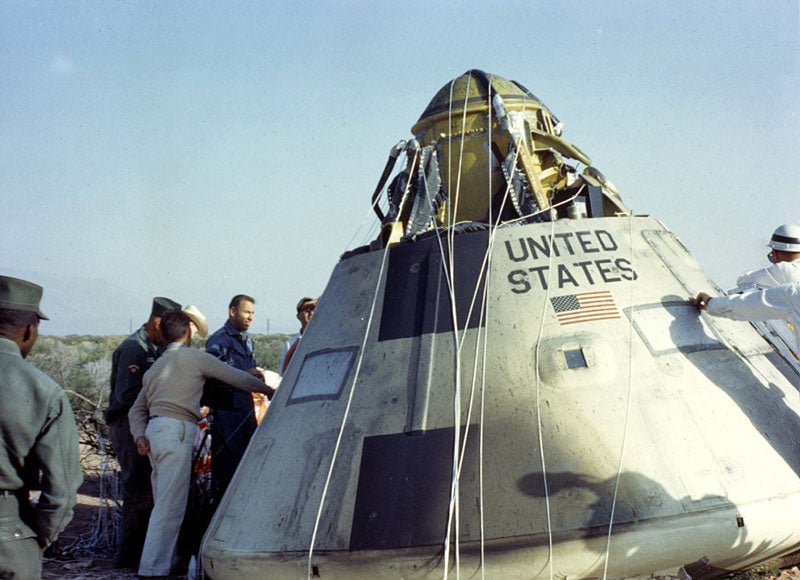 Ultimately, NASA had final say. Director of the Manned Spacecraft Centre Robert Gilruth made the switch from a dual to a single gas environment official with a formal contract change notice signed on August 28, 1962.

North American proceeded according to NASA’s direction, but not without incident. In April of 1966, a fire in the environmental control system of a command module under construction caused significant hardware damage, but this didn’t reopen the question of the crew cabin environment. Much of the damage was attributed to a commercial grade strip heater inside the cabin, and since this wan’t flight hardware the fire was largely dismissed. It did, however, prompt North American to revisit the amount and placement of flammable materials in the spacecraft to ensure no combustible materials were too close to electrical systems. NASA also had North American make design changes to eliminate fire hazards stemming from fluid leaks, overheating lamps, and large areas of exposed fabric and foam.

But these changes were only made in the lunar-capable Block II model of the Apollo spacecraft, not the earlier Block I model that would fly Earth orbital missions. And Apollo 1 was a Block I Earth orbital flight. So not only was Apollo 1’s spacecraft less fire-resistant than later incarnations on the day of the fire, the atmosphere on the day of the fire wasn’t the same low density of pure oxygen it would be in flight. To mimic the five pounds per square inch in space, the cabin was pressurized to 16 psi at sea level; this created the equivalent pressure difference between the spacecraft and the outside environment.

This was the recipe for disaster. During a routine test, a spark ignited all the cabin materials that had been soaking in oxygen for hours. The crew died of smoke inhalation and the spacecraft was destroyed. 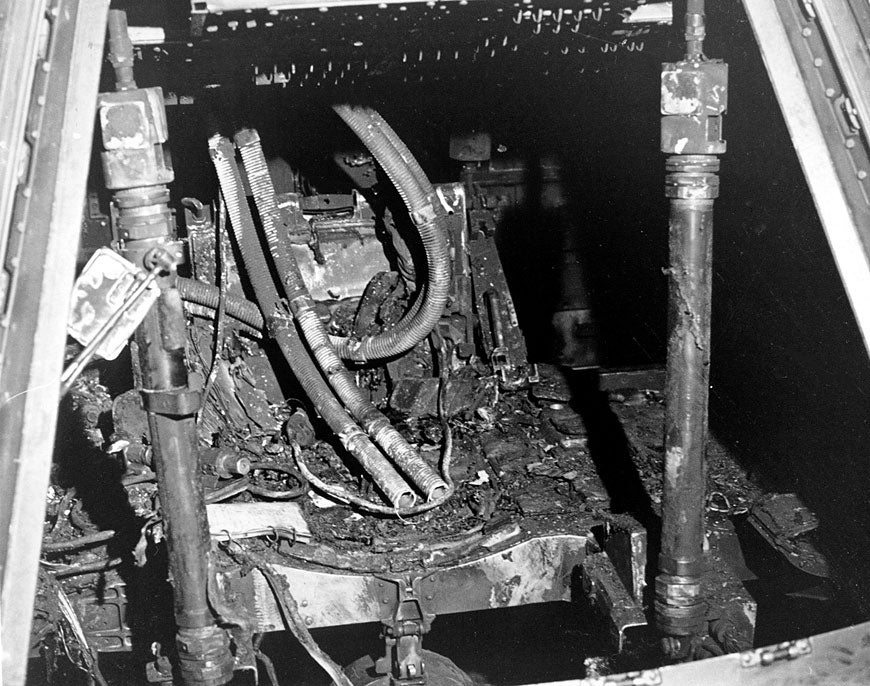 Damage from the Apollo 1 fire

View of the inside of the spacecraft’s charred remains following the fatal fire.

The Apollo 1 accident investigation prompted NASA to revisit the spacecraft’s pure oxygen environment, the benefits of the simpler and lighter single gas system and a low density flight environment remained. The real problem, NASA reasoned, was the high pressure at sea level, something that only happened before launch. And so the proposal was raised by Max Faget, one of the pioneering engineers behind the blunt body capsule spacecraft, that NASA change the only the launch atmosphere of the spacecraft. He suggested replacing pure oxygen with a mixed gas atmosphere, either oxygen-nitrogen or oxygen-helium in a 60:40 ratio. This mixed atmosphere could be bled out during ascent into orbit and replaced with pure oxygen. It would demand only minimal changes to the spacecraft and wouldn’t affect the crew; they would be breathing their own pure oxygen supply at launch as usual.

NASA accepted this proposal on March 14, 1968, and selected nitrogen as the diluting gas there were fewer questions about how onboard systems would interact with nitrogen than helium. 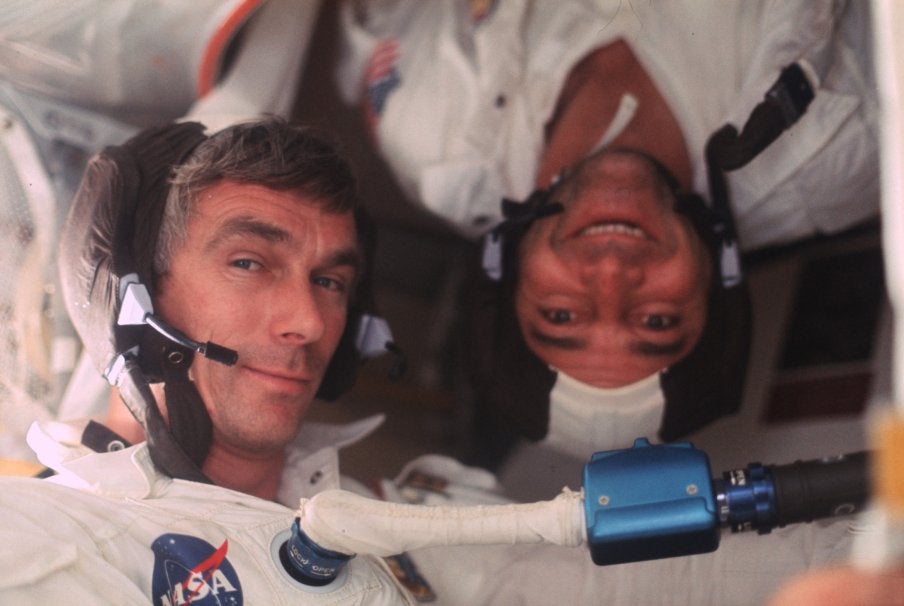 Gene Cernan and Ron Evans during their flight back from the Moon in 1972.

Apollo went to the Moon with pure oxygen without any further serious incidents, and when the program was canceled NASA finally moved away from pure oxygen in space. The space shuttle and International Space Station programs both took a cue from the Russian Soyuz spacecraft, the workhorse that has been flying since the 1960s that has always used a mixed gas environment. All three environments are very air-like with 21 percent oxygen and 79 percent nitrogen at roughly sea level pressure.

Ultimately, NASA’s decision to keep the same pure oxygen environment after the Apollo 1 fire boils down to the need to get to the Moon on schedule. Keeping the onboard systems simple and not adding weight were two ways the agency could ensure Apollo was still ready to fly and make it to the Moon by the end of the 1960s. The change to the launch environment, in a way, made the best of a less-than-ideal arrangement, and also ensured the Apollo 1 astronauts’ deaths helped push the agency forward.

Sources: The Apollo Spacecraft Chronology; Angle of Attack by Mark Gray; this old blog post of mine about the Apollo 1 fire; Chariots for Apollo by Courtney G. Brooks, James M. Grimwood, and Loyd S. Swenson.