From A Risky Spacewalk To The Top of Mount Everest

Retired astronaut Scott Parazynski talks about his life of adventure 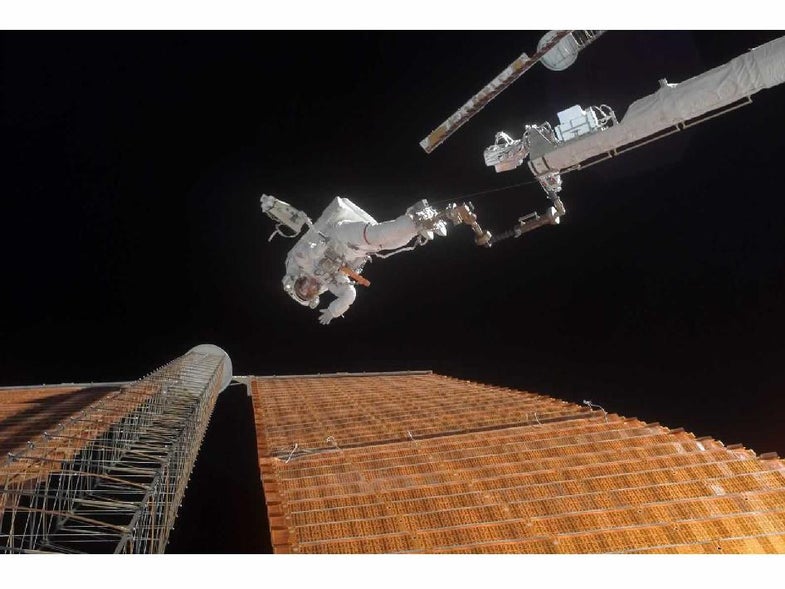 In the new Science Channel show, “Secret Space Escapes,” astronaut Scott Parazynski, M.D., recounts one of the most challenging days of his life: a live, fully energized solar panel needed to be repaired in space, and he risked his life on a 90-foot arm to fix it.

The fully energized panel could have given Parazynski life-threatening electrical shocks out-of-reach of any hospital on Earth. For some, that level of risk would have been a segue to retirement. Not for Parazynski. “Best day on the job ever,” he told me recently, during a phone interview. I could hear him smiling.

Parazynski just seems to be wired differently than many of us. His pursuit of extreme environments seems to know no bounds. In addition to being an astronaut (who has completed five space shuttle missions, seven space walks and spent 57 days in space), Parazynski is also a medical doctor, scuba diver, pilot, speaker and mountain climber—he’s the only astronaut to summit Mount Everest.

He gives his parents and some key life events credit for his adventurous spirit. “It’s hardwired in my blood,” he says.

Growing up, he traveled to Senegal, Lebanon, Iran, Greece and other places before attending Stanford University and Stanford Medical School. His father was a part of NASA’s Apollo program, which explained the travels, and inspired Parazynski’s own interest in testing boundaries. “I grew up in the shadow of the program that took men to the moon in the late ‘60s and early ‘70s. So I had a taste of humanity’s greatest achievement,” he says.

As a kid, he read books about Lewis and Clark, Himalayan expeditions and Jacques Cousteau, which fueled the wanderlust that shaped his medical career: he flew in the STS-95 space shuttle mission in 1998 as astronaut John Glenn’s personal physician, and served as University of Texas Medical Branch’s chief medical officer for the Center for Polar Medical Operations in the Antarctic, screening scientists before their trip and provided them real time medical care using telemedicine from the U.S. (He’s also visited Antarctica twice).

“As I’ve grown older I’m also convinced of the great value of pursuing human performance at extreme, challenging environments. In fact, I think it’s a great catalyst for innovation in health care and other areas,” he says. Parazynski says that by supporting astronauts in the International Space Station as well as crew members at the South Pole, we can learn a great deal about technologies that could be useful closer to home.

When the explorer was growing up, he dreamed of being the first person to set foot on Mars. “I was fortunate enough to be alive when Neil Armstrong first set foot on the moon and I thought it would be really cool to be the Martian equivalent of Neil,” he says. Today, he’s accepted that that likely won’t be the case. But his interest in exploring—and finding life on—other planets has never waned.

“I do believe that there is life elsewhere in the universe, in fact I would imagine there’s quite a bit of intelligent life on distant shores,” he says. He suspects that Mars, Europa, Enceladus and Triton could, in fact, harbor life because they have water and a source of heat.

“In Europa, there’s a very thick, icy crust and then huge water oceans also energized by volcanic activity. Why not send a spacecraft that can bore down through the ice and penetrate the water ocean to see if there’s life existing today?” he asks. “I think that’d be an incredible mission for NASA to take on.” 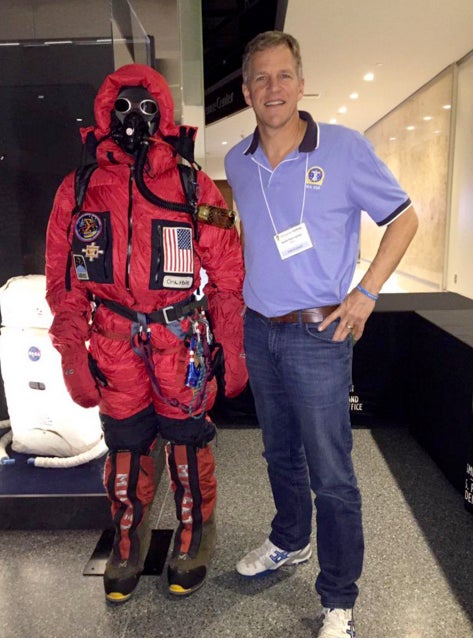 Retired astronaut Scott Parazynski MD shows off his invention, an anti-freezing innovation, in a September 2015 tweet.

When talking about his own experiences in space, Parazynski waxes poetic—particularly when he reflects on viewing the earth from afar.

“Your eyes can see beyond the Earth’s atmosphere and see literally trillions of sources of light in the distance. But your eyes are always drawn back to planet Earth,” he says. “It’s this beautiful blue orb, and you recognize that everyone that you know and love and everything in human history and human future, for the foreseeable future, is down there on planet Earth. And you just feel very, very fortunate,” he says.

In time, he hopes that with companies like Virgin Galactic, Blue Origin and SpaceX, more people will have the privilege of viewing the Earth from a new perspective. That, he suggests, could give men and women a new resolve to be kinder to the earth, and to one another.

“Think about taking the leaders of Palestine and Israel into space together to see their real estate. Think about the industrial enterprises that are polluting our environment today, to get them up to that vantage point and see what’s happening to our planet,” he says. “I think there might be some profound changes.”

To learn more about Scott Parazynski, tune into Katie Linendoll’s interview with him on www.Katie.show. You can follow Katie on Twitter @katielinendoll.