In an exclusive interview, the executive producers of NatGeo's 'Mars' miniseries discuss colonizing the red planet 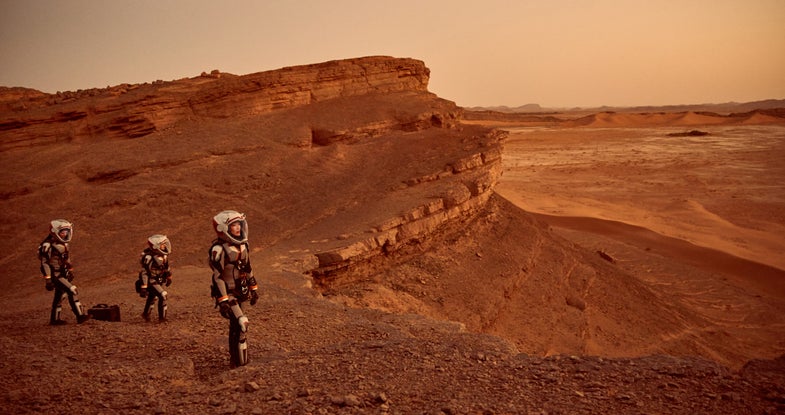 If you liked The Martian and/or love Elon Musk, then National Geographic has a show for you. Half documentary and half dramatization, Mars is a six-part miniseries about colonizing the red planet, and it debuts on November 14 at 9pm Eastern.

The series relies on interviews with hotshots like astronaut Scott Kelly, NASA chief Charles Bolden, science spokesperson Neil deGrasse Tyson, and SpaceX CEO Elon Musk to paint a picture of what the journey to Mars could look like and how we might get there. Although many of those details haven’t been settled in real life, the series makes educated guesses about humanity’s interplanetary future.

Executive producers Ron Howard and Brian Grazer previously worked together on Apollo 13, A Brilliant Mind, and From Earth to the Moon. We caught up with them to chat about why Mars captured their attention, and how it felt to make a documentary about the future instead of the past. An edited transcript follows.

Popular Science: What made you guys interested in doing a Mars series?

Brian Grazer: Basically, Ron and I like space. Everybody likes the feeling of being transported to space. Recently, Justin Wilkes at RadicalMedia [a company that helped produce the series] came to me and said they wanted to do a movie or series about colonizing Mars. I call up Ron and said, ‘What do you think of this?’ And he goes ‘I like it.’ Within 24 hours I had lunch with Peter Rice [the CEO for Fox, which owns Nat Geo], and he just jumped on the idea. It was the fastest pitch and the fastest buy we ever had in our lifetime.

PS: Why do you think that is? Why is Mars such an appealing topic right now?

Ron Howard: There’s a tipping point that’s going on. It’s kind of supercharged by Elon Musk and Jeff Bezos, and to a degree Richard Branson–high profile people who’ve sort of said, ‘Exploration has to happen in one way, shape, or form.’ Elon has been sort of the most dramatic about wanting to go all the way to Mars and make it happen. And NASA and President Obama have completely embraced this and redoubled their efforts to make that a priority. Mars is also very cinematic, and incredibly exotic, and dangerous. Everybody knows that it’s going to be mankind’s greatest challenge, and greatest adventure.

BG: I think the global mass culture is either consciously or unconsciously sensitized to how vulnerable we are here on the planet. And so I think this is sort of primordial to us as human beings. How do we preserve our species in the case of some kind of global catastrophe?

PS: Are you hoping that the series helps to make Mars colonization happen in real life?

BG: I’d like for people to understand what it would be like to transport ourselves to space–what that feels like, the adventure, the discoveries, and its potential outcomes of just having tremendous scientific and geopolitical importance.

RH: My motive is a close cousin to that. This is exciting to deal with–what it would take, what it would be like, what would it mean to go to Mars and colonize? I believe in the imperative to explore, so any project that I can be involved with that celebrates that, and expands people’s imagination around that idea of pushing out, is one of the most positive things that I think I could be involved with. 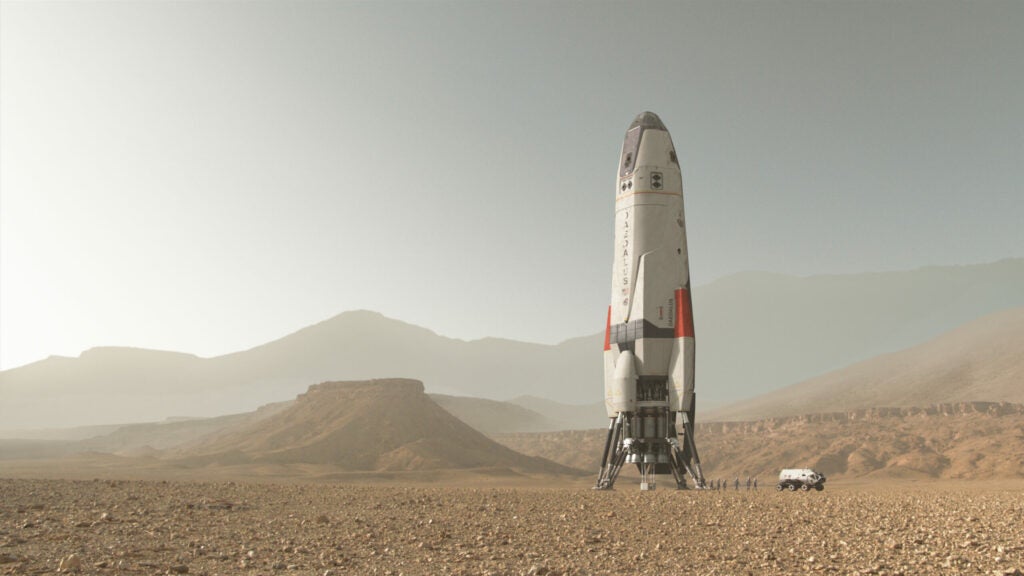 The fictional Daedalus spacecraft isn’t too far off from SpaceX’s concept drawings for the Interplanetary Transport System, which the company hopes will some day help set up a real life colony on Mars. Meanwhile, the rover pictured is pretty much right in line with what NASA has in mind for human transportation on Mars.

PS: In the series, the group that leads to way to Mars is a coalition of space-faring nations and aerospace corporations. Why not just have NASA do it?

RH: We felt that the most progressive idea that we could offer would be that private resources had been pooled in an international effort to do this thing. I think we wanted to de-politicize it, and also encourage that kind of thinking, and show that great entrepreneurs are willing to do it.

PS: Compared to making movies about past events, like with Apollo 13, what was it like making a documentary of the future? Especially since many of the details about the journey to Mars haven’t been finalized.

RH: There’s a tremendous amount of research that’s being done and it’s been going on since the Apollo era. Rocket scientists have been building on that for these last 50 years. No, we don’t know everything. A lot of it is conjecture. But there’s a hell of a lot that they feel they’re very certain of. So everything we tried to dramatize is inspired by what we’ve learned or through the interviews that we conducted.

BG: It axes on the same thing. It’s research, it’s meeting astronauts and people who are involved in space flight, in this case Elon Musk or Jeff Bezos’ people. There’s always research involved. In the case of Mars, one has to extrapolate on what that would look like to colonize, and so it’s very different. One is interpreting an actual event, and the other is prognosticating based on speaking to experts, whether it’s NASA JPL or one of these companies: what are the possibilities, what are the outcomes, what are the risks, all of those kinds of things.

RH: A great jumping off place was Stephen Petranek’s book, How We’ll Live On Mars. Everybody in the field thinks it’s very well researched, even if they don’t agree with every detail. So we worked with Stephen and utilized his book as a foundation.

PS: Would you go to Mars if you had the chance?

BG: I have a hard time just taking trans-Atlantic flights, so I don’t think I have the skill set for it. Ron would probably go. I wouldn’t.

RH: I wouldn’t go. It’s a huge commitment. But I interviewed Scott Kelly at the space station, and he said, “Well, I’ve spent now a year and a half in space, I don’t think so.” And then he waited and he said, “But if they thought they needed an old guy, I’d probably go.” It’s irresistible for a particular breed of human being, but I probably don’t quite fall into that category.