From Our Archives: Sign Up Here For A Trip To Space

In 1952, the Hayden Planetarium offered applicants the trip of a lifetime 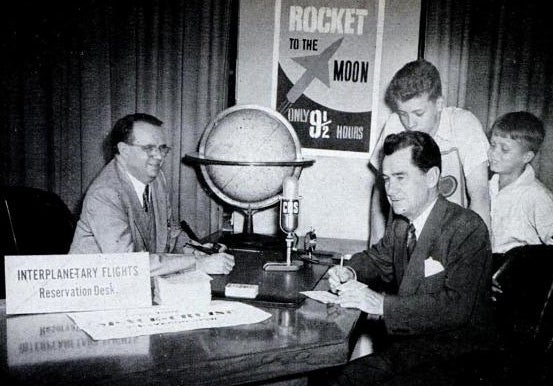 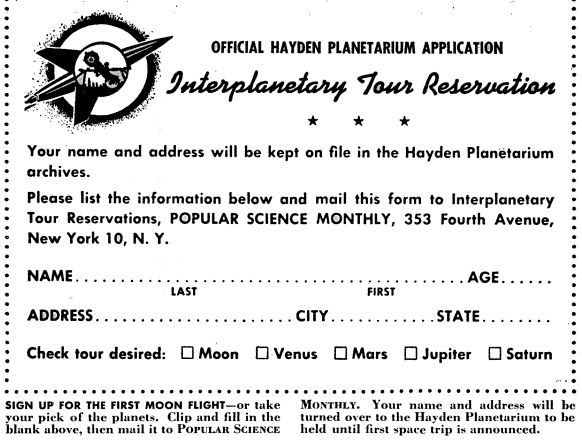 In 1952, Popular Science subscribers had the chance to mail in this application to be considered for a tour of space.

More than 60 years ago, an unassuming ad made big promises in the August 1952 issue of Popular Science.

As part of a publicity campaign, the Hayden Planetarium offered applicants an interplanetary tour of the Moon, Venus, Mars, Jupiter, or Saturn. Although the Planetarium made no promises, they planned to hold onto the reservations until the first organization to “set up commercial interplanetary tours” emerged, according to the Popular Science article about commercial spaceflight.

Hundreds letters from aspiring astronauts poured in, with Mars as the preferred planet among applicants. The Moon was another popular would-be destination, and the Planetarium prepared an advance briefing for potential lunar explorers. Passengers would only be allowed one pound of luggage, and they received warning about the shock of acceleration on the spaceship. They were to be strapped in for takeoff, and passengers with high blood pressure were advised that they “may experience a momentary blackout.”

When Peter Schroth applied, he was only 7 years old. Now 68, Schroth is a semi-retired lawyer in Queens. He doesn’t remember writing his letter, but he says he isn’t surprised he did.

“I was very interested in things like that at that age,” he says. “The following year my father and I started going regularly to the planetarium.” 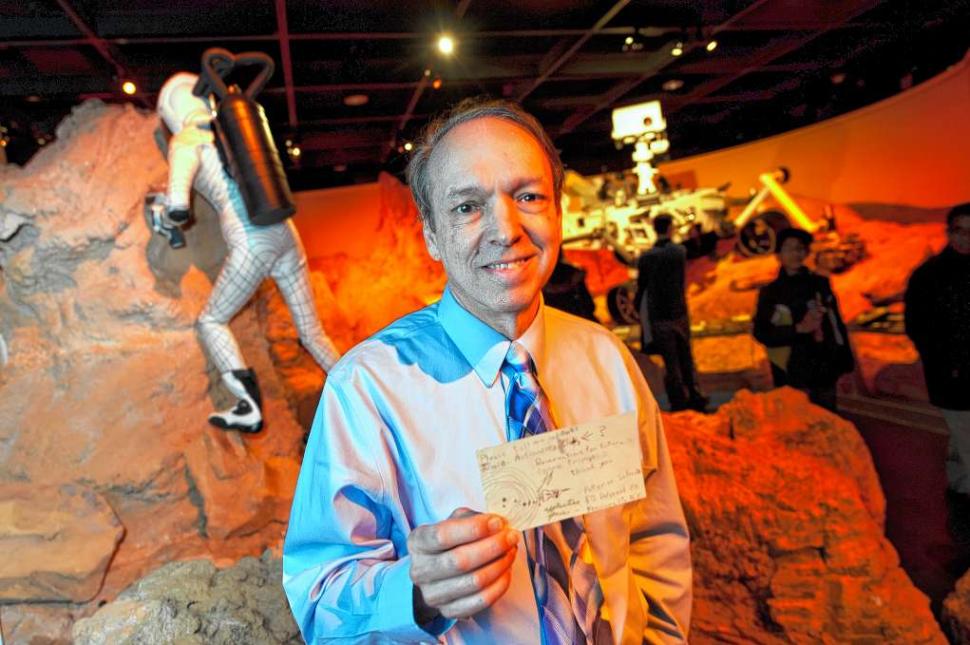 Peter Schroth With His Application

In 2012, the New York Daily News took this photo of Schroth at the American Museum of Natural History’s space exhibit.

Schroth says he never grew out of his fascination with science. Nowadays, he says though space travel is important, we should prioritize protecting of our planet from global warming. However, he would still jump at the chance to go to space (and spread his message about climate change while he’s at it).

“It would be great fun to do,” he says, “though it would make more sense for my children and grandchildren.”

Many applicants were older than Schroth at the time, but they were just as eager–one man planned to take his girlfriend to the Moon for their honeymoon. Others had some misguided perceptions of space. Arthur, who wanted to go to Venus, wrote, “I have always been interested in this planet, and would like to find out for myself if there are really dinosaurs living on it.”

A boy named Horace had a few practical concerns in mind: “Could you please notify me when the tour starts because I have to take a vacation from school. If I take my dog will you have to charge me an extra fare.”

Horace wasn’t the only one thinking about the down-to-earth matters. One woman wrote to Lloyd’s of London for insurance rates–not for herself, but to protect her precious jewelry, which she worried would be ruined in the Mars atmosphere.

Another applicant named Noel wanted to go to Mars, but he wasn’t about to wait around for scientists. He wrote, “If I decide to make the trip via flying saucer, you may cancel said reservation.”

According to the Robert R. Coles, then-Planetarium chairman, the oldest applicant was an 85-year-old woman from West Virginia. She wrote, “Hurry up with that space ship as I’m getting on in years.” Though Coles doubted she would make the trip, he thought some of the younger applicants might live to make the flight.

Sixty-three years later, we’re not taking family vacations to Saturn, but we’re much closer than these applicants were. In May, the House of Representatives passed the SPACE Act, which gives businesses property rights to asteroids that they mine. A few days later, NASA drew up a contract with a private company to send a Boeing spacecraft on a crew rotation mission in late 2017. That mission will bring new astronauts to the International Space Station, and it will bring home the ones already there.

For now, space travel is only an option for wealthier civilians. But if organizations like NASA and SpaceX have their way, ordinary citizens may visit or even colonize other planets sometime in the near future. Who knows? Maybe one 17-year-old applicant from Peru had it right: “I faithfully believe that someday [space travel] will be as common as driving an automobile.” 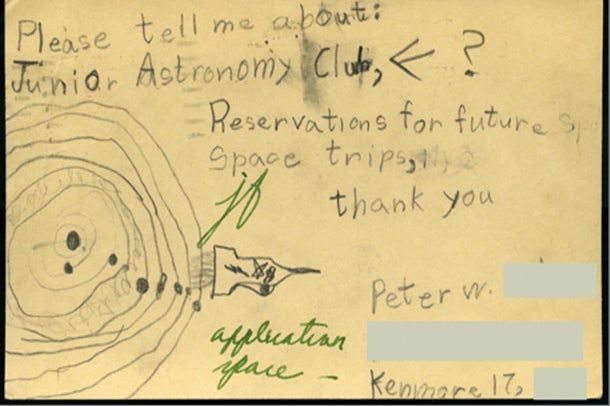 Seven-year-old Schroth wanted to know more about the “Junior Astronomy Club.” To see more applications from the 50’s, check out the American Museum of Natural History’s gallery. 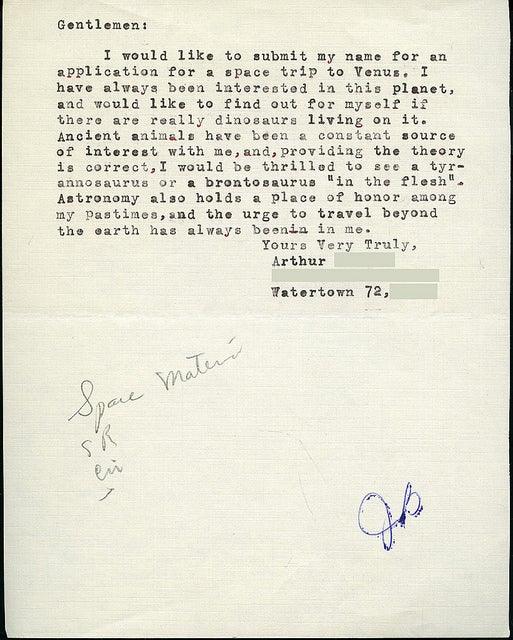 Arthur from Watertown thought he might find alien life in space, but not the kind you’d expect. 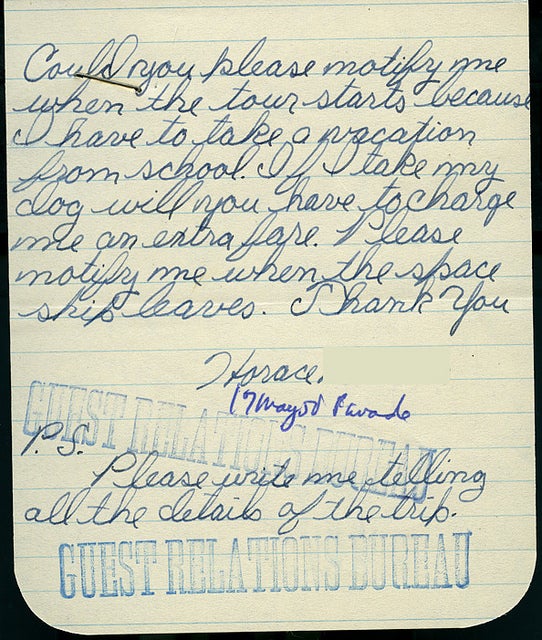 Plus One For A Puppy

Horace wondered if it would cost extra to bring his dog along on the trip. 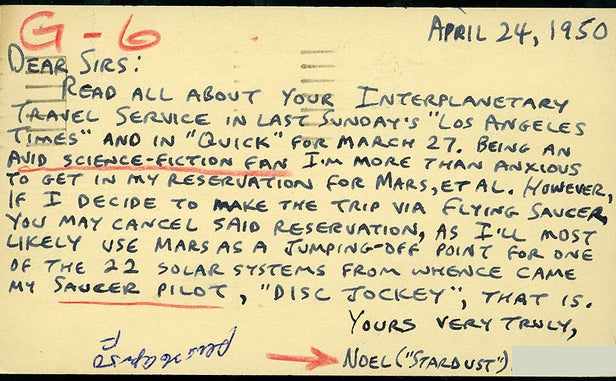 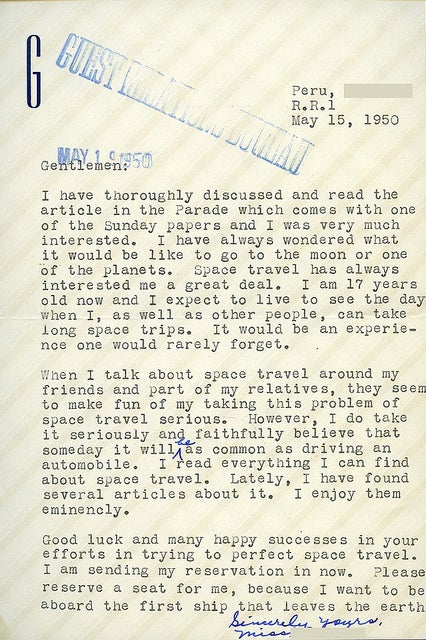 The Future Of Space Travel

Even though her friends and family teased her, this applicant from Peru was sure space travel would someday be “as common as driving an automobile.”
Space
archives
commercial space flight
galleries
human spaceflight
Popsci Archive