Next Year, NASA Could Get An Extra $500 Million And A Mission To Europa 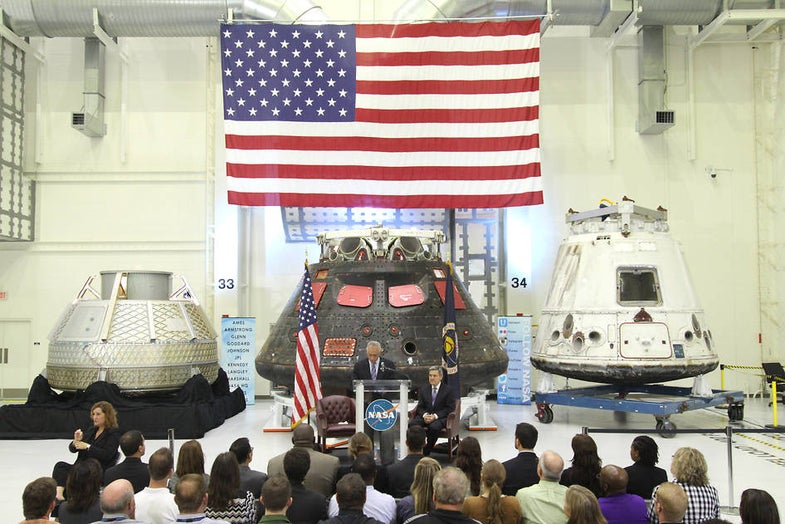 President Obama wants to give NASA’s missions a big boost. Monday afternoon, NASA Administrator Charles Bolden updated the nation on the state of its space agency, noting that the Obama administration is proposing an $18.5 billion budget for NASA for the 2016 fiscal year. That’s about $500 million more than the agency received for 2015.

The funds are aimed at covering the costs of NASA’s ongoing, manned deep-space exploration projects, such as sending astronauts to Mars. But money is also being set aside for some new, extremely exciting ventures. The project we’re most excited about is a trip to Jupiter’s moon, Europa; it’s a big candidate for finding potential life elsewhere in our solar system, and now that the White House has approved the mission, it can finally get started.

Of course, much of the money is focused on getting to our red neighbor first. About $8.51 billion of the proposed budget is allocated to human exploration, and a large chunk of that–$2.863 billion–will go toward the Orion Crew Capsule and Space Launch System. Dubbed NASA’s “monster” rocket, the SLS is currently in development at the Michoud Assembly Facility in New Orleans, and officials hope to use the vehicle to send the astronaut-carrying Orion to Mars sometime in the 2030s.

“[NASA] is firmly on a journey to Mars. Make no mistake, this journey will help guide and define our generation.”

“[NASA] is firmly on a journey to Mars. Make no mistake, this journey will help guide and define our generation,” Bolden said on Monday.

The rest of the human exploration budget is geared toward maintaining the International Space Station ($3.106 billion), as well as funding the space taxis that will transport American astronauts to the orbiting laboratory. Through the Commercial Crew Program, NASA awarded private companies SpaceX and Boeing with contracts to design and build crew vehicles that will ferry astronauts to and from the ISS. Under the proposed budget, the program will receive $1.244 billion for 2016, representing a $400 million increase from the 2015 Commercial Crew budget. Bolden says the increased allotment will help both companies reach the goal of operating space station flights by 2017.

Yet the really intriguing stuff lies in the budget for science, which will receive $5.288 billion. While $1.947 billion of that is going to Earth science (e.g. maintaining its SMAP satellite), $1.361 billion is going to planetary science, and that includes funding for a long-awaited robotic mission to Europa. The satellite is thought to house a vast ocean underneath its icy crust, leading many scientists to wonder if the waters are home to organic life. Although Congress gave NASA $100 million to start the design process on a Europa mission in 2015, the proposed White House budget will add on $30 million. And with NASA being an executive branch agency, President Obama’s approval means NASA can now get started on the project.

As always, Congress will meddle with the president’s budget request, so it’s doubtful the final version will look the same as this proposal. But the suggested increase spells good news for your average space enthusiast, indicating the executive branch better understands the significance of space exploration. Meanwhile, just remember: NASA’s budget still represents only half of a percent of the overall national budget.