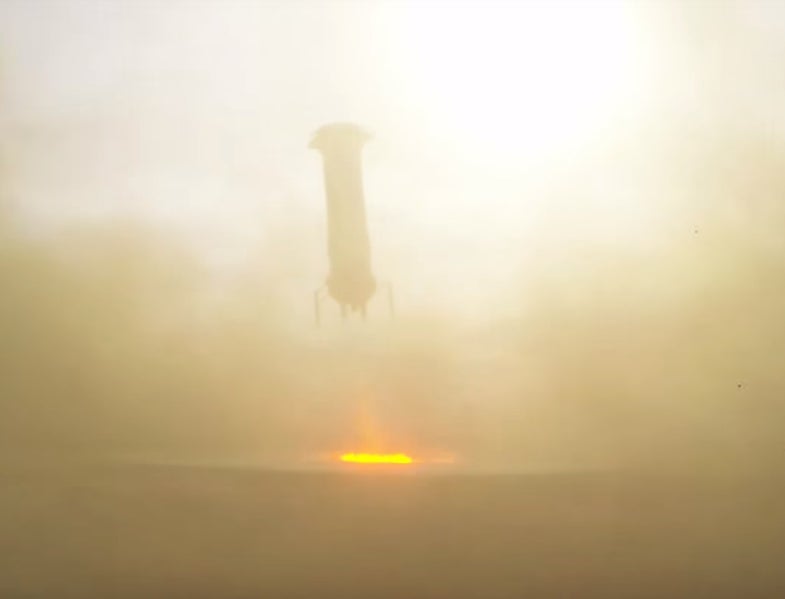 In an historic first, the private company founded by Amazon co-founder Jeff Bezos has become the first to land a reuseable rocket that’s traveled to and from space.

On November 23, 2015, Blue Origin’s New Shepard rocket launched 330,000 feet into the air. An unmanned crew capsule separated from the rocket on its way up, completing its own successful landing. Then the rocket grazed the lower reaches of space before returning to Earth and slowly touching down in a blaze of glory.

The company attempted a similar landing in April, but hydraulic problems prevented the rocket from achieving its vertical landing. Yesterday’s achievement brings the industry closer to reusable–and hopefully cheaper–spaceflight.

Blue Origin competitor SpaceX has been attempting similar landings with its Falcon 9 rocket (on floating landing pads in the Atlantic Ocean), but it hasn’t quite managed to stick its landing yet. SpaceX CEO Elon Musk took to Twitter early this morning to congratulate Blue Origin for succeeding in its vertical takeoff and landing (VTOL) test, but would like to point out that the rockets aren’t quite going high enough, or fast enough, to compete with his own company:

While the New Shepard rocket is designed to reach sub-orbital space, SpaceX’s Falcon 9 can get into orbital space–to deliver cargo shipments to the International Space Station, for instance– which it has done on several occasions. SpaceX also just last week received the second-in-history order from NASA for a private company to carry astronauts to the ISS in 2017 (the first was Boeing). New Shepard isn’t quite there—yet.

Up until now, all rockets have been designed for one-time use: spent rockets return to Earth by splashing into the ocean, never to return from the dark and watery depths. SpaceX and Blue Origin say that by reusing spent rockets, Americans can save a bundle on getting to and from space. And the first step to reusing a rocket is to get it safely back to Earth without drowning in the ocean.

SpaceNews reports that yesterday’s historic landing means Blue Origin is on track to begin launching research payloads in the middle of 2016, to be followed later by crewed flights.

New Shephard was a Best of What’s New award-winner this year in the December 2015 issue of Popular Science.

Correction 11/24/2015 at 10am: The original version of this article misstated the height of the launch.