All astronomers need is a flickering disk. 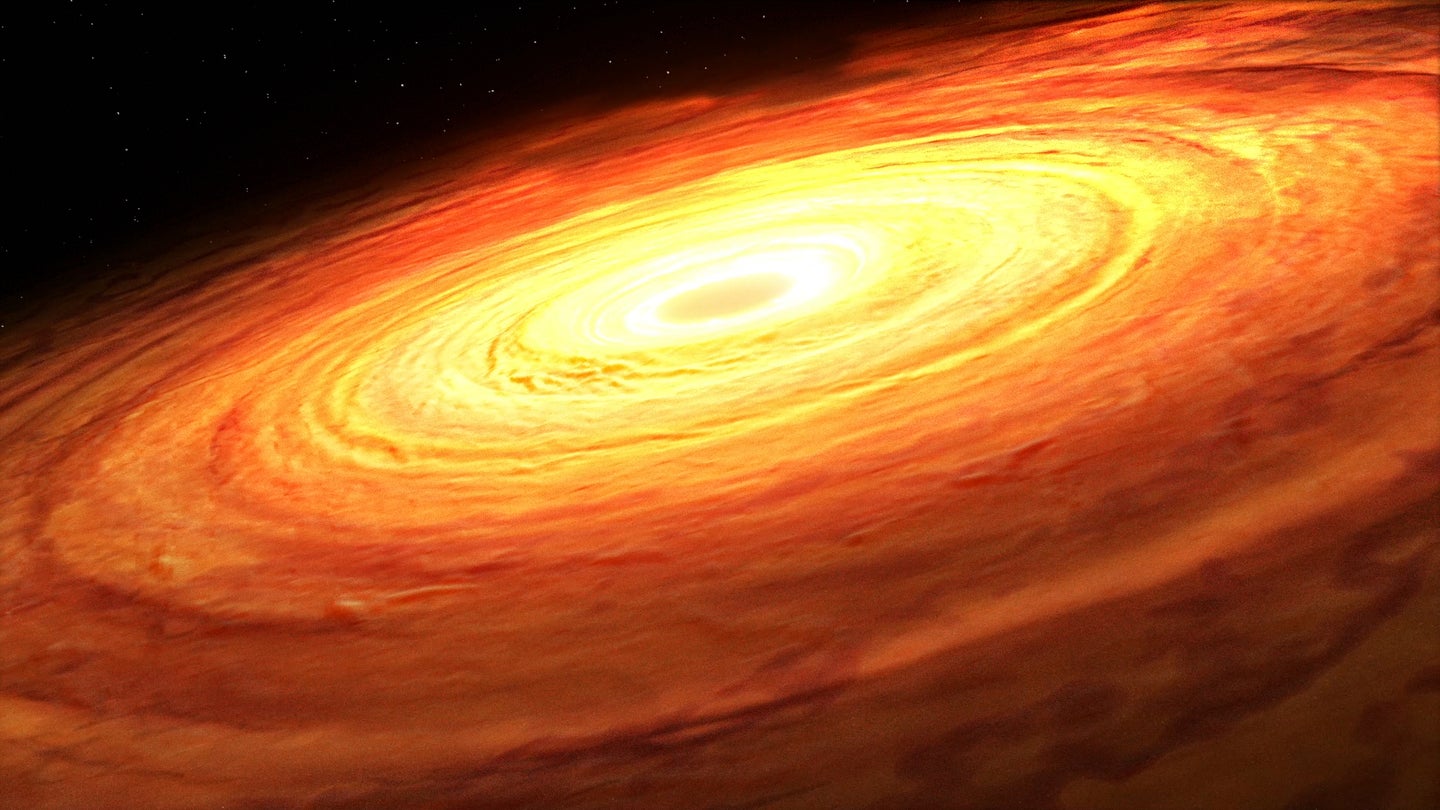 Many supermassive black holes cloak themselves in a bright “accretion disk” of hot gas and dust, the behavior of which may reveal the mass of the central black hole. Mark A. Garlick / Simons Foundation
SHARE

If researchers get to know just one thing about a black hole, most would probably want to know its mass. That’s what determines whether a black hole will form, and it’s what gives the object its inexorable gravitational pull. But weighing the exotic objects from light years away is no small feat, and astrophysicists have developed a variety of tricks to tease out the information they need.

Now a group of researchers has discovered a new technique—one that might work not only for the universe’s most gargantuan black holes, but also for certain small and dense objects like white dwarfs. Pulling off measurements of this type will take time, but the observations could eventually let researchers weigh many more giant black holes than before, helping physicists reach a new understanding of the behemoths that govern most galaxies.

“We could potentially use our method to get black hole masses for thousands” of objects, says Colin Burke, an astrophysicist at the at the University of Illinois at Urbana-Champaign.

Supermassive black holes and how to weigh them

Most galaxies are thought to have supermassive black holes—weighing millions to billions of times the mass of our sun—sitting in their centers and attracting disks of gas and dust. While the black holes themselves remain dark, these “accretion disks” shine brilliantly.

The main tool astronomers have for weighing these leviathans is to wait for them to flash, which happens at random times and for poorly understood reasons. Some of the light from a flash heads straight for Earth, while other light bounces off a donut of dust surrounding the black hole first. The longer the “echoed” light is delayed, the bigger the gas cloud and the heavier the black hole.

This “reverberation mapping” technique requires watching a supermassive black hole long enough to catch plenty of flickers, and carefully enough to split the incoming light into its different wavelengths. Astronomers have weighed a few hundred black holes this way, but each one can take weeks of dedicated observations from a powerful telescope.

Astronomers have long wondered if they could just get the mass straight from the accretion disk’s overall flickering, rather than fussing with the reverberations’ details. Some teams have found tenuous hints of a connection between a black hole’s mass and the accretion disk’s wavering light. But most studies focused only on the biggest of black holes—those weighing tens of millions to billions of solar masses—which all flicker in rather similar ways.

Burke and his collaborator, Yue Shen, and other researchers, decided to look at a different sort of black hole: a mere 10,000 solar mass pipsqueak at the heart of well-known dwarf galaxy. The flicker of its surrounding disk, according to data from a NASA satellite, was completely unlike the light from the largest behemoths. Encouraged that they were on the trail of a connection between mass and flicker, they published their findings last year.

To find more examples, they scoured the historical record for data describing as many supermassive black holes as possible. The flashes from an accretion disk can last for days to weeks, so they needed years of brightness observations for each black hole. The group wove together readings from every long-running sky survey they could get their hands on, including the Sloan Digital Sky Survey, the Zwicky Transient Facility, and the Dark Energy Survey.

“We used light curves that go way back to 1998,” Burke said. “We had to do a lot of work to combine data from over 20 years to get long enough [coverage].”

Once they had the data, a universal pattern became clear. The disks around huge black holes took much longer to settle down after a bright flare than those around lighter objects. Burke likens the effect to a bonfire burning more steadily and flickering more slowly than the fickle flame of a candle.

By timing how quickly an accretion disk tends to return to its standard brightness, researchers can figure out how heavy the central black hole is. The team found that in this respect, black holes ranging from roughly tens of thousands to billions of solar masses all behave the same way. They described their findings Thursday in the journal Science.

The pattern doesn’t stop there. When Burke and his collaborators included white dwarfs—burnt out stellar cores—they discovered that their tiny accretion disks flare in a frantic manner befitting their comparatively minuscule stature. White dwarfs weigh in at just one solar mass or so, meaning the pattern holds across a range of masses as vast as the difference between a bacterium and a blue whale. Burke suspects similar relationships may hold for any object ringed with the right sort of disk, from infant solar systems to neutron stars.

“There’s something cool when you have a universal principle that’s just a matter of geometry,” he says.

Future groups won’t have to labor nearly as hard to carry out similar analyses. When the Vera C. Rubin Observatory comes online in the next couple of years, it will scan the entire sky every few nights, eventually assembling a vast catalog of celestial pinpricks and recording how each flickers—precisely the data astrophysicists need to weigh thousands of black holes with the new method.

Amassing more masses could help researchers understand the intimate but mysterious connections between black holes and their host galaxies. The modest seeds somehow control temperature and star formation throughout the vast galactic area surrounding them, for instance.

Burke hopes to use the pattern to explore the sparse no-man’s land between black holes weighing a few solar masses and supermassive black holes. The universe’s giant black holes may have grown from so-called intermediate mass black holes, and yet the goldilocks objects appear to be few and far between. But if they have accretion disks, the new light-mass relationship will put a mark on their backs.

“Now we know what to look for,” Burke says.