Observations of distant gassy discs show how giant gas planets form along with their stars. 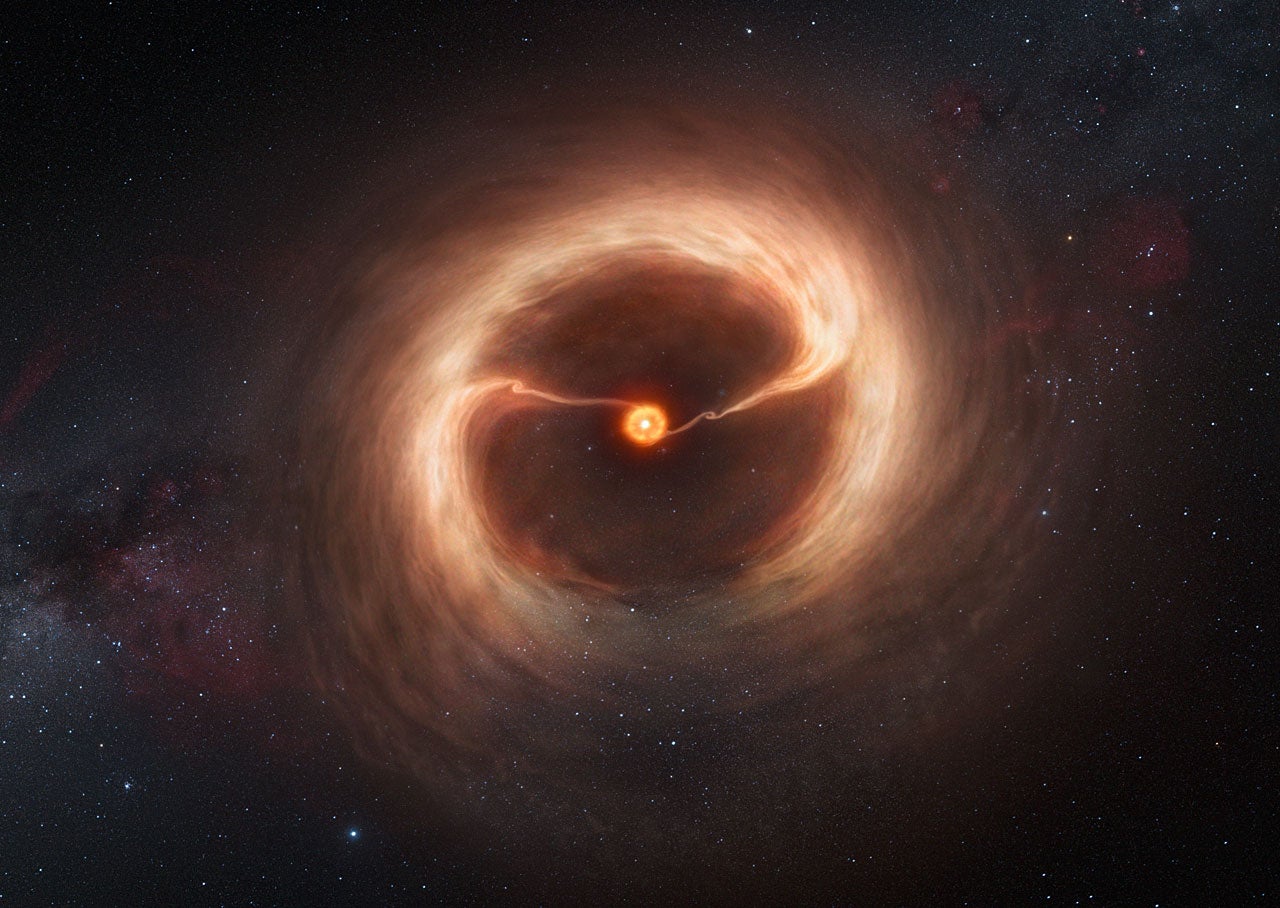 This artist’s impression shows the disc of gas and cosmic dust around the young star HD 142527. Astronomers using the Atacama Large Millimeter/submillimeter Array (ALMA) telescope have seen vast streams of gas flowing across the gap in the disc. These are the first direct observations of these streams, which are expected to be created by giant planets guzzling gas as they grow, and which are a key stage in the birth of giant planets.
SHARE

As young stars form, they hoover up dust and gas around them, and the remaining material spins into a flat, rotating disk. Planets start out as small clumps in that disk, and those clumps collide with other small clumps, eventually adding to their masses. As a result, baby star systems often appear as a dot in the middle, surrounded by a dark gap and then a dusty disk. But somehow, as this process unfolds, the stars continue to grow too. This is hard to explain–how, if the planets are gathering up the stuff around them, is any of the stuff getting to the star?

The ALMA telescope, the largest radio telescope on the planet, is providing some answers. New observations of a young star system about 450 light years away show the planets and stars sharing gas, with bridges stretching from the dusty gas disk all the way to the star.

The disk itself is made up of two portions, an inner section near the star and an outer section where planets are forming. If this were our solar system, the inner section would stretch to roughly the orbit of Saturn. The outer disk starts 14 times farther away and is roughly two light-days across. The ultra-distant Voyager 1 probe–just about to leave the boundary of our sun’s influence–would be near the inner edge of that disk.

ALMA first detected thin traces of carbon dioxide in the gap between the disks. There wasn’t any dust in the gap, which conforms to planetary formation theory, but ALMA’s high sensitivity was able to detect the CO2. Then ALMA also saw some streamers, connecting the disk to the star like spokes on a wheel. These streamers are formed by the planets’ gravitational pull; they are drinking in gas from the outer portions of the disk. But most of the gas overshoots the planets, allowing the star to take it back and continue growing. These are the first direct observations of these streams, whose presence has been inferred by computer models.

This is what ALMA saw: 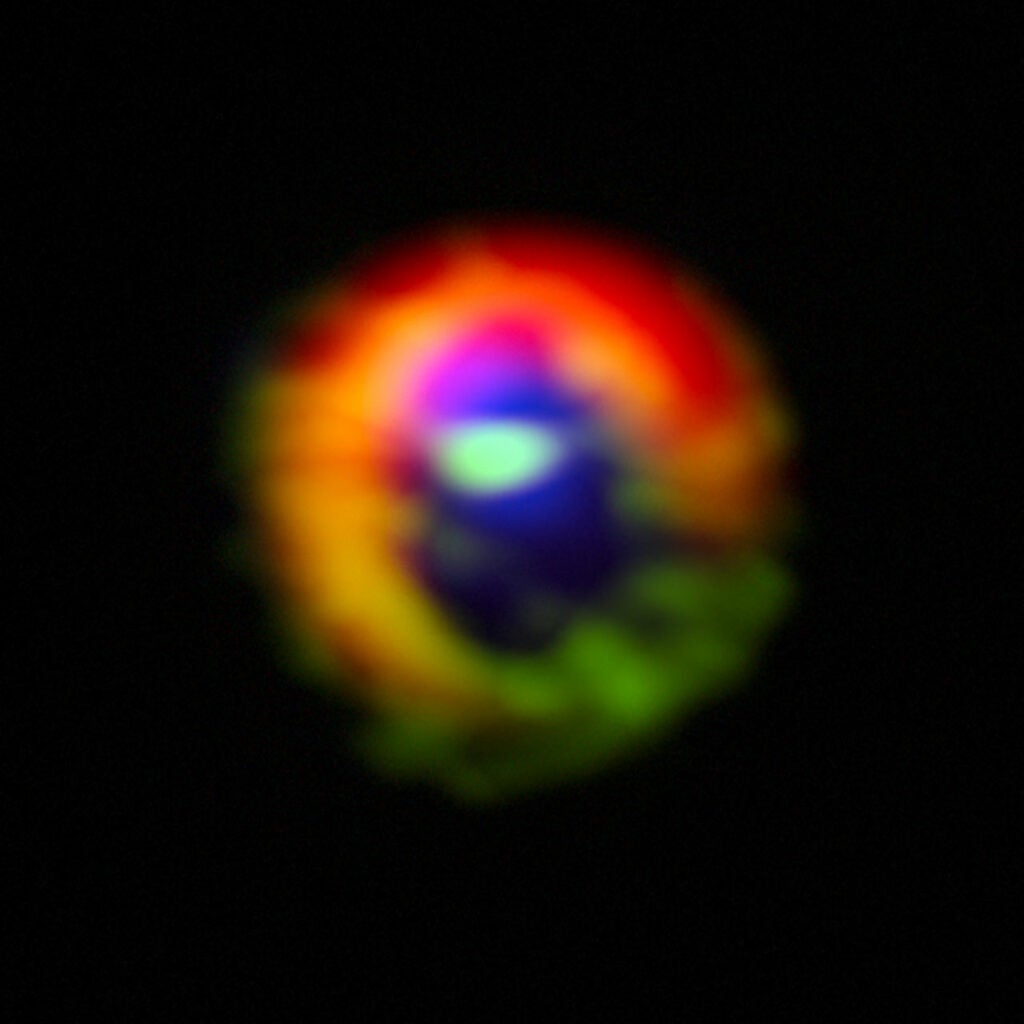 Observations made with the Atacama Large Millimeter/submillimeter Array (ALMA) telescope show the disc of gas and cosmic dust around the young star HD 142527. The outer disk is roughly two light-days across. If this were our own Solar System, the Voyager 1 probe — the most distant manmade object from Earth — would be at approximately the inner edge of the outer disk.

The dust in the outer portion of the disk is shown in red. Dense HCO+ gas, or Formyl, is shown in green, and diffuse gas in the central gap is shown in blue. The gas filaments can be seen at the three o’clock and ten o’clock positions, flowing from the outer disc towards the center.

Simon Casassus of the University of Chile and the Millennium Nucleus for Protoplanetary Disks led an international team of astronomers who observed this system, called HD 142527. Without the streamers, the inner disk would be depleted within a year, they found. But with the streamers, there’s enough gas moving around to maintain the inner disk, and to feed the hungry growing star.

The planets are inside the dense streams of gas falling toward the star, which also obscures them from view. They are likely several times larger than Jupiter. The paper describing these findings publishes today in Nature.