How It Works: Death By Black Hole 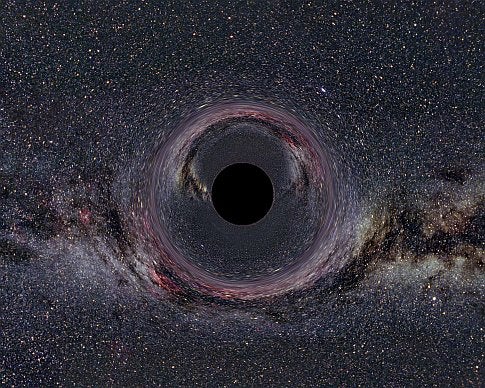 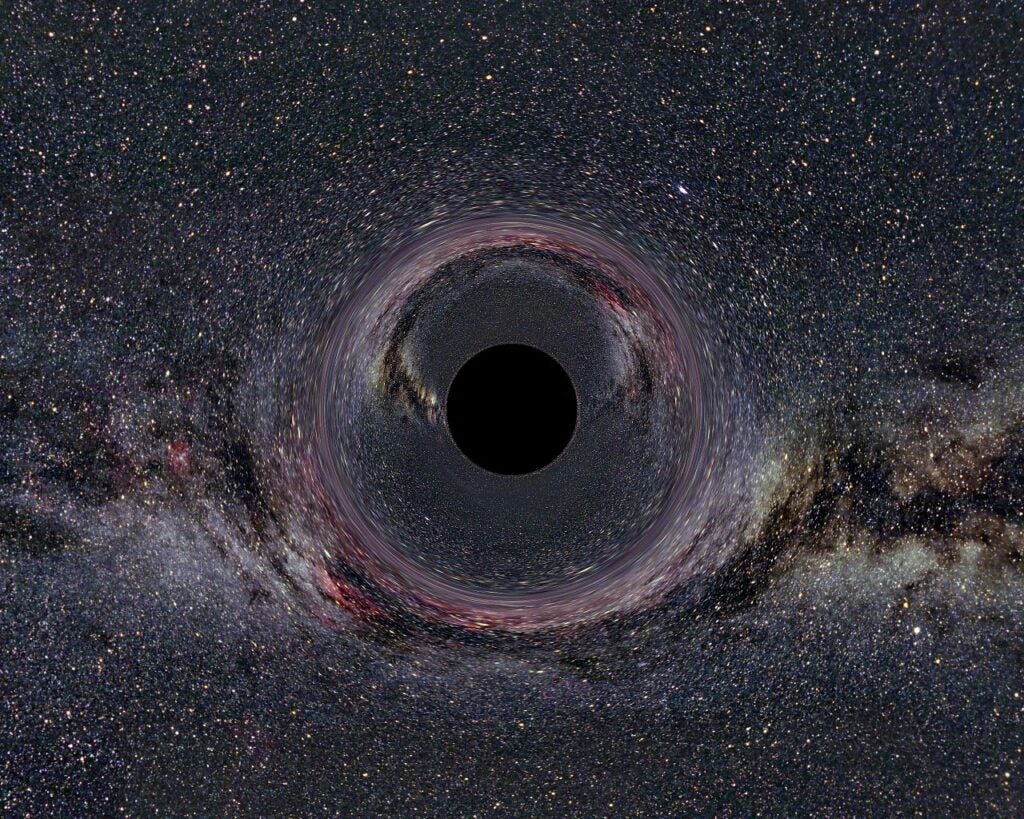 As you fall feet first across an event horizon—the point where nothing can escape the black hole’s gravitational pull—you don’t feel anything change. But eventually, gravity is so much stronger at your feet than your head that you’re stretched apart, like Play-Doh, until you snap. Or at least, that’s the picture physicists drew after Einstein proposed his theory of general relativity in 1915. In the past few years, new possibilities for your untimely end have emerged.

The thought experiments attempt to resolve a paradox that physicist Stephen Hawking outlined in the 1970s. He showed that in their current forms, the two major pillars of physics—quantum mechanics and general relativity—can’t both be true near a black hole. General relativity governs how very massive objects work, while quantum mechanics governs how very tiny objects work. In most of the universe, physicists can choose which set of rules to apply—general relativity for a galaxy cluster, quantum mech­anics for a particle accelerator—but a black hole is both very massive and very small.

And that’s what makes this riddle so interesting. If physicists can answer the question of death by black hole, they’ll be much closer to merging the two pillars into a single theory of quantum gravity, says Joe Polchinski, a theoretical physicist at the University of California at Santa Barbara who’s working on the problem. “Ultimately, we’re looking for a theory that unites the forces of the universe.”

The current debate revolves around how black holes handle entangled particles—entities whose properties are quantum-​mechanically linked—when one of them falls across the event horizon. It’s akin to considering a human’s fate, but more intriguing to physicists. You can think of the particles as a pair of dice where when one is rolled, the other magically rolls itself so the sum of the two is always seven. Each particle can only be linked this way to a single partner—physicists call them “monogamous.” 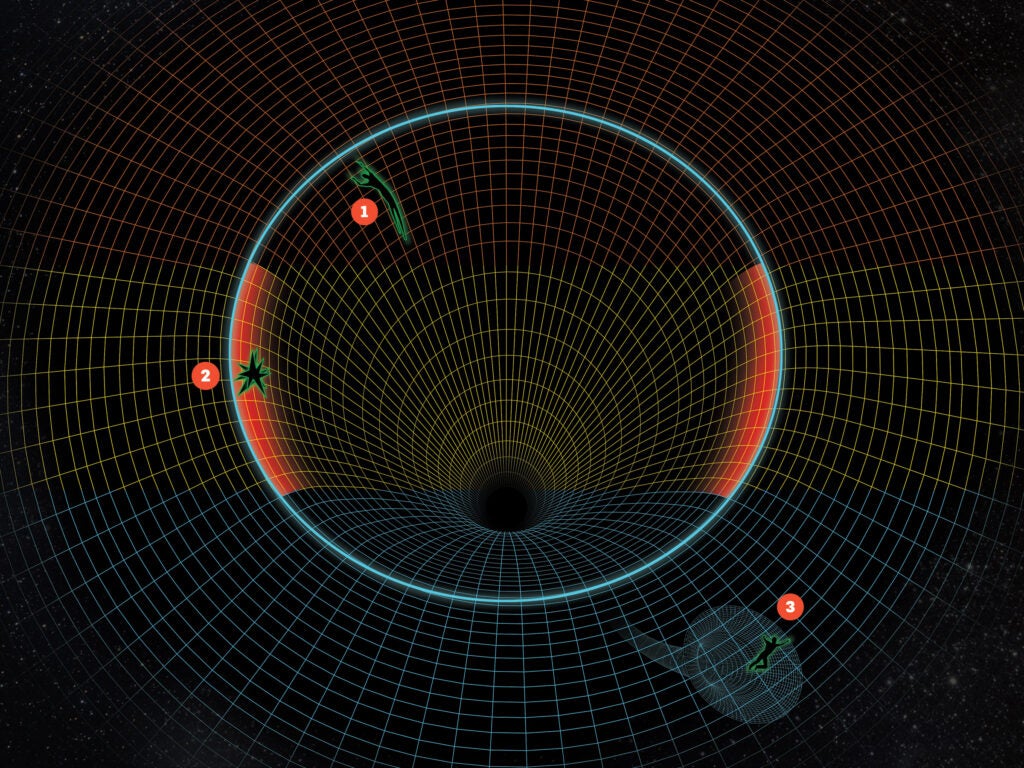 According to general relativity, nothing can escape black holes, so they should only get bigger over time as they swallow up detritus. But in the 1970s, Stephen Hawking pointed out that thanks to a quirk of quantum mechanics, matter actually can escape. Quantum mechanics says pairs of particles constantly pop into existence and immediately self-annihilate. When a pair forms at the event horizon, one can fall into the black hole while the other drifts off instead of disappearing. That particle effectively carries some matter away, and eventually, the black hole will evaporate entirely.

This small quantum mechanical effect—dubbed Hawking radiation—has big implications that physicists are just now puzzling out. Those particles are linked like the magic dice that always add up to seven. Once the surviving particle loses its partner across the event horizon, it would link itself to a new one. But according to relativity, the particle inside the event horizon doesn’t know anything’s changed, so it still thinks it’s happily linked to its partner. There’s a monogamy problem, because the surviving partner can’t be linked both to a new particle and the old one.

In 2012, researchers at the University of California at Santa Barbara proposed a solution to the mono­gamy problem. What if the surviving partner gave up its entanglement with its original partner when that particle disappeared across the event horizon? The divorce would keep quantum mech­anics happy. A firewall would develop just beyond the event horizon because each breaking link would create a little burst of energy, like a breaking chemical bond. Collectively, the energy makes a wall of fire that would incinerate anything that fell across the event horizon.

To construct the firewall, physicists had to abandon one of the original properties of a black hole: that an observer falling across the event horizon feels nothing change—a principle colorfully known as “no drama.” The firewall rankles many physicists, but most agree that the scenario is useful for teasing apart the subtle problems quantum mechanics causes for black holes. Polchinski, one of the authors of the firewall paper, agrees that they probably aren’t the final answer. “Odds are the original picture is still right,” he says. “Even though we don’t know why.”

A pair of physicists at Princeton and Stanford proposed another possible solution. What if, they posited, the surviving particle’s two partners—the old one inside the event horizon and the new one outside it—were actually the same particle? What if the swallowed partner encountered a wormhole inside the black hole that allowed it to pop out somewhere else? The surviving particle could link up with it, thinking it’s found a new partner, while the swallowed particle wouldn’t notice anything had changed (apart from finding itself in a different part of the universe).

The wormhole offers a seemingly clean solution to the paradox. “It’s a bit like a B movie where you never see person one and person two together, so they must be the same person,” says Raphael Bousso, a physicist at the University of California at Berkeley. But the caper may be impossible to pull off, because the approach conflicts with quantum mechanics in other ways, Bousso says. “I don’t find it as promising as others do.” So the debate continues.

Not Your Galaxy’s Black Hole

The light-sucking singularities described here are theoretical, not the very real super­massive black holes that lie at the center of the Milky Way and other big galaxies. These quantum black holes need stable, isolated environments. Plus, their quantum-​mechanical properties can take longer than the age of the universe to appear. That means there’s no chance of testing many of the death-by-black-hole theories experimentally, says Don Page, a theoretical physicist at the University of Alberta who worked with Hawking. “They develop so late there wouldn’t be people left to test them. Of course, you’d be kind of crazy to fall into a black hole anyway.”