To Improve Astronomic Measurements, Scientists Want To Launch A Light Bulb Into Space

Before you can peer back in time 13.2 billion years, your telescope needs to be calibrated correctly, so you can... 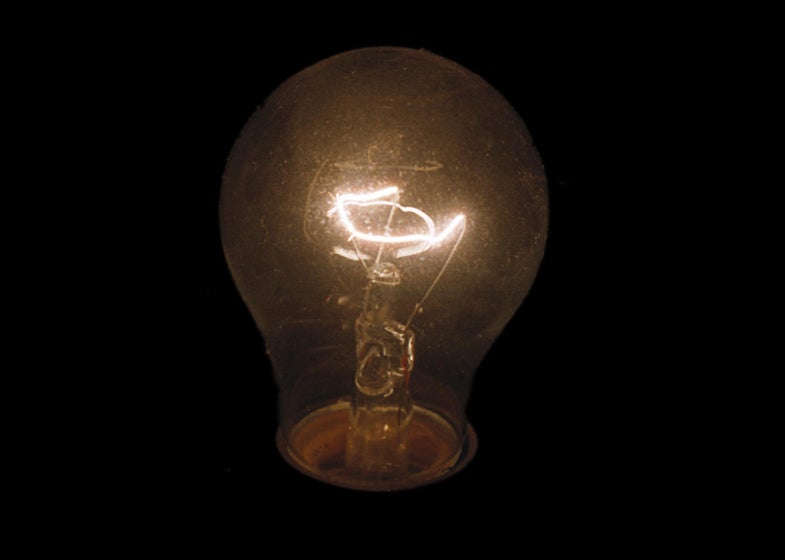 Before you can peer back in time 13.2 billion years, your telescope needs to be calibrated correctly, so you can be sure objects in your mirror are really as bright (and therefore as distant) as they appear. Astronomers have a few tricks to help them do this, including using light bulbs and distant stars. Now one astronomer has a simple calibration solution: put a light bulb in space.

For both ground-based and space-based telescopes, the atmosphere adds some uncertainty, because it absorbs some light and can affect telescopes’ measurements. (Orbiting telescopes don’t look through the atmosphere, of course, but you can’t cross-check their calibrations from Earth without its effects.)

When you want to get really precise data, you would want to know how much light is absorbed. To solve this problem, Justin Albert at the University of Victoria in Canada proposes putting a light bulb in orbit. Astronomers would know how much light the bulb emits, and by studying it from the ground, they could work out how much of that light is absorbed by the atmosphere, and therefore how it affects their deep-space studies.

Albert says you could use a standard 25-watt bulb, which would be as bright as a magnitude 12.5 star, a pretty dim object but one that would be easily identifiable by most telescopes. You would have to account for extra brightness from moonshine and earthshine, but this can be done by painting part of the light bulb black or by performing some basic calculations, he says.

Or you could use a tunable laser, but this would be more complex because you would have to move it around to shine at each telescope you want to calibrate. There’s actually just such a laser on the CALIPSO satellite, which studies clouds and aerosols by measuring the reflection of a green laser beam pointed at Earth. Albert has been photographing the laser light to prove his theory, as Technology Review’s arXiv blog points out.

Light bulbs in space is not that odd an idea — many earth-observing satellites carry tungsten-filament bulbs, just like the energy-inefficient one in your reading lamp, to help them properly measure light. The Hubble Space Telescope has tungsten and heavy-hydrogen bulbs on board. The problem is their brightness can change with temperature fluctuations, and there’s no way to cross-check Hubble’s results by comparing its light bulbs with ground observations. A light bulb in space would help solve that problem.

It may be most important for measuring the universe’s expansion. Astronomers have long used distant Cepheid variable stars as “standard candles,” because they pulsate with a beat that is related to how bright it is. Astronomers can essentially take the stars’ pulse and figure out how bright it would look if they were standing next to it. By measuring how bright it actually looks from Earth, you can figure out how far away it is. Cosmology studies rely upon these observations. But a new study published this month shows that these Cepheid variables can lose mass, which affects how bright they look. Astronomers will need to correct for this effect in their calculations.

Better measurements of this phenomenon will require better calibration, Tech Review notes. A light bulb in orbit could be a simple way to do it. Along with some colleagues, Albert is developing a high-altitude balloon to carry a light bulb aloft so he can study his theory.