How A Black Hole Sleeps

It ate a bunch of stellar gas and now it needs a nap. 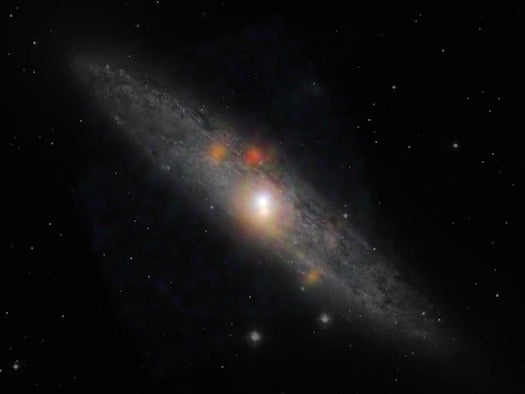 Think of black holes as bottomless devouring machines? Not so much, it turns out: the black hole at the center of the Sculptor galaxy, about 13 million light years away, is currently taking a wee little napsy.

We first spied this black hole about a decade ago, when it was happily chomping away on a bunch of excess material in its galaxy. But a new look at the black hole from NASA’s Chandra observatory and the NuStar satellite shows that it appears to have gone dormant sometime in the past few years.

Our understanding of black hole behavior is not very complete. We know that they can be found in the center of many, if not all, large galaxies, feeding off what are called “accretion discs,” basically a bunch of material swirling around a center. That material is often the result of star formation–and yet over in the Sculptor galaxy, amid lots and lots of star formation, the black hole appears to be dormant. As material falls into a black hole, it emits X-rays. NuStar is now picking up minimal X-rays from the region, indicating the black hole has gone quiet. NASA isn’t really sure what’s going on. From the press release:

The image above shows a composite of lots of images of the galaxy, with the color indicating what’s going on. If there was an active black hole, feeding on material, it’d be colored blue–yet there’s much more red and orange, which indicate low-to-medium-energy X-rays.

Read more about this sleepy black hole over at NASA.