Thanks to a new world-spanning algorithm 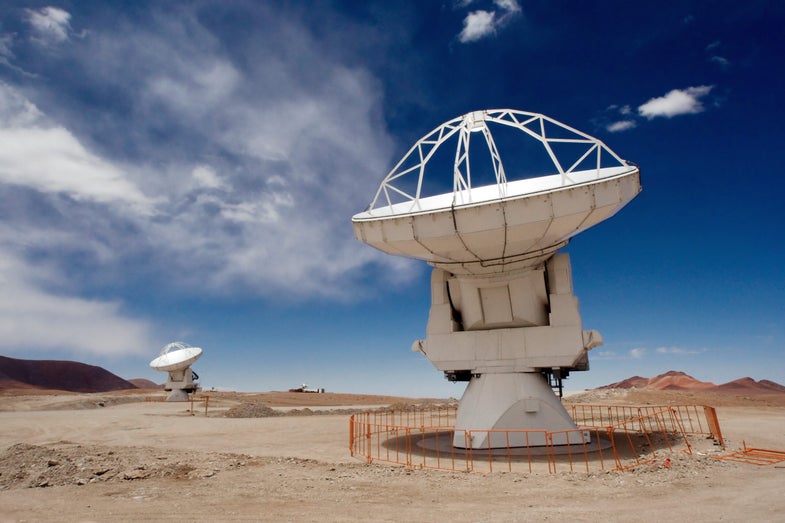 Humans have never actually seen a black hole with our eyes. A new computer algorithm, created by MIT graduate student Katie Bouman and her team, will hopefully change that.

Since black holes are surprisingly small, we need a gigantic telescope to look at them. The supermassive black hole at the center of our Milky Way galaxy is only about 17 times the diameter of the sun, according to an article published in BBC News, but it’s 25,000 light years away… that’s far. The smaller and further away the things we want to see are, the bigger the telescope we’d need.

“If you had a telescope the size of the entire earth you could get a picture of what a black hole looks like,” Bouman told Popular Science. We don’t really have the room for a telescope that big, though. Instead, a group of telescopes run by the Event Horizon Telescope project are taking data simultaneously from a multitude of telescopes scattered around the planet, and scientists will combine all that data as if they were looking at one giant telescope, a method called Very Long Baseline Interferometry, or VLBI. The next issue is how to turn that messy data, muddled by our own atmosphere and received at different times, into pretty pictures.

The MIT group’s CHIRP (Continuous High-resolution Image Reconstruction using Patch priors) algorithm is meant to solve this problem. CHIRP uses lots of other images from space as references to craft a sort of mosaic that best matches the data from the telescopes. There are other algorithms to figure out what the VLBI data looks like, but they create blurry pictures or struggle to handle the large amount of VLBI data. CHIRP is good at picking out what was actually important data and what was trash, and better than the competition at turning practice data into sharp pictures.

The scientists are looking forward to getting all the Event Horizon Telescope data, and will continue updating their algorithm to include other factors, like how the black holes change over time, or their magnetic fields. “Ultimately we might be able to make movies of materials being eaten by a black hole,” Michael Johnson, who also worked on the paper, told Popular Science. Let’s hope so.

Bouman has released the test data and other tools online, where enterprising programmers can try to create their own algorithm to unpack the Event Horizon Telescope data. She herself comes from a computing, rather than a physics, background, and feels imaging a black hole is an important problem that can be solved with help from other non-physicists.

“In the end I’d like to excite people in the computational imaging and computer vision communities to work on this problem, too.”

The researchers will show off their algorithm at the Computer Vision and Pattern Recognition conference in June.