Nothing (or almost nothing) can escape a black hole 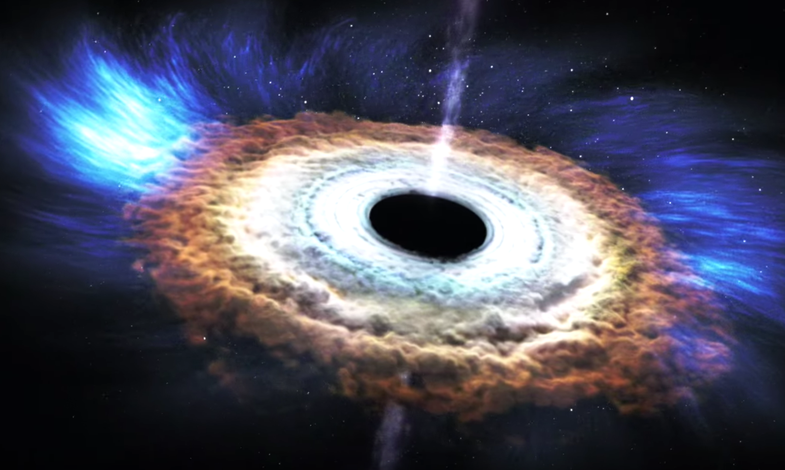 Black holes got their name because it used to be assumed that nothing could escape from them, not even light. There are some challengers to that notion. Stephen Hawking suggested decades ago that heat might radiate from a black hole, and recently he suggested that information could escape as well. There may be a few quantum methods to recover information from a black hole. But, for the most part, things that come into contact with a black hole are swallowed into oblivion–in some cases, it just takes a little while for the black hole to get it all down.

That’s what’s going on in the video above. NASA created this animation based on observations of a supermassive black hole in a galaxy 290 million light-years away. The animation shows a star getting torn apart by the black hole’s gravity.

“The black hole tears the star apart and starts swallowing material really quickly, but that’s not the end of the story,” said Jelle Kaastra, co-author of an accompanying study published in Nature. “The black hole can’t keep up that pace so it expels some of the material outwards.”

That material is the glowing ‘cloud’ you see in the video. The researchers found that some of the scattered remnants of the star are moving away from the black hole like wind. Unfortunately for the gaseous remains, they aren’t moving fast enough to escape.

Events like this, where a star is interacting with a black hole, are called tidal disruptions, and can give off x-rays that scientists can observe for years. While scientists had observed tidal disruptions before, they’re still learning about the mechanics of how they form. More observations of these dramatic star deaths could give us a greater insight into how black holes work, while allowing us to keep a safe distance. 290 million-light years is close enough for comfort.