A new kind of space weather 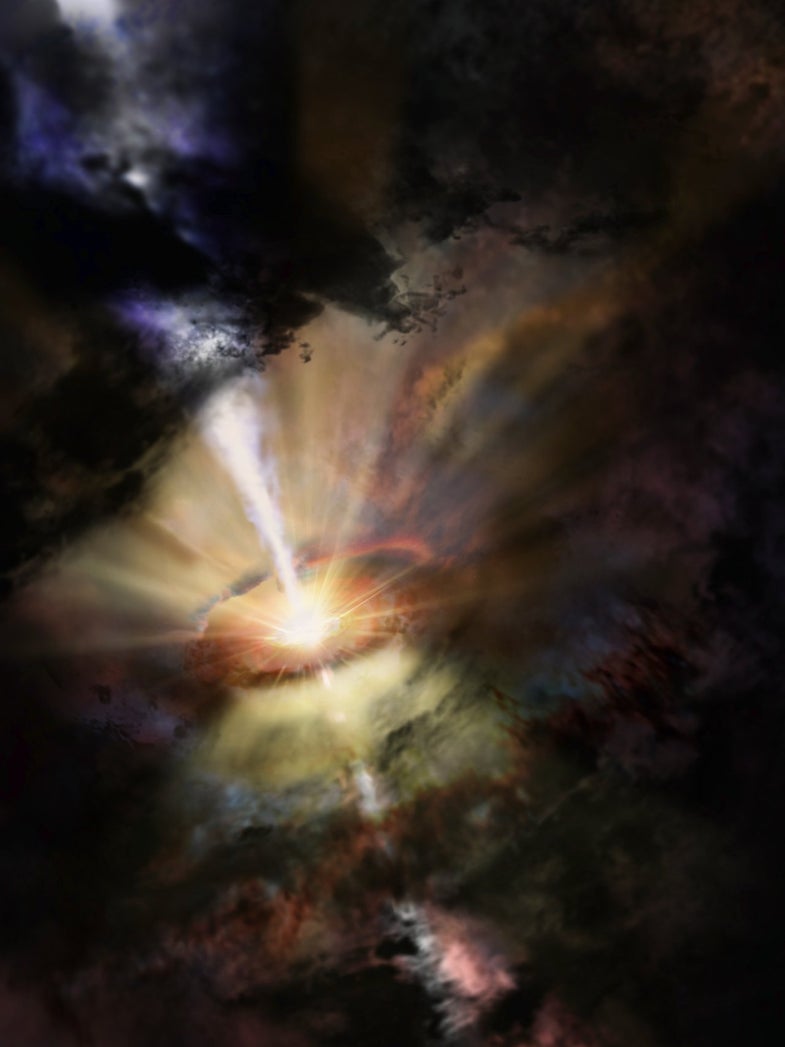 Deep in the heart of the Abell 2597 Brightest Cluster Galaxy, astronomers see a small cluster of giant gas clouds raining in on the central black hole. They were revealed by the billion light-year-long shadows they cast toward Earth. These ALMA data present the first observational evidence for predicted chaotic cold accretion onto a supermassive black hole.
SHARE

A billion light years away, there’s a galaxy dealing with some rough weather, unlike anything us earthlings have ever dealt with before.

Scientists once thought supermassive black holes were surrounded by hot gas, but have now observed one with pockets of cold gas that “condense” out of the hot gas and “rain” into the black hole. The group at the Atacama Large Millimeter/submillimeter Array (ALMA) in Northern Chile will release their results in Nature tomorrow. Grant Tremblay, Yale researcher and first author of the study, thought it looked really cool.

“It was extraordinarily surprising,” he told Popular Science. “It’s one of the more beautiful observations I’ve ever seen.”

Scientists have long thought that supermassive black holes were surrounded by gigantic, uniform hot balls of gas, around 20 million degrees Celsius (which is around 40 million degrees Fahrenheit). However, a group of scientists at ALMA noticed that clumps of cold gas, around 10 Kelvin (-440 degrees Fahrenheit, -263 Celsius) were condensing and falling towards the center.

Scientists are calling the new space weather “rain,” but don’t be fooled, it’s not rain. It’s super-cold gas bubbles falling out of a super-hot cloud and rushing towards a black hole at sixty seven thousand miles per hour, a billion light years away.

Numerous studies have predicted this weather pattern, said Tremblay, but this is the first time it’s actually been observed. He spotted the cold gas bubbles by looking at the brightest galaxy in the center of the Abell 2597 galaxy cluster, and then noticed the shadow that the gas bubbles were casting on Earth — basically, these cold masses were getting in the way of the energy reaching us from the black hole. He could tell the gas bubbles were falling into the black hole because they were redshifted, meaning that their light rays were stretching out before they hit us, and looked redder than the scientists expected. If the gas bubbles weren’t moving, we wouldn’t expect their light to turn red.

Tremblay cautioned that they can’t generalize this weather to happening in all galaxies. The discovery only proves that the predicted weather pattern can really happen, and will motivate the group at ALMA to look for the weather happening in other galaxies.