Scientists from the Harvard-Smithsonian Center for Astrophysics and Johns Hopkins University report seeing a phenomenon we’ve all imagined: a black... 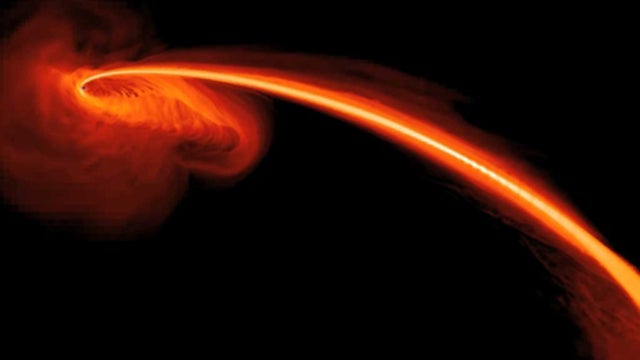 Scientists from the Harvard-Smithsonian Center for Astrophysics and Johns Hopkins University report seeing a phenomenon we’ve all imagined: a black hole devouring a star.

Interestingly, the scientists who observed the black hole’s meal compared it to a shark: neither, says Ryan Chornock of Harvard-Smithsonian, are unstoppable eating machines. Black holes actually lie dormant for long periods of time, until a space object passes a little too close–and then it pounces, which can set off a feeding frenzy. This particular star, probably a red giant, had already once passed too close to the black hole, losing everything but its core.

The team monitored the black hole by noticing that when the black hole pulls in gaseous material from around a larger object like a star, it superheats that material so it glows very brightly–which can be monitored with a system like the Panoramic Survey Telescope and Rapid Response System (Pan-STARRS), which is easier than building a telescope the size of planet Earth. The image above is a computer simulation of just that.